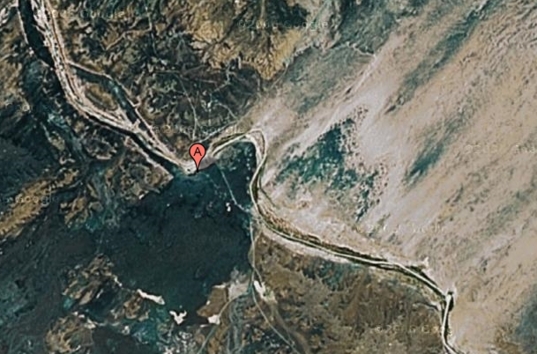 An aerial view of Grand Falls and the dune field that we visited. Grand Falls is indicated by the marker. You can clearly see where lava blocked the previous course of the river.

Today we visited Grand Falls and the nearby dune field. Grand Falls is especially interesting because it combines many of the processes that are active in shaping planetary surfaces. The falls are the result of a huge lava flow pouring into the ancient canyon of the Little Colorado River, filling the canyon and flowing both up and downstream for many miles. Obviously this had quite an impact on the river! It formed a dam and a lake upstream until finally the lake spilled over the top of the lava dam and began carving a new course for the river. Basalts and other lava rocks are very hard compared to the Kaibab limestone and Moenkopi siltstones of the original canyon, so the huge tongue of lava is preserved, by the river is currently working on carving a path around it in the softer rocks. The result is Grand Falls: 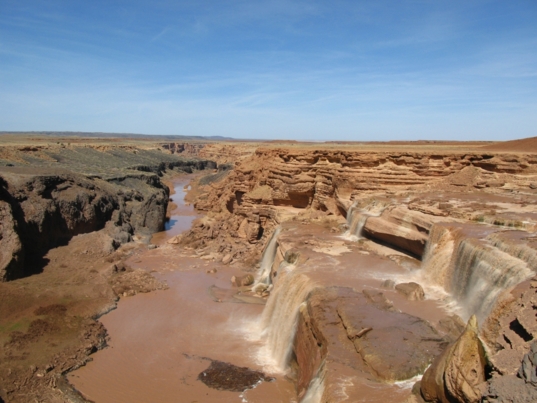 On the left you can see the dark, erosion resistant basalt that dammed the original canyon. On the right, Grand Falls are busy carving a new course for the river into the softer rock around the obstruction.

A mosaic of Grand Falls. Huge blocks of limestone sit at the bottom of the falls, showing that the falls are a powerful erosive force. (Click for full-resolution)

The other main point of interest at Grand Falls were the interesting patterns of cracks in the massive lava rock. These cracks, of "joints" tend to form perpendicular to surfaces in the flow that have the same temperature. In very simple flows, the joins often are vertical and the rock looks like it is made out of hexagonal columns. At Grand Falls, the joints are mostly very jumbled, which probably means that steam was percolating through the rock as it cooled. This might mean that there was water in the river when the canyon was filled with lava (the Little Colorado doesn't always have running water in it). 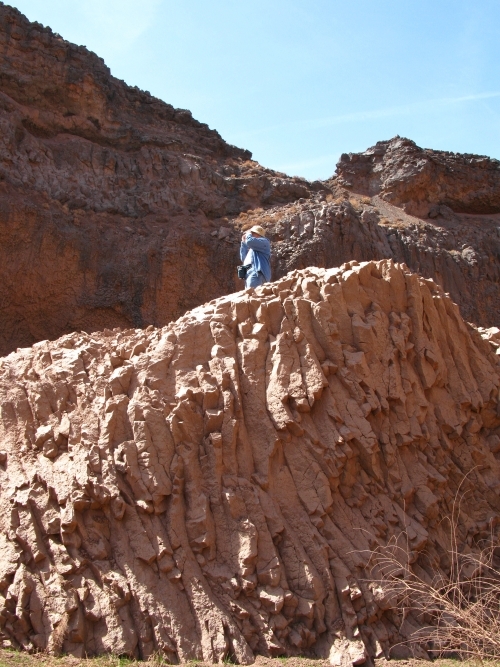 Columnar joints in the basalt flow at Grand Falls

This is one of the more ordered sets of joints; in many places there is no clear texture to the rock, suggesting complicated interactions with water as the lava cooled. Note that the normally-black basalt is stained tan-colored by the silt-bearing mist from the falls, yet more evidence that they are constantly eroding the rock that they flow over.

After Grand Falls, we drove our rental minivans through a shallow part of the river upstream, over some very rough roads, and arrived at a nearby dune field. This field is quite young: in the 1930s there were no dunes, but by the 1950s there were, and now no new dunes seem to be forming. The source of the sand is the bed of the Little Colorado, but there are also lots of dark volcanic cinders in the dunes. Larger gravel-sized particles get pushed around by small sand sized particles and form "granule ripples". These are extremely common on Mars; the Opportunity rover is currently in the middle of an expansive plain of similar ripples. 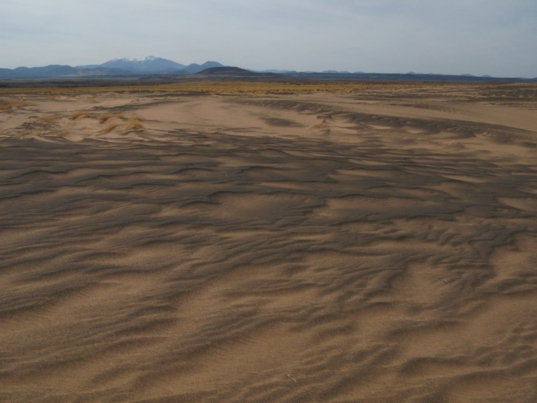 The larger, more dense basalt granules end up at the crest of the ripple, where finer-grained sand is blown away or settles below the granules. (In the background are the San Francisco Peaks and a few much smaller cinder cones.)

Larger piles of sand form dunes. Dunes move as the wind blows sand up their slope and deposits it at the top until it becomes too steep and avalanches down the "slip face". Here is an example of a boomerang-shaped "barchan dune" with a nice slip-face. This type of dune is very common on Mars. 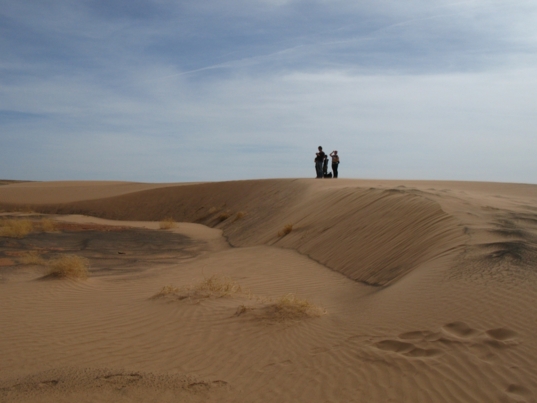 The points, or "horns" of the dune point in the direction that the wind is blowing. In this image, the wind that formed the dune was blowing roughly from right to left.

That's all for today. Tomorrow we will be visiting the painted desert, a location that may be similar to Mawrth Vallis on Mars, one of the potential MSL landing sites.