Today we made our way from Phoenix north to Flagstaff, and on the way stopped to check out some interesting geology in Sedona and Oak Creek Canyon. 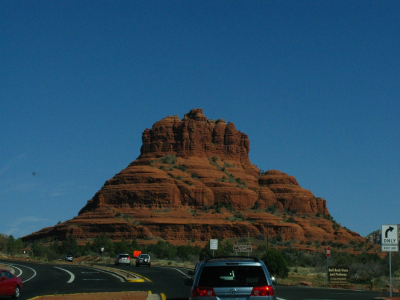 Bell Rock in Sedona, Arizona is an outcrop of red sandstone deposited 275 million years ago in a broad tidal zone.

Sedona is famous for its spectacular red rocks, such as Bell Rock, which we clambered around on today. Bell Rock is made mostly of very fine-grained sandstone formed by windblown sand reworked by the advance and retreat of oceans in the early Permian period (~275 million years ago).

A view of the layered buttes and mesas near Sedona

All of the open space between the outcrops was once solid rock, and thousands of feet more was once on top of that.

One of the things that is always impressive about the geology of Arizona (and most other locations on Earth, and other planets, for that matter) is that the surface that you’re looking at was once buried under miles of rock. This view out over Sedona from Bell Rock, shows the distant mesas and buttes with continuous colorful red and white layers of sandstone and limestone. The entire valley was once filled with rock, and there were thousands of feet above the very tops of the mesas that are present today!

In many sandstones, you see diagonal layers that form graceful curves and swooping shapes. These are called cross-beds and are the preserved cross sections of ancient dunes (or ripples). There was a light-colored layer that showed very clear cross-bedding across from Bell Rock. 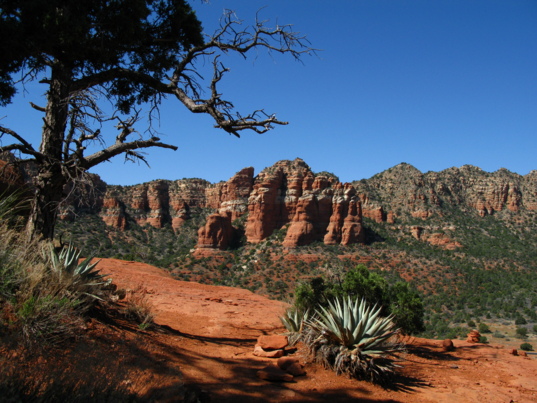 The light-toned layer shows clear cross-bedding, indicating that it is probably a sandstone formed by lithified sand dunes.

We saw some nice examples of cross-bedding on all different scales in the rocks of Oak Creek canyon. This picture shows a small oblong chunk of sandstone near the creek bed with cross-bedding on the scale of inches. This may have been due to small ripples rather than large dunes. 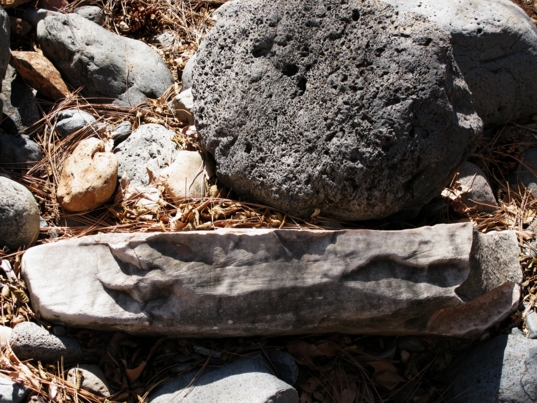 The rectangular block shows cross-bedding on a very small scale. It is about 5 inches across and a couple feet long.

Oak Creek canyon is also interesting because it follows a fault in the plateau, so the layers on one side of the canyon have dropped down several hundred feet compared to the other side!

Coming up tomorrow, we will be exploring the San Francisco volcanic field north of Flagstaff, focusing on the very young SP Mountain volcano and flow.