Today was all about volcanoes. We started early, driving north out of Flagstaff and skirting around the huge San Francisco peaks, which are the remnants of a huge stratovolcano (think Mt. Fuki or Mt. Rainier). The volcano formed between about 1 and 0.4 million years ago. It is currently 12,633 feet high, but in its pristine state it may have been several thousand feet higher. This is because it lost its peak, either by an explosive eruption or by erosion. You can imagine its profile by mentally extending the slopes in this photo up above the mountain to meet at a sharp summit. 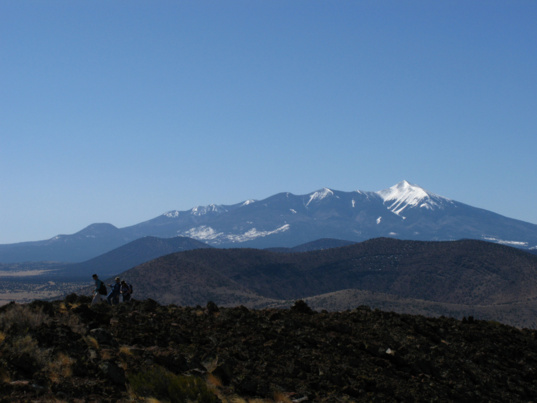 In the background are the San Francisco peaks, the remains of a huge stratovolcano that has lost its peak either due to an explosive eruption (like Mt. St. Helens) or erosion. Somewhat closer is an eroded cinder cone with a very broad crater. This photo was taken from the rim of SP Mountain, another cinder cone.

Our main destination today was SP Mountain, a pristine cinder cone volcano with a spectacular lava flow extending four miles from its base. Cinder cones are volcanoes formed by loose rocks called cinders. As they spew forth from the vent, the cinders form a pile that gradually grows to become a cone.

The class had been given various satellite and aerial imagery of the SP mountain and flow, and made geologic maps of the area. Today we actually got to go out in the field and test their hypotheses. This activity was modeled after the same one that I did in Hawaii last summer, and it’s a really great way to realize just how complex geology can be and how difficult it is to interpret things with just satellite imagery. It’s humbling to realize how wrong we are in interpreting things even on earth, just think how much we must be getting wrong about Mars! 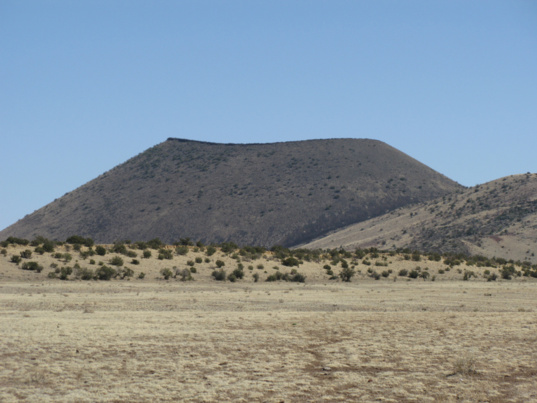 A view of SP mountain, a ~1000 foot tall cinder cone. You can see that the rim is capped with solid rock, but most of the cone is loose chunks of volcanic rock, ranging in size from small pebbles to huge boulders. It's quite an exhausting climb!

We made the exhausting climb up the SP cinder cone so that we could study it more closely, but also because it gives a great view of the lava flow and the surrounding terrain. Here’s a view of the flow from the rim:

Cinder cones form when lava erupts that is full of gases, which expand as they reach the lower pressure of the surface (much the same way that a bottle of soda will shoot out when opened too fast), causing the lava to fracture into chunks that are blasted into the air, cool, and pile up as rubble around the vent. Gradually this builds the cone, but it also uses up the gases in the lava chamber, so it is common for cinder cones to be followed by a flow of less bubbly lava that emerges from underneath the cone. There was some confusion today because some people thought they had read papers that said the SP flow formed before the cone, so I don’t know for sure what the exact series of events at SP were.

The term cinders refers to small chunks that have flown through the air and mostly cooled before they landed, but not all the chunks are small. Some, like the one in the picture below are much larger, and are called “bombs”. These often are spindle or football-shaped, because they form when a blob of lava is flung up from inside the crater, stretching it like silly putty until it breaks. 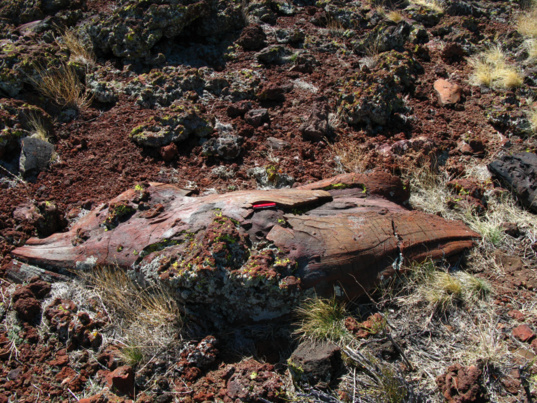 This large "bomb" is a lava rock that was launched from deep inside the SP crater, flew through the air and landed near the rim. It has an elongated shape because it stretched out as it was flung from the vent. Note my pocket knife for scale, and there are many bombs much bigger than this one!

SP is a pretty young volcano, but nobody is sure exactly how young. One method, which looks at the amout of argon formed as radioactive potassium in the rocks decays, indicates that it is something like 71,000 years old. But another method that relies on the luminescence of certain minerals under UV light, indicates that the cone may only be 4000 years old!

We explored all around the rim of the volcano, and walked through part of the lava flow, which is much more rugged up-close than it looks from above: 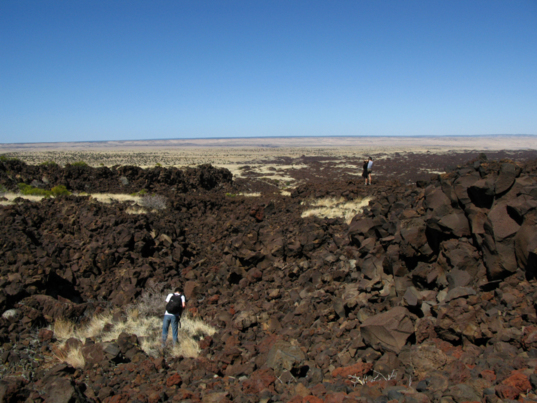 The lava flow up close

The lava flow is very rugged up-close! (note the geologists for scale) The lava in northern Arizona tends to have more silica in it than the very fluid hawaiian basalts, and more silica means that the lava in Arizona is more viscous. It forms much thicker, blockier flows than those seen in Hawaii.

After spending most of the day at SP, we did a brief stop at Sunset crater, the youngest volcano in Arizona. It erupted about 1000 years ago, when people were living in the area, and the remains of houses have been discovered in the lava flows. Most of the features of Sunset crater were similar to SP, although its lava looked a little bit more fluid than the SP lava. Sunset crater gets its name from the layer of red oxidized cinders near the top. 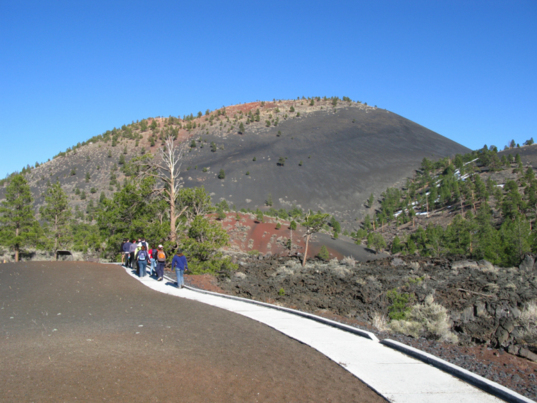 Sunset crater, the youngest volcano in Arizona, erupted about 1000 years ago.

That’s all for today. Stay tuned, because tomorrow is the Grand Canyon!