MASCOT landing on Ryugu a success

More than 325 million kilometers from Earth, a toaster-sized spacecraft sits defunct on the surface of a little asteroid, its job complete. For 17 hours on 3 October, the Mobile Asteroid Surface Scout (MASCOT) lander sent data to the waiting Hayabusa2 orbiter from multiple locations on Ryugu.

Hayabusa2 is far from Earth, so data and images arrived on the ground slowly. For the first two days, this was our only tantalizing view from MASCOT’s landing, one of 20 photos that the lander took and relayed to Hayabusa2 as it descended: 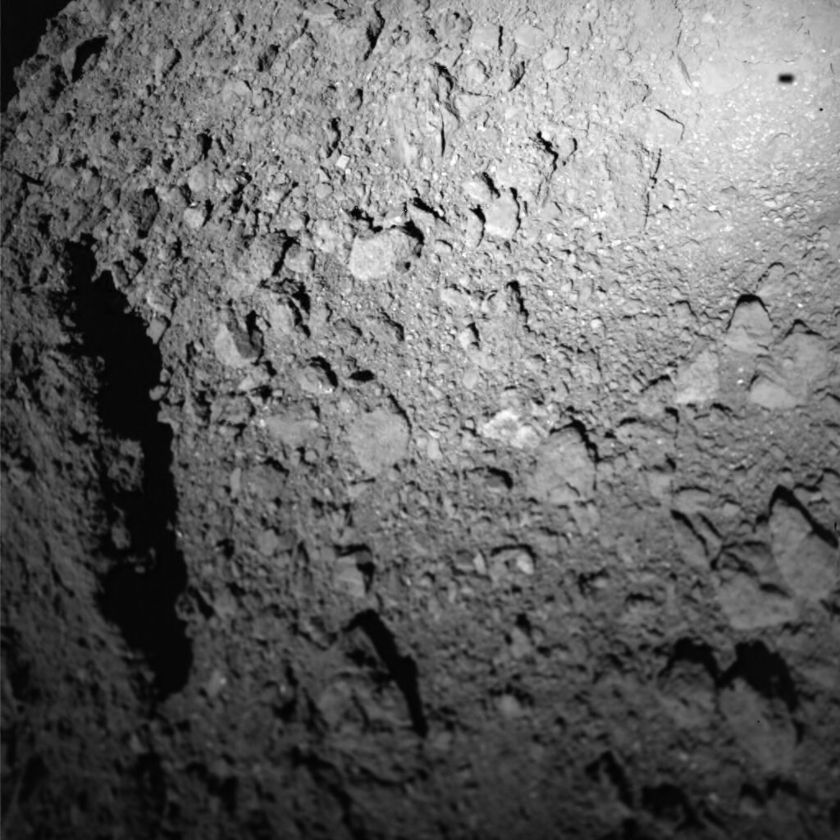 The MASCOT lander took this photo as it descended toward Ryugu on 3 October. Its shadow is visible in the upper right corner.

Today at the International Astronautical Congress in Bremen, JAXA and MASCOT’s science team released some of the other images chronicling the descent. They haven’t shown anything taken from the asteroid surface yet -- so stay tuned for that!

Three images taken by Hayabusa2's wide-angle navigation camera capture MASCOT falling toward Ryugu immediately after separation. The lander separated at 01:57:20 on 3 October, UTC; these images were taken 34, 44, and 54 seconds later. The images have been aligned and cropped to emphasize the motion of the lander. 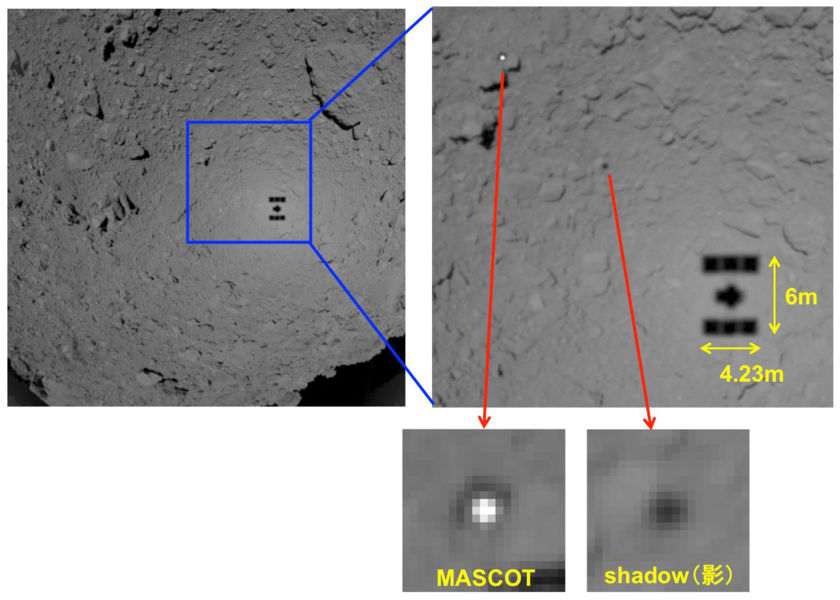 Hayabusa2 took this photo at 01:59:40 UTC, 140 seconds after lander separation. MASCOT was still 35 meters above the asteroid surface at this time. Hayabusa2's shadow is clearly visible, as are MASCOT and its shadow. The bright white circle at the center of MASCOT is its antenna. 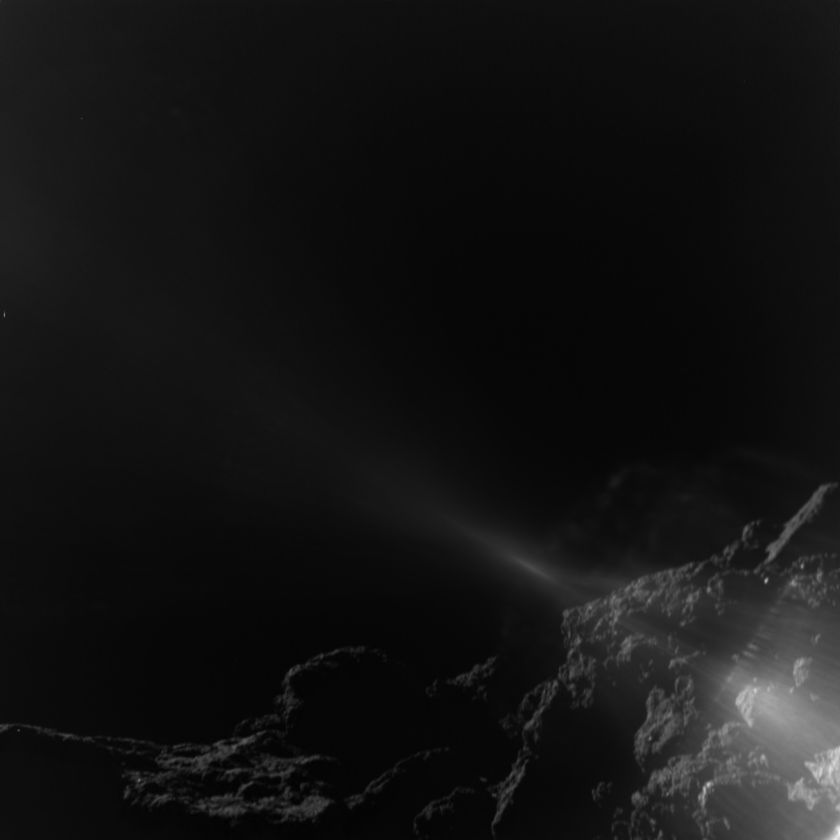 The tiny MASCOT lander descended to the surface of Ryugu on 3 October 2018. This photo was taken from MASCOT just before touchdown. The surface of the asteroid is very dark. 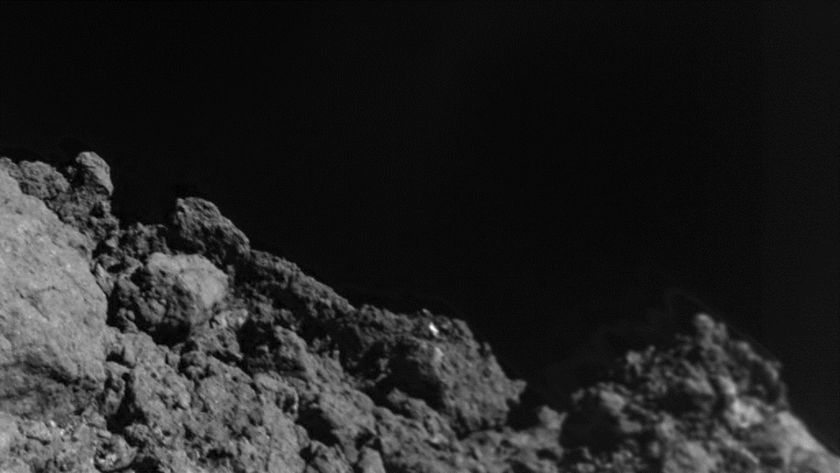 Hayabusa2 began its descent toward Ryugu to drop MASCOT on 2 October, sharing wide-angle navigation images in a real-time gallery here. When the spacecraft had descended to about 200 meters, the Earth controllers sent a command to the probe to proceed with the drop of the lander. (This command was transmitted at 01:20 UTC and received at 01:39 UTC.) From that moment forward, the Hayabusa2 descent and release and the MASCOT landing proceeded autonomously. MASCOT began preparing for its mission by powering on and warming up its instruments. Hayabusa2 descended to 51 meters.

MASCOT is 30 by 30 by 10 centimeters in size and weighs only 450 grams, having a carbon-fiber structure. Inside, a weighted flywheel allows it to “hop,” flinging itself above the surface. MASCOT carries 4 science instruments: 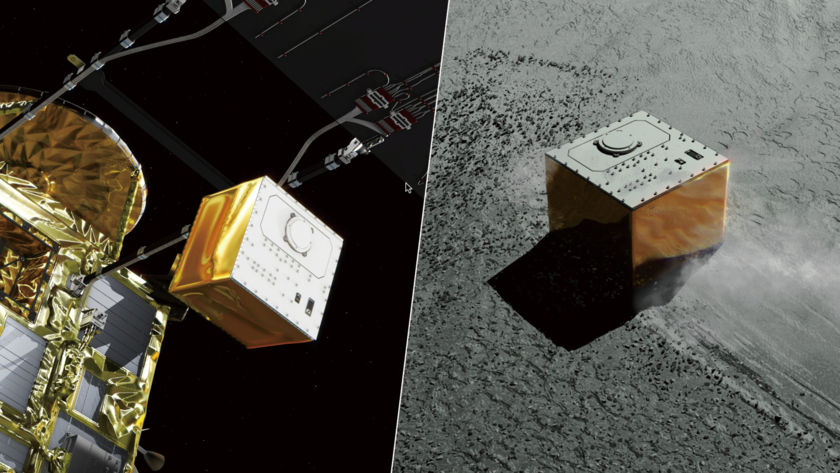 MASCOT has only batteries (with a capacity of 200 watt-hours), no independent power generation, so its life was limited from the moment of its spring-assisted release from the spacecraft at 01:57:20 on 3 October. A small antenna relays data to the Hayabusa2 orbiter. After releasing MASCOT, Hayabusa2 slowly ascended again, stopping and hovering at an altitude of less than 3 kilometers in order to receive data. The lander took 20 images as it descended, relaying them immediately to Hayabusa2 in case something bad happened upon landing. (Fortunately, this precaution was not necessary.) 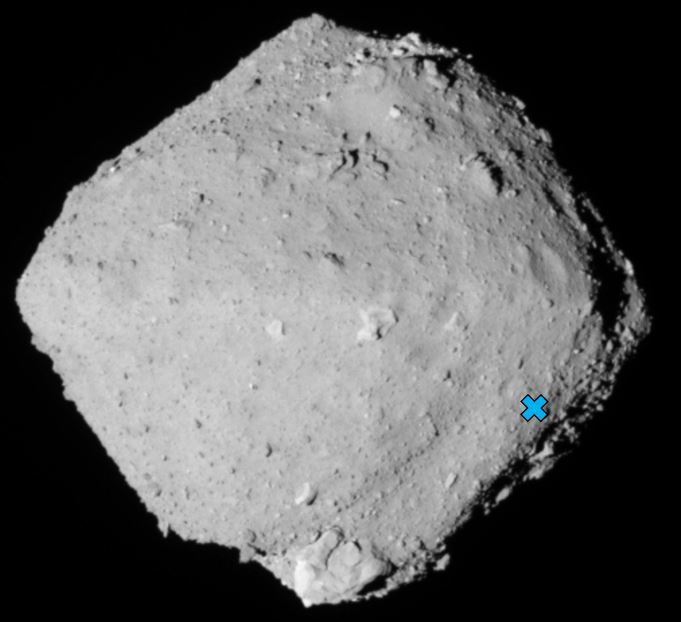 MASCOT’s operations were designed to be autonomous, since Ryugu was 18 light-minutes away from Earth at the time of landing. The landing happened 20 minutes after separation. MASCOT’s first landing, followed by an automated reorientation maneuver, left the probe in “an unfavorable orientation,” according to this press release. In a tweet, mission managers at the German aerospace agency in Cologne explained that the asteroid’s surface was so dark that the lander had difficulty determining its orientation. The team commanded a small motion of the flywheel to reorient the lander, and after that MASCOT performed a complete sequence of scientific observations over one asteroid day and night (Ryugu rotates once in 7.6 hours). A further “mini-move” of a few meters gave the lander a slightly different perspective on the terrain, and enabled MicrOmega to achieve better contact with the surface. The shift in photo perspective will allow the team to generate terrain models of the landing site. Until we see those, here’s a more distant terrain model derived from the images taken by Hayabusa2:

After the sun rose on the lander on its third asteroid day, the team commanded one further big hop in order to reach a second landing site. All data that it acquired at that new site was successfully transmitted to the orbiter before the asteroid’s rotation carried MASCOT out of view from Hayabusa2. MASCOT’s last signal was received by Hayabusa2 at 19:04, after 17 hours of operation, slightly overperforming the expected 16 hours. It will still be a few days before all the MASCOT data are transmitted from Hayabusa2 to Earth.

At 11:56 on 4 October, Hayabusa2 began its ascent to return to the home position altitude of 20 kilometers, though the activity was interrupted by another typhoon (Kong-rey) threatening Japan. (The mission does not conduct maneuvers when they cannot be sure of being able to operate out of Japan.) Hayabusa2’s next activity will be a second touchdown rehearsal, in preparation for the first spacecraft touchdown and sample grab at the end of October.

As a postscript, I’ve seen a fair amount of discussion of the white spots that are occasionally visible on the asteroid, like in this photo taken before MASCOT separation:

[MASCOT] The altitude of the probe is approximately 220m. This image was captured at 2018-10-03 at 10:12 JST (ground receiving time). #AsteroidLanding pic.twitter.com/4HRjGDu79f

Remember that Ryugu is very, very, very dark. Like “White Rock” on Mars, Ryugu’s white rock is likely not white. In fact, it may be quite dark-colored. If it’s just a couple percent brighter than Ryugu’s surface, it would appear bright in these photos.

This is an interesting little asteroid for sure! Thanks for the update. I hope you had an enjoyable time in NZ! ; )

Great blog post, thank you. Respectfully (and I may be misunderstanding something), but I think the MASCOT lander is 29.5cm x 27.5cm x 19.5cm and 9.6 kilograms, per the website of the German Aerospace Center, one of the organizations that helped to build it. https://www.dlr.de/dlr/en/desktopdefault.aspx/tabid-10977/1757_read-24573/#/gallery/31165

This whole adventure is almost unbearably awesome. As yet another. When Philae landed on Chury I shouted, 'apes just landed a spacecraft on a comet!' I'm not getting used to it. What Arthur C. Clarke said about any sufficiently advanced technology being indistinguishible from magic - I don't need the aliens for that. I understand (more or less) how these missions work from people like you. How Cassini was able to accomplish what she did. And they still feel like magic. Thanks, JAXA, for making me giddy. Enjoy Hobbiton, and say hello to my favourite current world leader.

skyweek.wordpress.com/2018/10/03/live-blog-zur-landung-von-mascot-auf-ryugu/ has interesting pictures, including some of the south pole boulder, which were shown at the IAC.