The Planetary Society has always enjoyed the connections between science and art, so when I saw Leila Qışın's sketches pop up on her Twitter feed during the recent New Horizons team meeting, I knew I had to share them with you. 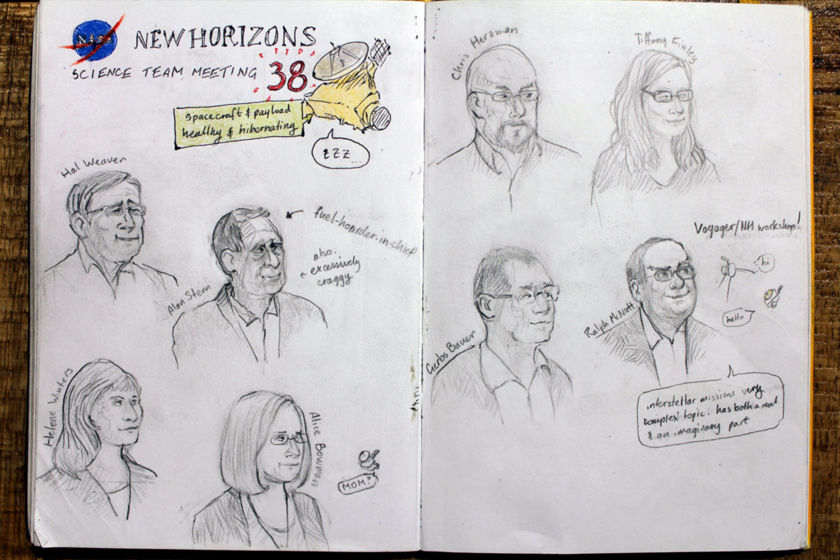 Leila is a European planetary science graduate student and an artist. (You can see some of her portfolio on this Tumblr.) She attended the January New Horizons science team meeting, and sketched many of the personalities involved. She says she prefers line drawing to painting because "I find it way more controllable and have trouble getting ideas across as precisely as I'd like with blobs of paint." 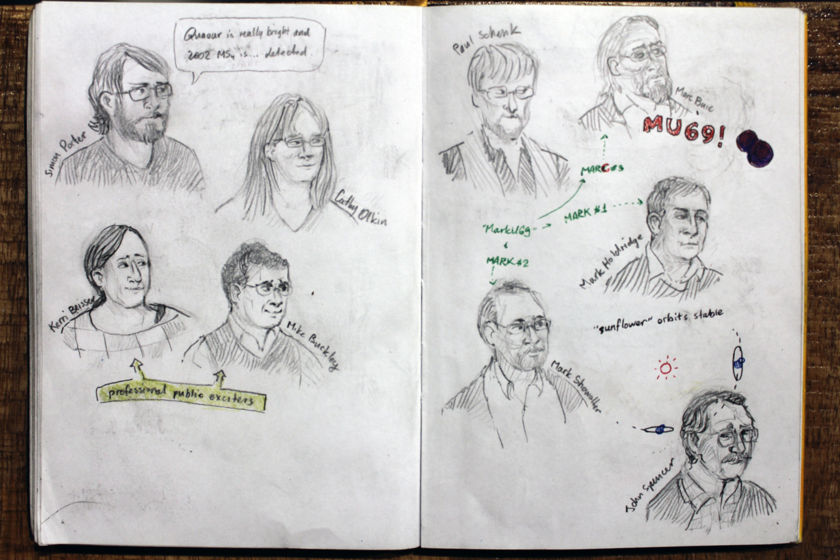 In terms of science, Leila says she's "mostly interested in planetary surfaces and how complex and weird they can get, whether it's entirely alien features or Earth-like ones combined in novel ways. Pluto is a great topic for all of this. Methodology-wise, I really like writing numerical models for tracking the formation and evolution of various geological structures." She did the most sketching at the day of the team meeting that was devoted to atmospheric science: 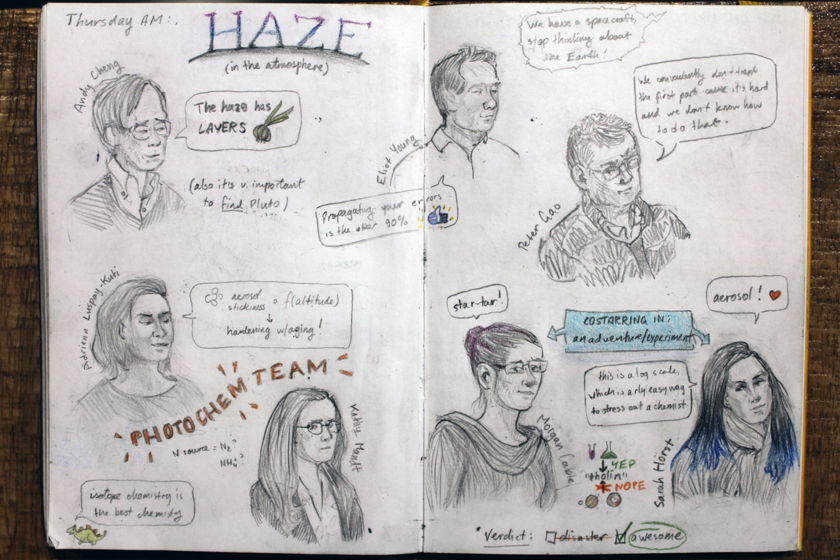 I particularly loved this drawing, featuring "Ceiling Khare." (Bishun Khare was an experimenter who developed tholins in the laboratory; Carl Sagan collaborated with him. Khare died in 2013.) 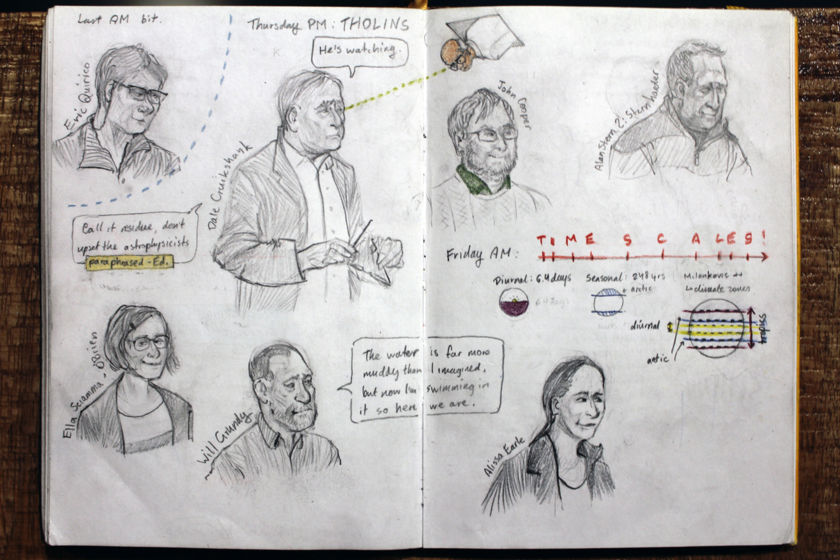 This one captures some of the playfulness of the team. "The New Horizons team is definitely a very vibrant collection of smart and funny people," Leila told me. "I haven't been around enough in academia yet to know where they go on those axes in comparison to the scientist average, but I do get the impression that scientists tend to be excitable nerds and that there's going to be something fun happening when you get enough of them together." 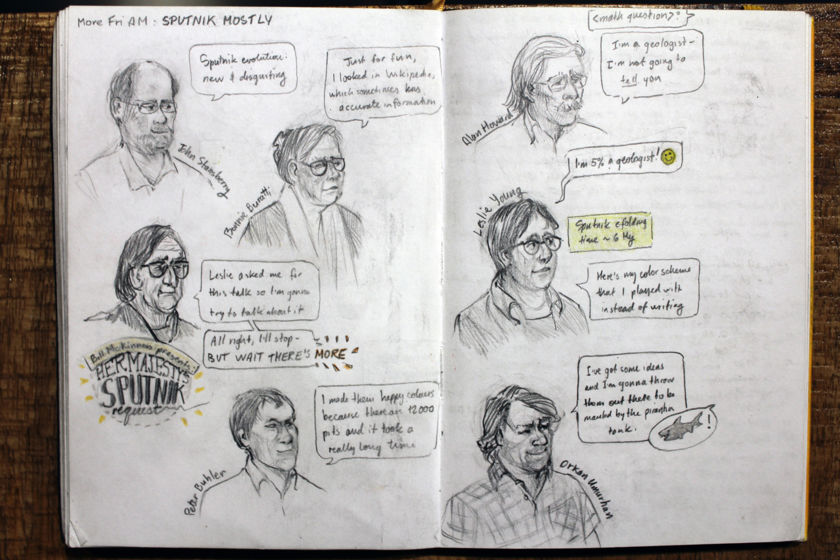 I asked her whether she thought her interests in art and science were connected, opposed, or complementary. She said: "Complementary is probably the best option of the three, when they're not orthogonal. I find they don't actually interact very often but when they do it's always in a positive way; for instance, my graphs probably look much nicer than if I'd had no artistic background, and the quirky sketch-journalism thing I've taken up at conferences seems to be entertaining people." Indeed! 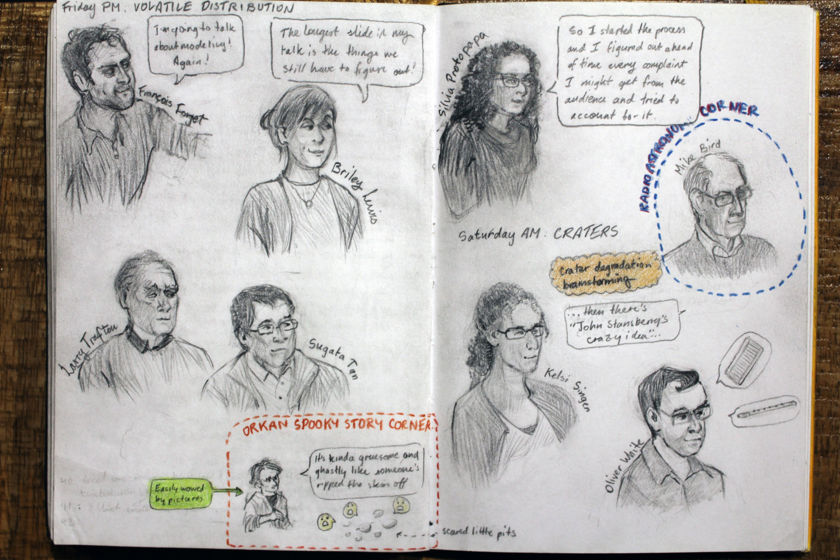 Thank you Emily for sharing Leilas' humorous work! Thank you Leila for doing this work and letting Emily share it. I enjoyed seeing it! 😁

Hi Emily, Clicking on Sketchbook Page 5 doesn't seem to be redirect me to a full resolution image- I get an error screen with the message "The specified key does not exist". Not sure if this might be a problem at my end, but I can't read the writing without it! Thank you so much.

@ceresiceweasel, thank you for pointing out the issue with the image. I've just corrected it so you can access Page 5 now. Thanks!