Now that I have a reasonable-resolution global color view of Pluto, I can drop it into one of my trademark scale image montages, to show you how it fits in with the rest of the similar-sized worlds in the solar system: the major moons and the biggest asteroids. 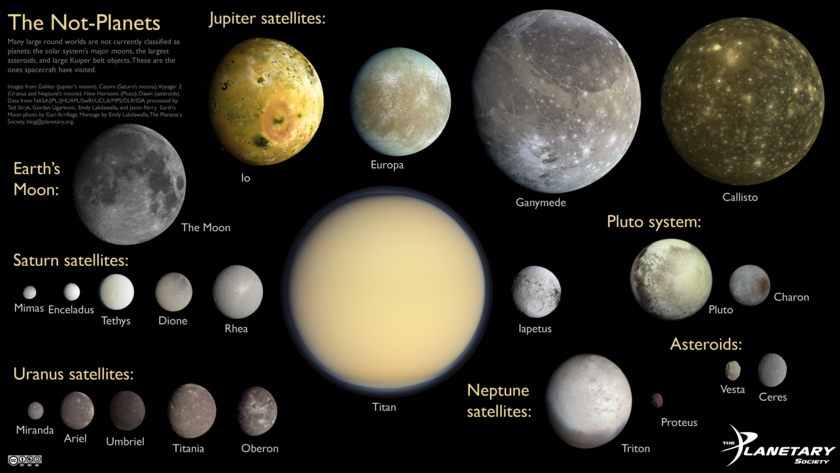 The solar system contains dozens of objects that are large enough for self-gravity to make them round, and yet are not considered planets. They include the major moons of the planets, one asteroid, and many worlds in the Kuiper belt. The ones that we have visited with spacecraft are shown here to scale with each other. A couple of items on here are not quite round, illustrating the transition to smaller, lumpier objects.

It's just an accident that Pluto wound up next to Iapetus and Triton, which I think are the two best analogs for what we can see on Pluto's surface. Yet Pluto stands out for its uniquely ruddy color. Charon, too, is unique, for its dark pole, but there are similarities to the similar-sized worlds on the left side of the diagram: Ariel and Dione in particular.

These are the not-planets. Their non-planetary status is a handicap because these are the worlds that we need to get Earthlings excited about exploring. Titan's strange hydrology -- Enceladus' geysers -- the subsurface oceans of Europa and Ganymede -- the dynamic surfaces of Triton and Pluto. And beyond all the worlds pictured here, there are hundreds of Kuiper belt objects that I would include on this montage if we had ever visited them up close. But we haven't yet. So much undiscovered country yet to explore -- but they're all worlds that much of the public is not familiar with.

I've exhorted you readers before on this topic, and I'll do it again: please go out and show your friends and family how cool these worlds are, and how much worth exploring. Help people learn their names, and help them understand how fascinating and mysterious they are.

great work. this needs to be a poster we can buy.

Yes! A poster! I'll buy it. Love me some Ganymede. Water. Not too much radiation like on Europa. Enough gravity to get work done but still easy to land/take off. Whaddya waaaant?!

Nice work! It's the albedo adjusted? Shouldn't Charon be darker?

If this isn't the coolest composite image ever, I can't imagine what might be. Thank you for this; it's great learning.

I also approve of TPS selling posters of your collages, Emily. I'd buy! One quick question - Why does Iapetus have a black line running through it? Was it assembled from images that did not quite cover the whole moon?

Let me add my support for selling the scale model not-planets poster! To quote a Doctor Who fan, "Shut up and take my money!"

This definitely shows how unique Pluto is, but also how it is literally between planet and non-planet status. All the same, I believe it an Eris should be granted planet titles so long as their size is considered the bare minimum for planethood.

And there are those who claim the Earth, unlike the obvious spherical shape of all other planets and moons, is flat. *Sigh*.

Wonderful! I wish there were just an arc or shoulder of the Earth, to give us an even better sense of scale.

What a great image! This should be on the wall in every classroom, next to the OBAF..., ehm no I mean the ABC poster. Next to the local world map of the continents. The Space Society really produces good stuff.

Absolutely beautiful Emily! I look forward to getting the poster at Christmas. I consider Pluto and Charon to be a long lasting Christmas gift in July! What a wonderful way to honor the achievement that Mariner IV was.

And the tiny! Lutetia with regards to Rosetta.

You know, I've been thinking about the old Hubble Space Telescope's resolution on Pluto (such as it was!). For all of Hubble's sophistication, Pluto looked like little more than a mottled blob. With that kind of "resolution" on the Earth (say, as an extraterrestrial observer), you wouldn't even be able to tell that there were continents and oceans to be explored; much less all the wonders that they feature! Well, like I said before: all I can do now is wait, and pray; we're all in this together...

@Dean Mars moons are too small. Phobos is only about 5% the diameter Prometeus which is the smallest moon in image. Imagine Phobos being a crater on Prometeus. Astronomical scales are not intuitive, one has too look up the data and trust unreasonable numbers.

I'd like to see a review of the ice-bodies most like Pluto (Europa, Triton, Enceladus, Titan?) I believe the world-maps of each will show comparable sharp details as well as rough outlines and we mihgt see similarities as well as distinctions.

Brian, Iapetus is one crazy-looking world: http://www.skyandtelescope.com/wp-content/uploads/Iapetus_two_sides.jpg Even back in the 60's, we could see that one side was much brighter than the other, which led Arthur C. Clarke to make it Discovery's destination in the novel of 2001: A Space Odyssey. Truth is indeed stranger than fiction!

Now I see what you're referring to, sorry. Does look a data dropout or something similar.

Hey, great to have the signal back! But we're not quite out of the woods yet, you know. The next step is to (hopefully) see those high-resolution close-ups: streaming back, across the orbits of Neptune, Uranus, Saturn, Jupiter, the asteroid belt, Mars, and back on Earth; it takes 4-1/2 hours for the signal (traveling at the speed of light) just to make the one-way trip! And even then (at best), it's going to take over a year to download all of it! We're all in the same boat; I guess we're just going to have to be patient, and wait. I truly think that it'll be worth it; we're going to be analyzing the data for at least a generation!

Although this isn't my idea, I feel strongly that the next two plutoid dwarf planets that are discovered should be named Mickey and Minnie. Since dwarf planets are classed differently from the major planets, do we need to carry on with the naming gravitas?

Why is Titan bigger than Ganymede if Ganymede is the biggest moon in the Solar System?

@Adrian747 The reason Titan LOOKS bigger than Ganymede is because of the Titanian cloud cover. Indeed, when the Cosmos TV Series was first aired (1980), Titan was said (as far as we knew) to be the largest moon in the Solar System. But this Series was filmed long before the Voyager 1 spacecraft encountered the Saturn system; even with the cloud cover, we found (through radio occultation) that Titan was only the SECOND-largest known moon (second only to Jupiter's Ganymede). Ganymede, yes, is 3,273 miles across; Titan, as it turns out, is only 3,200 miles wide (even though its cloud-cover makes it LOOK like 3,500 to 3,600 miles across!).

The poster is fantastic I am going to use it at the summer program I am teaching. I hope it will be available in full size. Thanks

Hi Emily, awesome montage. Would it be wrong to replace "The Moon" with Luna? Since all bodies shown here have mythological names, the Moon somewhat sticks out. I'm wondering if there's any consensus on the matter.

I find it interesting that you display only the largest asteroids-like Ceres (now a dwarf planet), dwarf planets and moons in the graphic of the poster for the Not-Planets. I have come to some conclusions about the IAU planet definition. First off the word planet by itself no longer has meaning. Only with an adjective or two does the word now have unambiguous meaning. For example Ice Giant Planet, etc. I think the IAU is not responding to the actual pace of discovery in the astronomy field. There should be a generalized nomenclature system for all orbiting bodies around ALL stars. In that spirit it has bugged me for a long time that many objects orbiting our Sol system planets are called "moons' despite the fact that it would be more accurate to call them captured asteroids in those cases where they are not big enough to be ellipsoidal/spherical under their own mass/gravity. My scheme would demote Phobos and Deimos and a large number "moons" around the gas giants, leading to possible popular rebellion similar to what happened when Pluto went from planet to dwarf planet. But I still feel it is a change in naming of object amendment which will become more and more needed as we discover more and more exo-planets and soon enough the objects which orbit them with larger scopes now in design stage or about to be built.

I also happen to agree with the Luna name idea for out moon and would add that we need to formally use Sol instead of Sun/Home Star etc.

Thanks for the reply rickray777. The poster claims to measure scale images of the non-planets, including their atmospheres in this measurement is just rubbish science. As you point out, the two objects are pretty much the same size with Ganymede only slightly bigger, yet in the poster Titan in much larger. It’s sad that teachers like Craig Clark will be using incorrect images like this to teach students - if students study this poster and have an exam question like “What is the largest moon in the Solar System?” it would not be too surprising if many said Titan. I think the that The Planetry Society should have higher standards than to produce incorrect misleading tat like this. It looks great - but it’s wrong.

So Adrian 747 you would prefer a "naked" Titan with its atmosphere stripped off appearing instead like the Venus Magellan globes. Come to think of it I would like that version as well. Good thinking!

Well by similar logic, if you assembled a poster of the 'real planets', you strip away the atmospheres. I'm not sure how much would be left of the likes of Jupiter, Saturn, Neptune & Uranus.... Dean

Upvoting the requests to put this poster in the shop. I'll buy a couple!

this is great but there's an inaccuracy, Ceres is a Dwarf Planet, not an asteroid. It was reclassified when Pluto was too.

I would pay for a set of spheres painted with these worlds, actually. With the four inner planets, they comprise the worlds of our Solar System that we've photographed. It's a manageable number of worlds to learn - and it, not the list of eight or nine "planets", is the list children should learn. These are the worlds, the spheres, that we could walk on and land things on, explore, look up from, drive our rovers across, fly aircraft and submarines on some of them, maybe find life on some of them. They have geology and history and weather. You can (and should!) have maps of them, know where they are and how we can get there.

Phobos & Deimos might be too small (as are the other asteroids/minor polanets that have been visited), but what about Hyperion & Phoebe?

I bought a game called Solar Quest years ago. It is a Monopoly sort of thing, but based on traveling around the Solar System. My daughters, now in their 30s, were 8-10 when I got the game. They still know the names of all the moons that were known then: Amalthea, Neried, etc.