The 2014 Lunar and Planetary Science Conference wrapped up a week ago. When I did my rundown of LPSC science nuggets last week, I left aside one more topic that I thought needed special attention: Titan's land of lakes. There was an entire oral session devoted to the only other world in the solar system beyond Earth that we know of that enjoys anything like Earth's hydrologic cycle. And unlike just about any other LPSC session I attended, much of the work presented was new to me. All of the talks I saw were different from the Titan talks I attended at the Division for Planetary Sciences meeting only five months ago. A good sign that we're only beginning to get science results from Cassini at Titan, and all of the experimental work that Cassini's discoveries have stimulated.

Before I go into the details of talks, I have to share with you my discovery that the latest Cassini RADAR map of Titan's northern lake district is about 25,000 pixels on a side. It would cover the wall of a small room. Through ten years of operations at Saturn, two mission extensions, and more than 100 flybys of Titan, they have nearly completely covered Titan's northern polar region with crisp, gorgeous RADAR images. 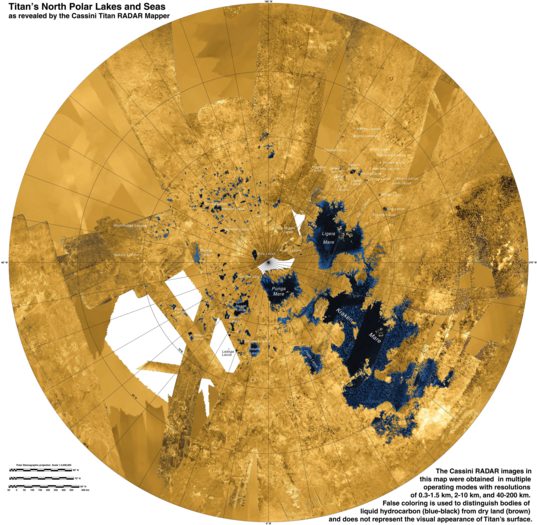 Most of the links in this post go to PDF-formatted abstracts of the research. One comment about the language in this post: a lot of Titan scientists use words from Earth hydrology, like "hydrology" and "groundwater" and "rain" to describe things on Titan that are definitely not made of H2O. Some scientists use words like "methanological" instead of "hydrological", but it's not always correct to just substitute "methane" for "water" in these words, because what fills the lakes is actually a mixture of methane, ethane, and other stuff. So if I'm talking about Titan and I say "hydrology," what I mean is the way that liquids (or substances that are often but not always liquid on Titan) move around the Titan system. It's a bit confusing, but it's part of the fun of having a completely new and unfamiliar environment to explore on another world.

I missed the first few talks of the session (to learn about the latest results from the Moon). In particular, I missed Jason Barnes' talk about how he has finally observed waves on Titan's lakes. We won't ever be surfing these waves -- they only have slopes of 6 degrees and are probably no more than a centimeter or two in height. Alex Witze has a nice writeup of his talk here.

When you have lakes, there are two main ways they can be supplied with liquid: from above, with rain and runoff, or from below, through groundwater recharge. David Horvath tried to figure out which way Titan's lakes get resupplied. It needn't be either-or, of course; both are involved. By modeling Titan-like terrain, he found that liquid is just not stable at the surface over a Titan year for the lowest-latitude of Titan's lakes; methane evaporates from them, and you get a local drawdown in the water table, inducing groundwater flow from the pole toward the more southern lake areas. To match the observed distribution of lakes with his model, Horvath needed to make the ground pretty permeable, allowing fluid to flow readily through the ground so that rainfall on the more-northern lakes could recharge the southern, more arid, basins.

Horvath's work doesn't say anything about why all of Titan's big lakes are found within one large clump, not centered on the pole. Other work suggests that clump is caused by tectonics or something making a regional area of low elevation.

Roger Michaelides looked closely at the RADAR properties of Titan's empty lake basins and found them to be radar-bright, distinct from the materials outside the basins, suggesting that they are filled with evaporite deposits. On Earth, if you evaporate a lake that has stuff dissolved in it, you get salt deposits. On Titan, the evaporites will be made of hydrocarbon gunk. Probably the most interesting statement from Michaelides' talk was the fact that the absolute elevation of lake surfaces in Titan's northern polar regions is "constrained to a small range in elevations coincident with the shoreline of Ligeia Mare." That's consistent with what Horvath implied: that there's a lot of subsurface flow of fluid, so that the lakes can "communicate" with each other, and lake levels are roughly constant from one lake to another. Michaelides continued by saying that if the depth of a lake basin is above the surface of Ligeia Mare, you get a "paleolake" (that is, a thing that looks like a lake that doesn't presently contain fluid); if the basin's floor is below the level of Ligeia Mare, you get a lake; and that if a basin's floor has intermediate depth, you get a dry basin "with a little lake right in the middle." One radar property of the dry lakebed deposits, its dielectric constant, is consistent with them being deposits of solid hydrocarbons, but that's a weaker result. Still, it's what you'd expect for Titan, if these closed basins with bright floors are places that used to contain lakes but don't anymore.

Then there were a couple of cool talks on experimental work being done on simulated Titan materials. Vacuum chambers at pressure higher than Earth, cooled by liquid nitrogen, containing highly flammable and/or toxic substances -- this is tricky work to do safely. But the experimental setups sure look cool: 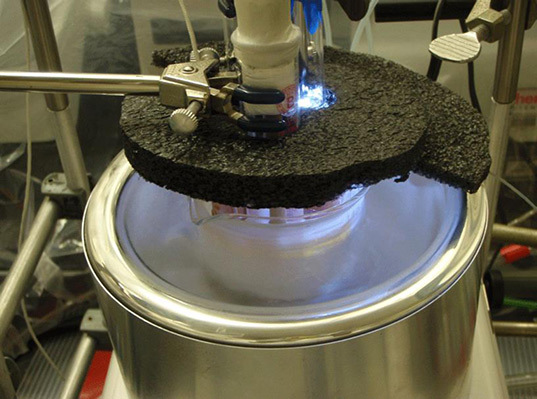 The blue glow is from internal LED illumination.

The first presentation was given by someone whose name I wrote down as Mahanti but the first author of the abstract is Sandeep Singh, so there's some problem with my notes here. They were exploring how acetylene behaves under Titan conditions of pressure and temperature, in Titan's methane-ethane lakes. Acetylene is liquid only under an extremely small range of temperatures; it prefers to be solid. First of all, they found that acetylene produces wiggles in spectral data that should technically be detectable using Cassini's VIMS instrument, but these wiggles have not been detected. Second, they found that, under Titan conditions, acetylene (C2H2) is not particularly soluble in methane (CH4), but is much more so in ethane (C2H6). There isn't an ethane cycle on Titan; once Titan's atmosphere and solar radiation make ethane out of Titan's atmospheric methane, the ethane falls to the ground and stays there. It's only methane that evaporates and rains and cycles around. With the lower solubility of acetylene in methane, you get a weird, counterintuitive effect where if you have a lake on Titan that is saturated with acetylene, and it rains (methane), then the lake's response to getting more full is that it solid acetylene will precipitate out of it.

The last talk I saw in the session was Mike Malaska's, on some of the bigger organic compounds that could be present in large quantities on Titan's surface. These include benzene (a carbon hexagon), which has already been detected in Titan's atmosphere and on its surface, and bigger molecules like polyaromatic hydrocarbons (PAHs) and polyphenyls, which are different kinds of connected carbon rings. Enough benzene has likely been produced in Titan's atmosphere to cover the whole moon to a depth of 50 centimeters over a billion years. This material rains down from the sky, where it gets subjected to Titan's hydrological cycle. What happens next depends on how the stuff behaves in Titan's fluids. Most of it, Malaska has found through experiment, will dissolve in Titan's methane-ethane fluids, though slowly. Now, on Earth, we have a similar situation: we have rocks that are composed of materials that will dissolve in Earth's rainwater, things like limestone. When you subject limestone to rainwater and groundwater for geologic time, you dissolve caves and make sinkholes and other fun features that combine to make a kind of terrain known as karst. Malaska found that the dissolution rates for aromatic hydrocarbons under Titan conditions are actually quite a lot like the dissolution rates for limestone and gypsum on Earth. Yet another way in which Titan is a bizarro Earth.

I think these four talks are an interesting illustration of the ways in which observation, mathematical modeling, and experiment have to converse with each other when it comes to understanding a completely new place like Titan. The observations are imperfect; Titan hides its surface under a haze, and even the beautiful radar images are pretty low-resolution by comparison to what we have for Earth, the Moon, and Mars. Experiments can only work with very tiny amounts of material, on time scales that are very short compared to the natural world's geologic time. Models can give you those longer time scales, but are always only crude approximations to reality. Meetings like LPSC are places where observers, modelers, and experimentalists can come together to compare notes and figure out whether or not they're on the right track in trying to explain what it is that we would see if we could visit these alien worlds. 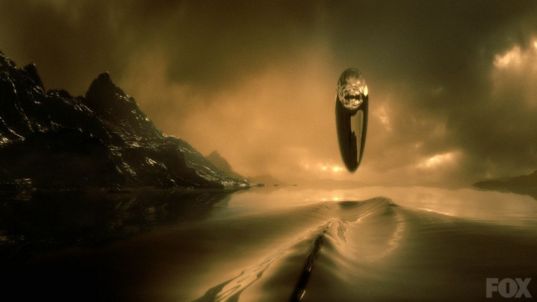 Cosmos: The Ship of the Imagination disturbs a Titan lake

From the episode "Some of the Things That Molecules Do"

This will be my last post about the 2014 LPSC, but I have several more posts from scientists who submitted guest posts about work presented at LPSC -- stay tuned for those!

I get the impression from the map that the radar coverage of Titan's north pole is still spotty enough that we could be missing many more lakes -- even quite large ones. Is that correct?

No, not really. Only the white spots on the map are truly empty. Large lakes would be visible even in the lower-resolution sections of the map. And now that spring has passed at the north pole, visible images are showing us the extent of the lake region, albeit at lower resolution than radar can achieve. The two data sets match pretty well.