I attended a few talks at the Division for Planetary Sciences meeting today that concerned Titan's origin and interesting surface, and then one in the afternoon about the atmosphere.

Doug Hamilton began by posing the question of why Titan is so lonely in the Saturn system. Jupiter and Uranus satellite systems are very similar to each other, he said; each of them has four similar-size bodies packed fairly close to each other in circular orbits. Saturn's departs from these: it has one behemoth of a moon, Titan, with a relatively large gap between it and the next-biggest moons Rhea and especially very distant Iapetus. On top of that, Titan's orbit is not quite circular, with an eccentricity of 0.03. Assuming that Jupiter and Uranus are normal and Saturn is not, Hamilton proposed that Titan actually formed from the collision merger of two to four smaller moons. That would explain the large size of Titan and the apparent gaps in the satellite system; it could also explain the eccentricity. If that were true, then low-density weirdo of a moon Hyperion could be a fragment from one such collision. It's not clear to me if the idea generates any testable hypotheses though.

Shannon MacKenzie talked about a material on Titan's surface that appears relatively bright at the longest, 5-micron near-infrared wavelength visible to the VIMS instrument. Because this material occurs around the edges of Titan's lakes and also in the bottoms of Titan's lakebeds, this material is interpreted to be an "evaporite" -- solid deposits of stuff that was once dissolved in Titan lakes. She has mapped the stuff globally, finding it covers 1% of the surface. Most of this "evaporite" material is found in Titan's northern polar region; very little of it is visible in the south. But there's actually an extensive deposit of the stuff near Titan's equator, in the Tui and Hotei regions. She estimated the volume of liquid filling the polar lakes and the amount that would have to evaporate to make the Tui/Hotei deposits and found them to be pretty similar. So she wondered: did the liquid at the poles once reside instead in those equatorial spots? 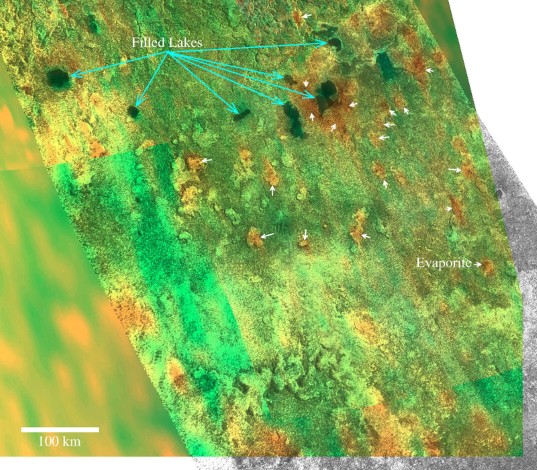 Cassini VIMS/RADAR hybrid image of filled and dry lakes south of Titan's methane sea Ligeia Mare. The brightness of the image is determined by synthetic aperture radar which indicates roughness, and the colors by Cassini's Visual and Infrared Mapping Spectrometer indicate composition. Some of the small lakes in the image are filled (cyan arrows). Other lakes show lacustrine morphology, but no evidence for liquids. Some of those dry lakes have the same composition as the surrounding terrain, but others show evaporites in bright orange.

Rosaly Lopes talked about Titan's "blandlands" -- regions that are very boring in radar images, somewhat dark and homogeneous. The blandlands cover more than half of the surface. She came up with four hypotheses for what they might be: cryovolcanic lavas; dune materials where the dunes were too small to be discerned in radar images; fine dust deposits; or the breakdown of terrain into poorly sorted gravel material. She showed a couple of occurrences of the stuff and then suggested that the last idea was the best match to observations; much of Titan's surface may look like the Huygens landing site of mixed-sized sediment, only she said the pebbles would be smaller. Rosaly is a volcanologist and has written a lot about cryovolcanoes on Titan so she joked about how the audience must be shocked that she didn't think cryolava flows were a good match.

I thought Catherine Neish's presentation was pretty awesome. By taking a brand-new map of Titan's global topography and comparing it to a map of Titan's craters, she showed that craters on Titan preferentially lie near the equator (which was already known) and that they also preferentially lie at high elevations (which wasn't). She came up with five possible explanations for the difference. For four of them, the craters formed everywhere but were preferentially filled at lower elevations -- but none of these seemed to work fast enough or completely enough to make craters almost completely absent at low elevations. The idea that she favored made an analogy to Earth. On Earth, impact features occur at all elevations but are almost impossible to detect in marine environments, at least from orbit. That's because when a crater forms in a wetland or in water, poorly consolidated, water-saturated sediment slumps and almost completely fills the transient crater. She suggested that these low-elevation areas on Titan may be saturated with liquid, and as such, craters are there but too hard to spot. 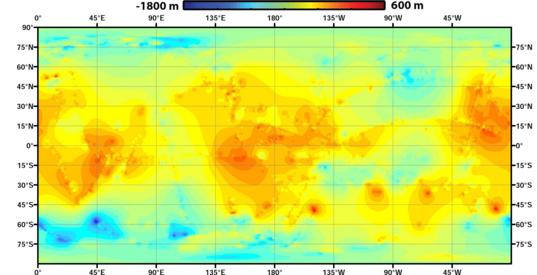 Data collected between 2005 and 2011 was used to produce this global map of Titan's topography. Titan's high latitudes are lower in elevation than its equatorial regions by an average of a few hundred meters.

Later in the day, Caitlin Griffith gave a plenary talk on the current state of understanding of Titan's global atmospheric circulation patterns. Through much of it she compared and contrasted Earth and Titan. The two atmospheres have some striking similarities: both are predominantly nitrogen, both have similar pressure, both are saturated with a minor constituent. On Earth, of course, it's water that provides humidity, while on Titan, it's methane.

One striking difference between Earth and Titan's atmospheres concerns their temperatures. Earth's atmosphere ranges hugely in temperature from -89C to 58C (-129F to 138F). On Titan, the atmospheric temperature is constant everywhere, day or night, winter or summer, over most of the globe. Even at the poles, it's only a couple of degrees cooler than at the equator, and only 1.5K cooler in winter than in summer.

Unlike Earth, Titan usually has a very simple global pattern of atmospheric circulation. Air rises at the summer pole, moves to the other pole, and sinks at the winter pole. Where humid air rises, methane clouds can condense and even rain; you get tall convective clouds, just like rainclouds on Earth. Where the air sinks, ethane that's produced in the upper atmosphere condenses to form clouds with tiny particles. Near the equinox, Titan's atmospheric circulation had to swap poles. For about a year, around 2010, air rose at the equator, and indeed Cassini saw convective methane clouds and rain near Titan's equator around equinox.

At the end of her presentation, Caitlin posed a problem for the audience to consider. Titan's atmosphere, she said, is stuffed with methane; you couldn't put any more methane in it. And yet only a very small area of Titan's surface is covered with methane lakes. Are we seeing the end of a process that began with very large bodies of methane on the surface, all of which has evaporated into the atmosphere now? Or is it connected to subsurface reservoirs that we're not even considering? For myself, I wonder if Cathy Neish's "wetlands" could be such reservoirs that people haven't thought about yet.

Cool stuff. So much more to write about yet...

Excellent article Emily. The sooner we get there and get on the surface, the sooner we can answer some of those great questions. I've already checked out some nice beach-front property from the Cassini-Huygens photos.

I'm trying to understand that topography map. Hmm, high elevation at the equator, highest near Saturn-nearpoint and Saturn-farpoint. Are the elevations compensated for rotation and saturn-tide? Does Titans surface feel close to level? What happens to a wind-shielded plumb-bob over the course of a month as a function of degrees from nearpoint or farpoint?

This map is not corrected for the geoid (Titan's nonspherical gravity field) - that amounts to only ~100m. The daily shifts in local vertical are only about a thousandth of a degree (which is essentially your question) - in effect Titan's biggest seas (Kraken and Ligeia) act as spirit levels, and so over their several hundred km extent, that corresponds to tides of a meter or so. So indeed tidal accelerations/tilts are bigger than earth, and could be measured by future missions, but are far too small to 'feel'.

I heard an interview with a researcher in Australia who studies solar system evolution. Among other things, he suggests that Titan is captured. No idea how he views Titan's mostly circular orbit. I'm not sure if i buy all his arguments. But it's fun to consider. I'm no expert here.

Ralph Lorenz, Thanks for clearing up my 5 am musings. But, just LOOK at the thing. Back in May, were you showing off those polar maps instead of this one to avoid this kind of misunderstanding?

Great article! You mention that Titan's atmospheric temperature is very constant... but what is the temperature?

Not sure I understand the question. Polar maps, cylindrical maps, the paper, and ASCII data files were all made available in May. They are at my website http://www.lpl.arizona.edu/~rlorenz/

Ralph Lorenz, I'm talking about the PR google-bomb that NASA launched in May that made it very difficult to find any Titan maps at all besides the polar topograhic maps featured in a seemingly endless series of nearly identically worded articles. I'm grateful for the link.