We're about halfway through the 2014 Lunar and Planetary Science Conference and its relentless scientific sessions about geology on every solid-surfaced thing in the solar system, from planets to moons to meteorites. So far I think the most exciting work I've seen presented at this meeting is Simon Kattenhorn and Louise Prockter's work on solving a longstanding puzzle on Europa. Yesterday, Kattenhorn demonstrated that Europa may be only the second world we know of -- besides Earth -- where there is active plate tectonics. This is quite new work; it was presented for the first time at the American Geophysical Union meeting in December, and there's no peer-reviewed publication yet.

We know that Europa has a very youthful surface. There are only 41 named craters. Depending on how frequently you think the outer planet moons get hit by wandering comets, that means that globally, the surface is between 40 and 90 million years old, and there are no heavily cratered regions. So either Europa had some major event 40 to 90 million years ago that wiped out its whole surface and started it fresh, or Europa is experiencing global active geology that, on average, refreshes any spot on its surface once every 40 to 90 million years.

There is, of course, other evidence for activity on Europa in the form of criscrossing bands and grooves and other linear features that show that its ice shell is experiencing active geology. It can all be pretty confusing, and there's still debate on how some of Europa's most distinctive features formed, like its double ridges. But there is a kind of terrain that presented a puzzle that was easier to solve.

Europa has wide lanes of thinly grooved material that are called "bands." This picture contains one named Phaidra Linea: 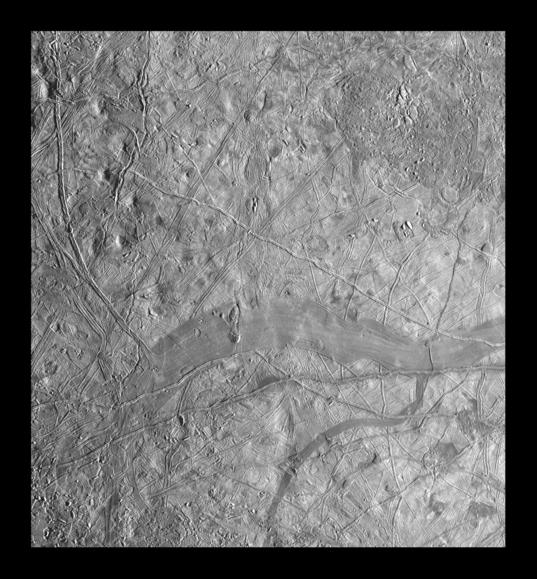 Chaos terrain on Europa, in the upper right of this image, is a place where the bright, icy crust has been broken and deformed. It represents some of the most recent geologic activity on Europa. In the southern part of the image is a smooth, gray band provisionally named Phaidra Linea, where the crust has pulled apart, separating preexisting geologic features, much like a mid-ocean ridge on Earth. The image covers an area roughly 350 kilometers square near Europa's equator.

You can demonstrate that many of these bands are places where the Europan crust has fractured and spread apart, with new crust being generated inside the band. Just take a pair of scissors to a Galileo image and you can reunite geologic features on opposite sides of the band.

Phaidra Linea and other, similar bands on Europa can be reconstructed to reunite geologic features, demonstrating that these kinds of bands are "pull-apart" boundaries, where the surface has fractured, opened up, and new crust formed.

These bands are interpreted to be places where there has been spreading and the generation of new crust on Europa. It's strikingly similar to mid-ocean ridges on Earth, where plates are spreading apart and new crust is being generated at the spreading ridges. Making new crust is exactly what we expect Europa to be doing if it has a youthful surface. There's a problem, though: Europa has to be removing, or at the very least, shortening, old crust to make way for this new crust being generated at spreading centers. But evidence for places where Europa removes crust has been really, really hard to find.

Earth accomplishes shortening or removal of old crust in two ways. Earth shortens its crust by folding it, which builds mountains, and also deforms the crust so much that it obliterates older geologic features. But that only accounts for a little of Earth's crustal removal. The main way Earth gets rid of old crust is by recycling it into the interior, at subduction zones. Cold, dense ocean crust dives downward and eventually gets incorporated into Earth's mantle. It's the familiar conveyor belt of plate tectonics: crust comes up at ridges and goes down at troughs and there's a circular flow in the mantle that brings material back up at the mid-ocean ridges. It operates quite quickly, geologically speaking; there's no ocean crust on Earth that's older than 270 million years old, and most of it is quite a bit younger.

Geologists have found some evidence for folds on Europa: 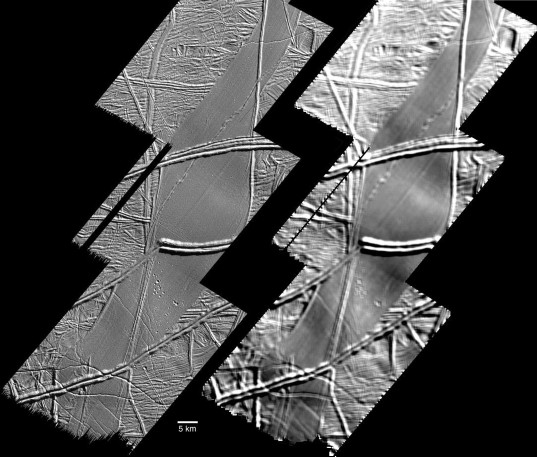 Astypalaea Linea on Jovian ice moon Europa is the broad smooth region running through these images recorded by the Galileo spacecraft in 1998. The pictures are different computer processed versions of the same mosaic -- on the left, small scale details have been enhanced while on the right, large scale features are emphasized.

But these folds can't shorten the Europan crust by very much, not nearly enough to accommodate all the expansion at the bands. Which leads to the work that Kattenhorn presented yesterday. He and Prockter have identified a feature on Europa that they call "tabular bands." Performing the same kind of puzzle-piecing reconstruction work that demonstrates the spreading at Phaidra Linea, they showed that tabular bands are places where crust has disappeared at Europa.

I wish I had a good image to show you, but if these tabular bands and missing crust were obvious, they would've been noticed back in the late '90s when the spreading zones were discovered. Here is the figure from their abstract. It's common for the images from LPSC abstracts to be less than convincing, because the scientists are reserving the good stuff for when they are ready to submit their work to a peer-reviewed journal. This graphic shows you where the bands are, but doesn't really present the case for why you might think they are subduction zones. 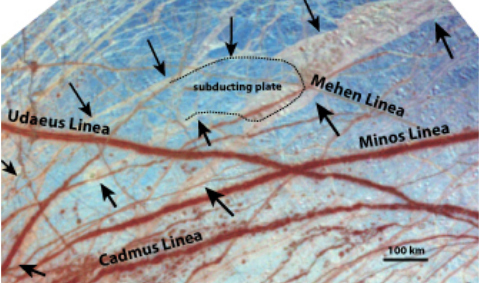 Candidate subduction zones (light colored regions identified by arrows) in the northern trailing hemisphere of Europa. The study region shows evidence of a subducting plate with discrete boundaries, one of which shows evidence of the removal of 92 km of the surface along a NE-SW-oriented band at its southern margin.

With better images in his presentation, Kattenhorn outlined a list of seven lines of evidence that these tabular bands were subduction zones:

He concluded by saying that these features could have progressively removed all old cratered terrains, leaving Europa with only youthful crust. He mentioned that by recycling crust into the interior, you bring stuff from the surface into the interior. Europa's surface likely bears a lot of weird chemistry because its materials get attacked by all the charged particles in Jupiter's nasty radiation environment. So bringing crust down into the interior means you can potentially deliver surface materials, with all their interesting chemistry, to Europa's internal ocean. Which makes astrobiologists hoping to discover life on Europa happy.

His talk was followed by some good questions. Michael Bland wanted to know if they'd seen these features in other places. The answer was no, but mostly because they haven't worked on other parts of Europa yet, though they'd identified other candidate sites. Another questioner pointed out that volcanism that happens on Earth subduction zones is thought to happen because the diving plate carries water with it, which lowers the melting temperature of crustal rocks. On Europa, it's all water; what would make volcanoes on the overriding plate on Europa? Kattenhorn agreed with the question and said he couldn't explain why they would be there, he could only observe that they were there, making volcanic deposits 100 meters thick in places.

Plate tectonics and plumes. We need to get back to Europa, and map it properly!!

Thanks for this great update. I teach a Geology of the Solar System class, and your blogs have become a great resource for my students.

Very interesting! On the pinkish color vs fresh surface, isn't the red material supposed to be interaction with radiation/Io sulfur? On the cryovolcanism of the overlying plate, the subduction is bound to release some energy. On Earth, as I understand it, the subduction is what drives the plate tectonics, and is a result of ongoing gravitational sorting. Here the ices would have different densities at a guess, though I would hesitate to pin down mechanisms. But the result would be: energy, forces, stresses, friction and heat. Add the "interesting chemistry" and we could have a recipe for melting brines out of the subducting plate, making the analogy with Earth go through.

These images are a fantastic way to reinforce the earth's structure for my students. The Earth's crust experiences dynamic, powerful changes, and this makes the perfect resource for the geography class. I will add this article to http://www.thornhill-tutor.com

So cool! I love the animation. There's a couple chapters on this topic in Unmasking Europa if someone reads this and wants to know more.

I just attended a seminar today by Krista Soderlund of Univ. of Texas explaining the numerical methods they have used to model Europa's oceans. She made a very compelling case for chaotic convection in the oceans which could help drive the formation of chaos terrains on the surface either directly or via coupling with a convection process within the ice layer. While the geologic processes on the surface may be similar to earth in some ways, the timescales would likely be different due to the differing viscosity of Europe's oceans versus Earth's mantle. Neat stuff!

The red could be organic material uplifted from the ocean below. At least that's a hope.

Firstly, can't epi-surface glaciers offer an alternative explanation of those 7 lines of evidence? The presence of cryo volcanoes on one side would be the cause, and not the effect in this case. (Large scale elevation changes cause/direct glacial flow). Given enough time, the surface is yellowed/browned out thanks to Io, which is why deeper material would likely be more pink (less weathering). A glacier moving across the landscape exposes this underlying material, "erases" local geological features, and more or less flattens everything in its path, and (re)moves material - putting it downstream. Secondly, I'm wondering how the observations of plumes fits into the presence/absence of tectonic activity. If the gravitational squishing between apo-Jove and peri-Jove lead to water spouting high above Europa - to auroral altitudes, as opposed to oozing out - it leads one to believe that the entire sub-surface ocean (assuming it's one big communicating fluid mass) is, to quote Freddie Mercury, "Under Pressure". To me, this isn't entirely analogous to the Earth's mantle (As in..there are big gaping holes in the crust, but I don't think the mantle's shooting/oozing out here... atleast not continuously, or even on a periodic cycle). Pushing something into a pressurised fluid would be hard. Finally, it seems that people predict subduction zones, based on the fact that the surface area of the moon doesn't change, and the radius doesn't change etc. (otherwise we'd have noted it, as well as concomitant changes in orbital period etc.). But is it possible that the new crust generated doesn't have to be offset by crust getting swallowed? Could the ice sheets change phase at compression zones - without either forming mountains, or getting subducted, or fracturing?