Over the last couple of days Cassini flew past Enceladus, Tethys and Dione, so there are lots of treats to see on the raw images website! You should go check it out for yourself, but here are a couple of real favorites.

First, of all, this stumper. Can you figure out what's going on? 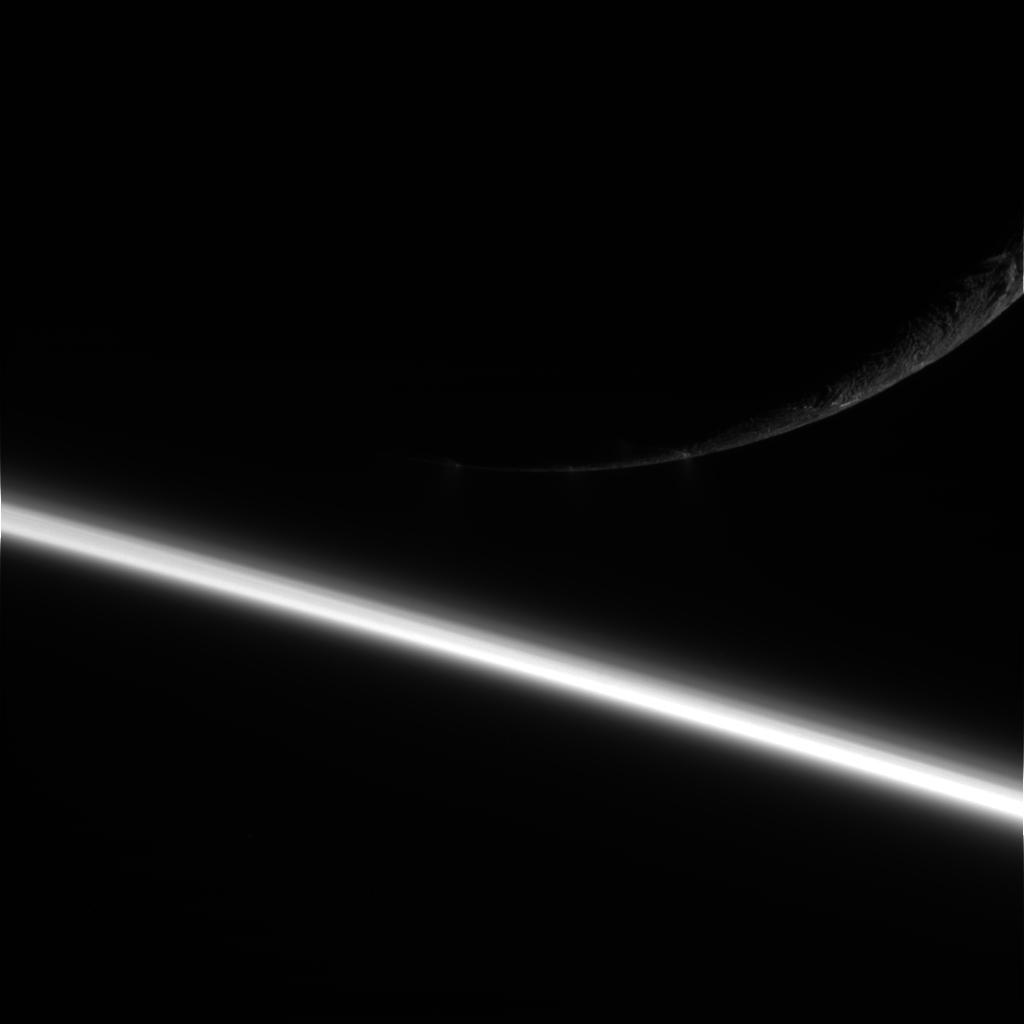 Can't figure it out? Maybe this animation will help:

Cassini looked toward the night sides of Enceladus and Saturn, catching Enceladus crossing the barely lit edge of Saturn's disk, to capture this unusual four-image animation on 13 August 2010.

In the top image, we're looking at the south pole of Enceladus, poised above Saturn's northern limb, with both bodies seen nearly from their night sides. Cool.

That's not the only Enceladus awesomeness. There are also 30, count them, 30 frames captured as Cassini was flying toward the moon, pointed at the south pole and the plumes. The south pole is now suffering through its 15-year winter and is in permanent darkness, so the plume vents are too. But the plumes rise above the winter night into daylight, so you can see them clearly as Cassini approaches. Of course I had to assemble these into an animation. Just for fun, here's an interim version of the animation, without any alignment of the frames; the point of view moves around a bit as Cassini works to keep pointed at its commanded spot, then updates to new pointing instructions.

In this version I tried to make the point of view a little less jittery. It is so cool to feel as though I'm swooping toward those plumes, and to see those south polar fissures rotating as we zoom toward them!

This animation is composed of 30 frames captured as Cassini swooped toward its targeted flyby of Enceladus on 13 August 2010. The images have been inverted so that the south pole appears as the "ground" below Cassini. Its active geysers are erupting into south polar winter darkness, but rise into daylight above Enceladus' surface.

It's more stable but not what I'd call a final product. Still, this is as much work as I'd want to do on this image set before the real data gets archived into the Planetary Data System. There's a lot of contrast in this image, from sunlit bright Enceladus ice to shadowed plumes, and the automated process that converts the Cassini images to JPEG format for posting on the raw images website is never very kind to images containing so much contrast.

Aside from Enceladus, there is also great stuff from close in to Tethys and Dione. I particularly liked this well-framed shot of the large Tethys crater Penelope. I've flipped it 180 degrees to put north up, and processed out the every-other-line truncation that causes the Cassini closeup images of icy moons to have sawtoothy edges. Note the lovely landslide fan at about the 10:00 position, and the strange skinny set of troughs that arcs through the crater from about 1:00 to about 5:00. 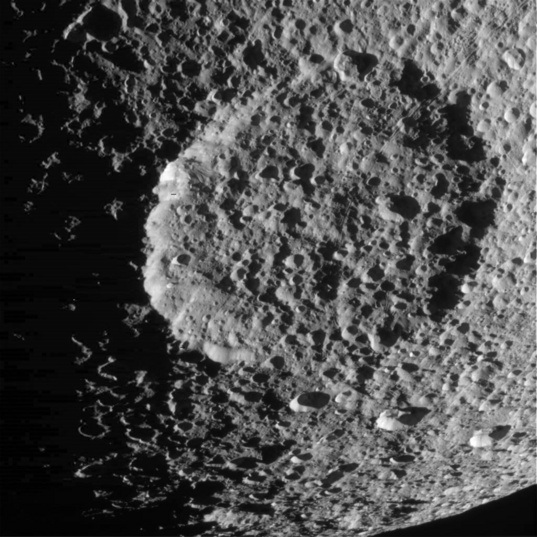 Cassini flew past Tethys on 14 August 2010 to capture this view of the crater Penelope. Below Penelope, the center crater in a line of three small craters is named Irus.