[Updated] A Government Shutdown Could Delay MAVEN's Launch to Mars

Update 2013-10-03: NASA decided that MAVEN met the requirements allowing an emergency exception, and has resumed preparing the mission for launch.

A government shutdown could affect the launch schedule for MAVEN, NASA's next mission to Mars.

Dwane Brown, Senior Public Affairs Officer at NASA, confirmed that "a shutdown could delay the pre-launch processing currently under way with a possible impact to the scheduled Nov. 18 launch date."

MAVEN is NASA's latest mission to Mars. It is an orbiter that will look for clues to understand the disappearance of the red planet's atmosphere. The spacecraft currently sits in a clean room at NASA's Kennedy Space Center, going through its final stages of assembly and checkout prior to launch. 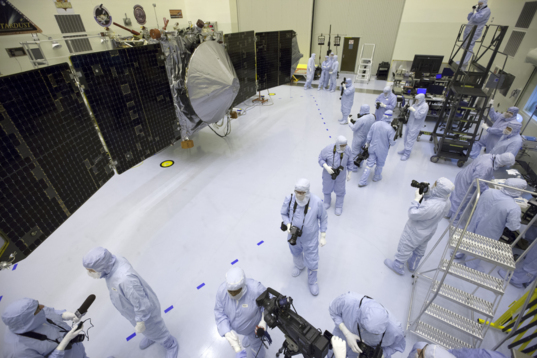 On September 27, 2013, members of the media were given a final opportunity to view the MAVEN Mars orbiter before it was prepared for launch.

The U.S. government shut down on Oct 1st, sending approximately 97% of NASA's total workforce home without pay, leaving only a skeleton crew to support the astronauts on the International Space Station.

NASA's shutdown guidelines [pdf] state that "if a space launch has not commenced or is not in flight, preparation activities will generally cease, except to maintain powered systems to monitor and maintain the safety of the assets."

If that sounds a little vague, it is. But it's really hard to know what the impact to MAVEN's schedule will be. It's an understandably fluid situation, and the full impact of a shutdown – if it even happens at all – won't be known until after the government resumes its business. Even Lockheed-Martin, the prime contractor building MAVEN, doesn't know what will happen yet.

The worse-case scenario is that MAVEN misses its launch opportunity to Mars. These only come around every 26 months and remain open for only a short time. MAVEN's has only 20 days between November 18th and December 7th. If MAVEN cannot launch in time, it will have to wait for the next opportunity in early 2016, a delay that would cost NASA's Planetary Science Division tens of millions of dollars it cannot afford. 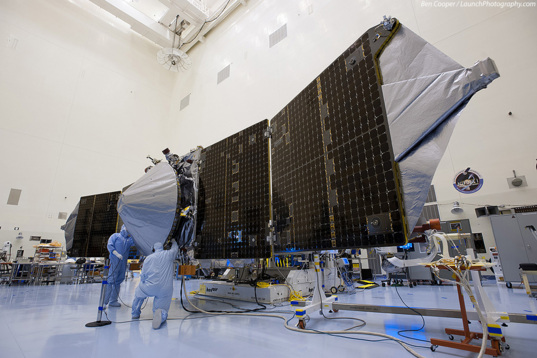 MAVEN in the clean room

Ben Cooper was one of a few members of the media privileged to visit the MAVEN Mars orbiter in the clean room at Kennedy Space Center as it underwent its final preparations for launch to Mars.

More pictures of MAVEN in its clean room.

#MAVEN is shut down right now. Work at gov't facilities is undergoing orderly shutdown. Hardware will be put into known, stable, safe state.

#MAVEN contractors can continue working as long as there is money on the contract and the work is not at a government facility.

We'll turn #MAVEN back on when told that we can. We have some margin days built in & are absolutely committed to launch at this opportunity.

The #MAVEN team will be ready to turn back on and waiting to see how things develop over the next several days with the #governmentshutdown.

NASA is not lacking drama these days or ever. I suspect that the Maven project team and KSC can and will make up for two weeks of furlough. Longer than that then as Chick Hearn might have said - its crunch time! Despite the talk, given that payload check out is scripted and methodical, I think scientists will not miss the chance to point Maven instruments at Siding Spring Comet on 10/19/2014. They would find a way. A two year launch delay would foil that too.

Yay for the exemption!