JPL's Mohawk Guy Invited to Attend the State of the Union Address, Despite Cuts to Planetary Exploration

SCPR reported yesterday that JPL's Mohawk Guy, Bobak Ferdowsi, received a special invitation to join First Lady Michelle Obama as a guest of for the President's State of the Union address. Speculation is that he's there to reinforce the President's message of the importance of STEM (Science, Technology, Engineering, and Math) education. Ferdowsi volunteers with kids to promote engineering. 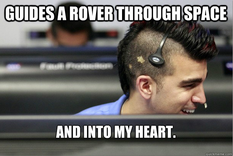 Mohawk Guy memes took off after the landing of the Curiosity rover in August of 2012.

Ferdowsi was also invited to walk in the Inaugural parade next to a full-size model of the Curiosity rover.

It's fantastic that the President and the White House see the value of Ferdowsi and of the incredible achievements made by NASA's planetary exploration program. Though I can't get past the disconnect between embracing Ferdowsi and Curiosity and the OMB's efforts to slash funding for the very program they represent. NASA's Planetary Science Division was cut 21% in the President's budget, which reduced the Mars program by almost 40%.

Hopefully, this is a sign that the Administration has reconsidered the budget of this small division within NASA. The 2014 budget should be released sometime in the next few weeks.

Make a Difference! Write Congress in support of Planetary Exploration

The Planetary Society's Save Our Science Campaign

Fat chance this administration is going to give NASA more funds. Makes one wish for the Bush administration where they actually cared about space (remember Constellation and the mission to Mars, anyone?).