Neil Armstrong changed the world. He was an excellent engineer and an outstanding pilot. He got the assignment to land a completely novel rocket machine on the Earth’s Moon, because he was the perfect man for the job: He could really fly; he had excellent judgment about the capabilities of his ship; and above all, he had a remarkable ability to keep his wits about him in extraordinarily dangerous situations.

The stories are legend. He learned to land on the Moon by flying a test machine called the Lunar Landing Research Vehicle (your LLRV). It looked like a metal insect or a complicated umbrella with no fabric -- and barely enough means to control it. The thing went out of control. He ejected just high enough above the ground for his parachute to open and not kill him. The story goes that he just packed up his chute and his gear, went up to his desk, and filled out the proper paperwork -- another day at the office. 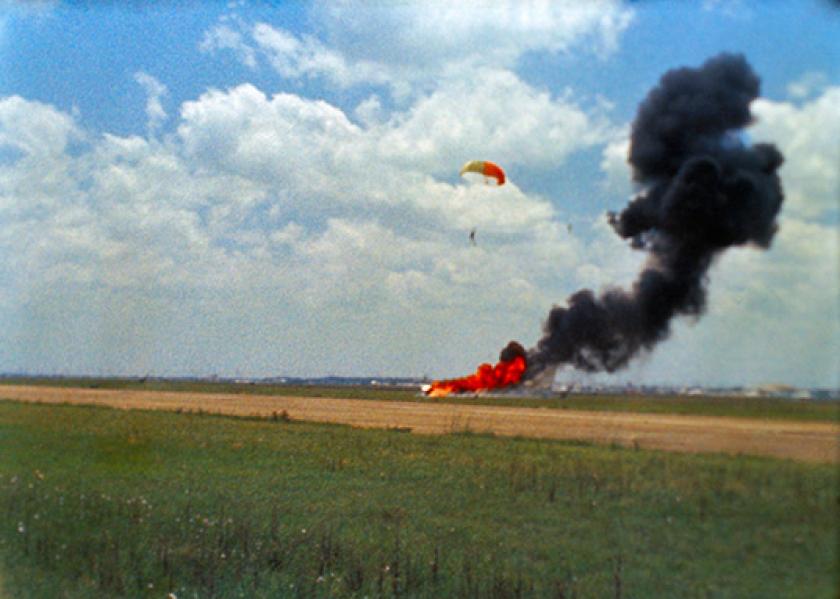 He managed to get his Gemini capsule to join or dock with an Athena rocket booster in orbit ahead of him. When the two craft were joined, and there was a wiring failure, the whole assembly started to tumble— in zero gravity, with no ejection seat. Because of his ability to concentrate and his extensive experience and confidence. He righted his ship and got back to Earth. If it hadn’t been an expert test pilot at the helm, well, humankind’s journey to the Moon might have happened a long time later.

Flying the X-15 rocket plane, he apparently skipped off the atmosphere– a phenomenon we learned a great deal about thanks to his wild ride. He steered back and forth across California in machine that looks a bit like a big pipe with US Air Force decals on the side. He banked and pitched until he could get the machine aligned with the runway and on the ground in one piece.

With all this, he landed the Lunar Excursion Module (your LEM) on the Moon. “One small step for a man, one giant leap for mankind.” Like many people my age, I was on my knees with my face as close to our General Electric black & white television as my parents would allow. He changed the world. And of course, he certainly changed me. I went on to become a professional engineer and now the CEO of this organization with a deep love of science and especially engineering, using science to solve problems and make things.

For people everywhere, Neil Armstrong was a hero I think not just because he did his dangerous job successfully, but because he was so matter-of-fact about his profession. It was a day at his office. We all owe him a debt. Just think how the word would be different, if he had crashed on the Moon, or not managed to return from the Moon, or missed the Earth on his way back. None of us would think of our place in the cosmos, our place in space differently.

Neil Armstrong raised the expectations, the hopes and dreams, of every human on Earth. Thanks to him, we all believe that humans can achieve great things -- that we can learn about our place among the stars -- that we can all reach up and out -- that we can fly, and change the world. It turns out, yours was a pretty big step after all. Thank you, sir.

Planetary Society members are invited to share their own reflections on Neil Armstrong here.

There are few photos of Neil Armstrong on the Moon because he was the one holding the camera. Here, he casts a shadow across a panoramic view of the landing site.

This was way before my time yet it still impacts people like me generations after...I may not have chosen a science career, but I have always looked at the world in a scientific manor (and there is something spiritual about that). Thanks to Armstrong and all the brilliant minds of NASA, people like me are reaping the benefits of this bold step so long ago (well not really that long ago :P). This also means the expectations are greater for us with all the changes in the world going on (naturally and man made) Science is now more important than ever to pursue in" Who we are? Where did we come from? And how do we live harmoniously with this planet without killing ourselves?" RIP Neil Armstrong and thank you so much for really moving us not just one step closer to Peace, Love and Awesomeness, but a giant leap ~_~

I am very saddened to learn of the passing of Neil Armstrong today.He was a great man with a kind heart. He will be missed by this nation.Take a good look at the Moon and think of Neil and his family.

It was 2 1/2 months before my 3rd birthday when Neil Armstrong landed on the moon. Watching this on TV is actually my first childhood memory, and one I am very happy to have. My 2 years old son's middle name is Neil in honor of Neil Armstrong.Others like Pete Conrad or Alan Shepard were funnier or more determined, but Neil was the exact right guy to have made that first step on the Moon.

It is always sad to see people like Neil Armstrong pass on to the ages. He represented the kind of people that we need more of in this world today.

The story of Neil Armstrong managing Gemini 8 while it was spinning out of control is incredible. Between that and all the other experimental aircraft he flew, the man must have been just about the best pilot there was. I was surprised by how sad I felt at his passing. I second Neil deGrasse Tyson's take on it- "Neil Armstrong (1930-2012) was not entirely human. He was the spiritual repository of our spacefaring dreams & ambitions. In death, a little bit of us all dies with him." http://tranquilitybaseblog.blogspot.com/

A true hero in every sense. He will be missed, and may we honor his legacy by going on to do even bolder and more amazing things.

The man in the moon is now Neil Armstrong.

The baddest set of C&B's to ever float around in micro-gravity...

Thank you Bill for this excellent article. I was living in Sherman Oaks attending elementary school when Neil Armstrong landed the Apollo 11 LEM. Amazing how you remember where you were during historic events.

Thanks, Bill. That's one of the most beautiful and moving eulogies of the many I've read this week. Not to be disrespectful at a time like this, but wasn't it an Agena booster that Gemini 8 docked with?

Neil Armstrong is arguably the most important person on Earth to help us sustain modern achievements because of his great ability to be the Leader in Scientific Exploration! God Bless Niel Armstrong!!! And The United States!!!

I will always remember Armstrong for the "grace under pressure" that he showed, while avoiding rocks and craters to land on the moon. And Bill - it's great to see a fellow Cornellian as IDA's Dark Sky Ambassador!