Armed with new software that will transmit almost three times as much health and status data back to Earth than it did during last year's test flight, LightSail has completed its first round of flight testing. The operational readiness test, or ORT, used LightSail's engineering clone, BenchSat, to simulate key points of the upcoming solar sailing mission in real-time. Data was transmitted wirelessly to the same Cal Poly San Luis Obispo ground station the spacecraft uses during flight. The test was largely successful, with no major problems identified.

LightSail will soon undergo boom and solar sail testing, but first, the spacecraft's flight software was loaded on BenchSat for ground station testing. The entire LightSail team joined the phone bridge that will used during the actual mission, with members calling in from Atlanta, Pasadena, San Luis Obispo and Moffett Field, California. Key points of the mission were simulated, including a typical ground station pass, a solar panel and sail deployment, and an image thumbnail downlink.

Once BenchSat was booted up, it began transmitting data packets at 7-second intervals. As the Cal Poly servers received the packets, they were funneled to a web page displaying a series of hyperlinks: 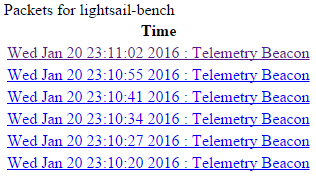 Each hyperlink opens a text page containing 235 lines of sensor data from the spacecraft (the final number may change slightly). This is almost triple the number of data points (87) transmitted by the LightSail test unit. Many problem areas from the first mission—such as cameras and batteries—have addtional status indicators.

Each camera, for instance, now has lines displaying power and heater status, last contact time, and temperature. All eight batteries have easy-to-interpret checks for voltage and current states. All of the data can be exported into spreadsheet form, allowing the team to track specific sensors over time.

After simulating a ground station pass, the team uploaded a command to BenchSat that deploys the four spring-loaded solar panels. During the actual mission, a coil of wire will be heated, searing through a fishing line-like material holding the panels closed. To verify this command worked, the team monitored the power level of the corresponding circuit on BenchSat. There are also four new lines of telemetry to indicate whether each panel is open.

Next, it was on to a simulated solar sail deployment. Up until this point, telemetry from the spacecraft showed these two lines regarding the state of the sail deployment motor:

A new telemetry packet came in from the spacecraft, and lines 233 and 234 had changed:

"Mission, this is TC, go ahead," replied Alex Diaz. The sound of a spinning motor could be heard in the background. BenchSat's motor spins, but it isn't actually connected to sail booms. Full deployment tests on the flight unit will come later.

As the motor spun, BenchSat's camera clicked away, simulating the way LightSail captures images during the deployment event in space. A command was sent to download the thumbnails, which were posted on the team's internal Wiki page. During the mission, these thumbnails will be used to select individual images for download.

LightSail also starts full system testing this week. The team will mount the spacecraft on its specially designed, low-friction table and command a boom deployment with no sails attached. Once the booms are out, white epoxy markings will be added that act as on-orbit measuring sticks, showing how far the sails have been deployed.

Then comes a full sail deployment, which will pave the way for a full day-in-the-life test, in which the operational readiness test is repeated using the actual spacecraft. It will be the last major test to validate LightSail is ready for environmental testing and integration into its P-POD. The P-POD will then be handed over to Georgia Tech for installation into the Prox-1 spacecraft.