Editor's note: Don Davis originally shared this story on his Facebook page and I asked him to expand upon it for a guest blog entry. --ESL

In 1971 I was being trained to work with the airbrush by the map artists at the U.S. Geological Survey's Branch of Astrogeologic Studies in Flagstaff. However, the project I ended up spending about a quarter of a man-year on was a hand-painted map globe of Mars. It was black and white, 16 inches (40 centimeters) in diameter, painted with oils, on a globe originally surfaced with a chalkboard. It preserves Mars as seen by the Mariner 4, 6, and 7 flyby missions. 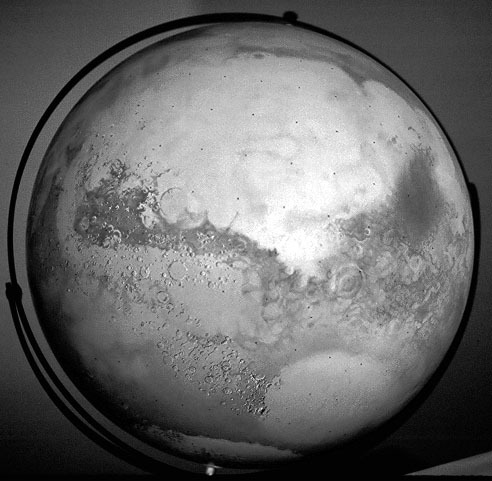 I just heard it was found among the belongings of Jack McCauley, a recently deceased planetary geologist who was a mentor of mine there. I'm glad to know it exists. It is a human-produced version of the kind of thing we now do with computer assistance. Here is the story of that globe and its historical context.

The first collection of maps and images of Mars I had seen were those published in 1960 in The Exploration Of Mars by Willy Ley, Wernher Von Braun and Chesley Bonestell. Soon after, I was hired by the U. S. Geological Survey Branch of Astrogeologic Studies as a cartographic aide. In November 1968, I became aware of more of the heritage of Earth-based mapping of Mars through the Larousse Encyclopedia of Astronomy by Lucien Rudaux and Gerard de Vaucouleurs. That, and the Atlas of The Planets by Vincent De Callatay and Andouin Dollfus, which was a nice early space-age summary, made me aware of some of the great Mars observers like Antoniadi, and especially the great French observers Lyot, Dollfus, and the Greco-French observer Jean-Henri Focas. The latter's 1956 map was the best glimpse of Mars ever made by someone compiling the view through a telescope. All these astronomers had the benefit of the excellent seeing conditions at the Pic Du Midi Observatory in the French Pyrenees.

Any long-time Mars fans out there will remember when the only aspect of Mars that could be seen and mapped through telescopes was how its albedo, or surface brightness, varied. All the maps of Mars that were based on drawings bear the inevitable traces of differences of stylization and level of drawing skill. The 'canals' were almost gone from the best Mars maps by the 60s, although the ACIC (Aeronautical Chart and Information Center) 1962 Earth based map of Mars, MEC-1, still showed them as hazy lines. An elderly Vesto Slipher, Director at Lowell observatory after Lowell's death in 1916, looked over the shoulder of Patricia Bridges and coached her, as I recall hearing, to make them appear as a faint hazy spiderweb across the light areas.

A grayscale printing of this map existed by the time I was hired at the USGS November 1968, which had the Mariner 4 crater detail delicately airbrushed in. When I transferred from Menlo Park to the Flagstaff office in mid-1971, they purchased for me a Paasce AB, the Stradivarius Violin of airbrushes. With it, working optimally, one can spray a circle 1 millimeter in diameter. I practiced the techniques of airbrush mapping. As things turned out, though, I was never to actually work on an airbrushed map.

Astrogeologist Jack McCauley wanted a globe incorporating all current information about Mars. This was going to be a major effort and shifted my tools back to traditional oil painting methods for the rest of my time there. McCauley worked with Don Wilhelms on the great Lunar Earthside Geologic map, and was particularly interested in the Moon's Orientale basin. Jack suspected the Martian circular bright area named 'Hellas' was such a basin filled with bright dust, even before Mariners 6 and 7 began to hint at this. Under his direction I was to do several works portraying Mars, reflecting his field work in the coastal deserts of Peru, which, he was sure, were similar to likely Martian surface details.

McCauley introduced me to the great French astronomer Gerard de Vaucouleurs: an earnest, short gentleman, soft-spoken, but with frank opinions. I also met Charles 'Chick' Capen, who worked at Lowell: an enthusiastic fellow and long-time planetary observer. Both were among the great Mars observers of all time.

When told of my Mars globe project, de Vaucouleurs asked about my observing experience, which was then nil. He told me I shouldn't be making globes of Mars without seeing it through a telescope. It was then arranged to have me accompany him and Capen for a night of observing through the USGS 30-inch reflector near Flagstaff. It turned out to be a beautifully clear, dark night. During an interval, when they were writing up their observations, I made a drawing of how Mars looked that night, near its closest approach in the Great Opposition of 1971. 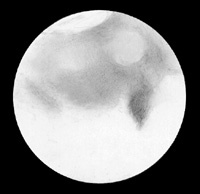 De Vaucouleurs looked over the drawing and pointed out things I had missed, like a darker streak in the south polar cap. He made excellent objective-looking drawings of Mars, refining a set that night which appeared in the November 1971 Sky and Telescope, page 263.

Later we looked at Saturn, which was transfixing. Rings wide open, it looked just like the Stephen Larson photograph, which was, for years, the best photo of Saturn ever made. 'Chick' Capen later would let me show up at the 'wedding cake' dome and look at Mars through the big refractor at Lowell, carried up to the big brass eyepiece by the same rickety hand-cranked wooden hoist that Lowell himself used. Mars through the refractor looked a light apricot color with blue-green darker regions. The seeing was awful every time I looked at it there, Mars looking like a print seen through flowing water. Capen once showed me a flat file drawer filled with printed maps of Mars going back a century and more.

Thus prepared, I created the globe-shaped oil painting, at 18 inches diameter equivalent to a detailed flat painting 56 inches wide. The Survey made available to me the best versions of prints from the Mariner 6 and 7 missions. I added latitude and longitude grids to them based on references. Once I had whitened the chalkboard surface of the blank globe with gesso and sanded it to a smooth surface, I placed 'tic marks' every 10 degrees with a 'Rapidograph' technical drawing pen, commonly used in pre-digital map preparation and another tool I first encountered at the Survey.

To paint the surface, I used oil, in contrast to the airbrushes in use around me. I applied ivory black and titanium white oil paint with dry-brush, glaze, and fine-brush work methods. I added sharp-shaded topographic detail with the Rapidograph pen. I wanted to pay particular attention to making a space-age update of all those beautiful maps that came before, combining their heritage with the first close-up views of what they were incompletely seeing. Near the north pole there was still only Earth-based information to work from. It was incredible fun, and all the time planetary geologists were passing by to share this or that exciting discovery.

I prepared, and still have, oil and pencil studies where I used every Mariner far-encounter Mars photo to make as detailed a map of the 'classical' markings as possible. Something had to appear in at least two images before I included it. In numerous places, you can see hints of what was revealed later, outlined by the albedo markings.

They used my globe as a reference for the first planet-wide mapping mosaics gathered by Mariner 9. This surviving print from that process shows the planet's visibility and its dark markings just 'recovering' from the all enshrouding dust storm, revealed in rows of new photos at left.

Mars cartography before then, including a more normal albedo pattern, is represented by my globe. Only in the far northern latitudes until then were we still limited to Earth based telescope based reference. They put thin black tape on the globe to outline the Mars Chart boundaries.

I have an album of photos of the globe from photos made by a photographer in Flagstaff. I 'normalized' these globe photos to suppress the effects of irregular lighting. Here is one print showing the whole thing:

And from a Polaroid, another hemisphere:

A Mars map contemporary with my globe in source data, incorporating only Lowell Observatory 1969 photos portrayed in airbrush by another of the great airbrush mappers Jay Inge, appears in the May 1972 Sky and Telescope, page 276.

The dust storm shrouding Mars in November 1971 as the Mariner 9 spacecraft reached it put a hold on the planet-wide mapping. I returned to the Bay Area and did mostly lunar paintings and illustrations at the Menlo office of the Survey. The Martian 'dark' areas gradually reemerged as more normal winds returned, often as dark spots merging. Part of the floor of Vallis Marineris was seen to be dark. An interesting series of early Mars maps trying to correlate the spacecraft and telescopic observations were done under the guidance of Gerard de Vaucouleurs. These map portrayals, appearing in the September 1973 Sky and Telescope, conformed to the USGS mapping scheme of chart boundaries. I recall Hal Masursky criticizing them for 'filling in' the entire canyon when that hadn't been verified yet as happening.  These maps were done by James Roth, Kay Walker and Ellen Bergman using airbrush and even pencil. Another artist who tried to use pencil as a cartographic tool was Charles Cross, who later published maps of the Moon, Mars and Mercury. The last was the closest to success he came with that technique.

For some time to come Mars maps were published with the shaded relief topography, completed about a year after the arrival of Mariner 9 to Mars, yet with Earth-based albedo markings overlaid. Early published Mars globes show this trend. Jay Inge continued this practice in inset art of Mars for a beautifully designed National Geographic sky map. It was not until airbrushed overlay art sheets were made a couple years later for the USGS global and some sectional maps that the Martian albedo markings were given equal attention. The airbrush mappers also prepared a chart of the mountainous Northern Argyre Basin region, a potential landing site for the 1973 Mars 6 mission, for the Soviets. After it failed to land, I recall Dick Pike fretting that they would blame us for the mishap.