Your Guide to Europa Clipper

Is there life on Jupiter's icy moon?

When Galileo Galilei pointed his makeshift telescope towards Jupiter in the early 1600s, he was astonished to see 4 points of light alongside the giant planet. He soon figured out they weren't fixed stars, but “stars wandering around Jupiter like Venus and Mercury around the Sun.” If Jupiter could have satellites, then it was also possible that the Moon could orbit Earth while both, together, orbited the Sun, as Copernicus had argued.

NASA's aptly named Galileo spacecraft visited Jupiter nearly 4 centuries later, orbiting the planet and flying by moons during its 8-year mission from 1995 to 2003. Among Galileo’s discoveries: Europa has a liquid ocean beneath its icy surface. Scientists figured this out in the same way that a metal detector detects keys in your pocket. The detector creates a magnetic field, causing anything conductive to induce another magnetic field that sets off the detector. In Galileo's case, Jupiter supplied the magnetic field, and something deep inside Europa—likely a conductive, saltwater ocean—generated a secondary magnetic field that Galileo detected with its magnetometer. Scientists believe Europa's ocean has more than twice the amount of water as Earth's oceans. Does it also harbor life? 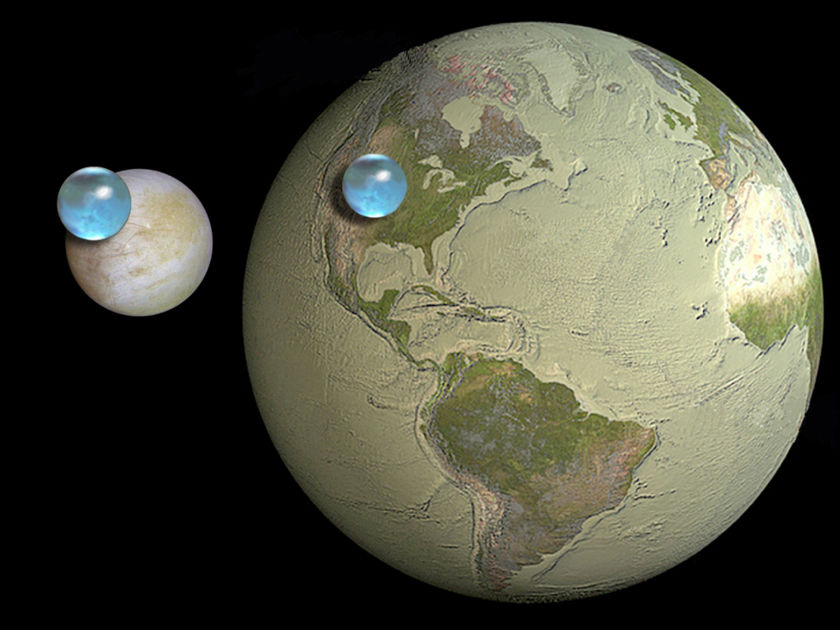 Water on Europa vs. Water on Earth

This graphic shows the amount of liquid water on Earth vs. Europa.

Life beyond Earth might be more exotic than anything we can imagine. But here on Earth, life requires a source of energy like sunlight, a liquid solvent like water, and elements like carbon that can easily bond with other elements to form complex organic molecules.

No sunlight reaches Europa's ocean, since the surface is covered with a 20-kilometer-thick ice shell. But there could be other sources of energy, like hydrothermal vents on the ocean floor releasing heat from the moon's core. In the deepest, darkest parts of Earth's oceans, we often find these vents teeming with life—no sunlight required. Another possible source of energy could be metabolism-driving molecules like methane, ammonia, and hydrogen, created by Jupiter's intense radiation bombarding the top of the moon's ice shell.

In the deepest, darkest parts of Earth's oceans, hyrdothermal vents release heat from the planet's core. These vents are often teeming with life—no sunlight required.

Getting Europa Clipper to the launch pad

Every 10 years, the planetary science community creates a report called the Decadal Survey that advises NASA on what missions it should pursue in the coming decade. In the 2013-2022 Decadal Survey, a Europa mission was one of 3 top recommendations.

The Planetary Society made a Europa mission its top advocacy priority that same year, teaming up with members of Congress to get the mission funded. Planetary Society members sent tens of thousands of letters to their congressional representatives, and sponsored a "Lure of Europa" event on Capitol Hill bringing together scientists, politicians, and space advocates to support the mission. NASA formally greenlit development of the Europa Clipper spacecraft in 2015.

How Europa Clipper will help us search for life

Jupiter’s intense radiation means the Europa Clipper spacecraft must be radiation-hardened avoid orbiting Europa directly, while a probe at Saturn would not have those constraints. However, there is enough sunlight at Jupiter for a spacecraft to use solar power, which lowers costs and reduces complexity. Every spacecraft to visit Saturn so far has used nuclear fuel for energy.

Europa Clipper is a huge spacecraft packed with 10 science instruments to scan Europa from above and directly sample the moon's tenuous atmosphere. Its solar panels span 22.3meters, longer than a basketball court. 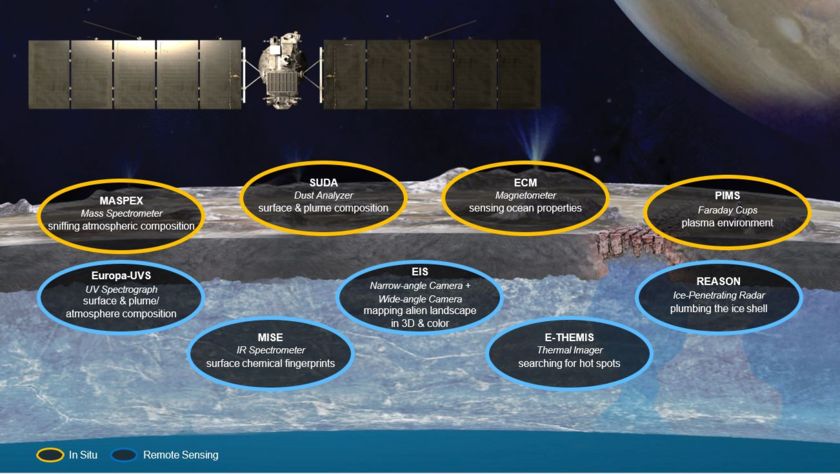 Europa Clipper is a huge spacecraft packed with 10 science instruments to scan Europa from above and directly sample the moon's tenuous atmosphere.

Among other things, the instruments will:

Jupiter's magnetic field traps high-energy particles from our Sun and speeds them up like a giant particle accelerator, creating a dangerous radiation environment for any spacecraft that dares to fly through it. For this reason, Europa Clipper won't orbit Europa directly. It will stay in a long orbit around Jupiter, occasionally diving through the radiation to collect data from Europa before fleeing the scene. This strategy will allow Europa Clipper to stay at Jupiter for years rather than days or months. 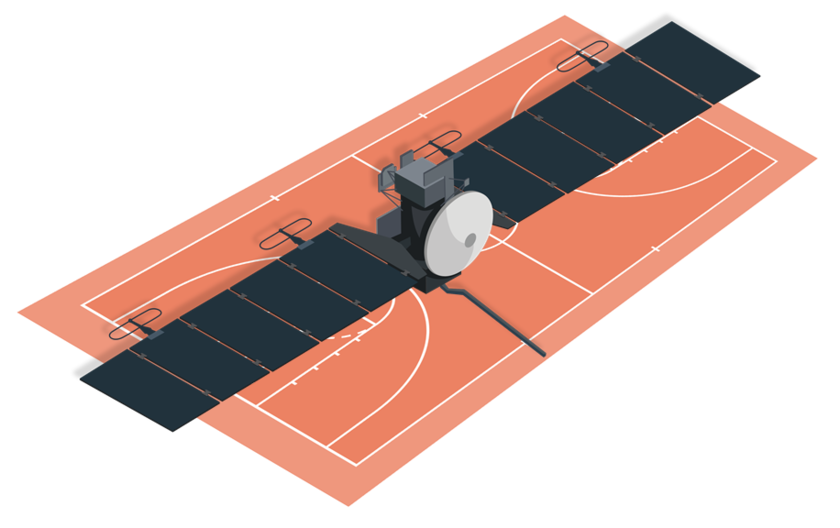 When Will Europa Clipper Launch?

Europa Clipper could launch as early as 2023, but it all depends on the choice of rocket. Congress mandated that Europa Clipper launch on NASA's Space Launch System, or SLS, but a recent report by the NASA Office of Inspector General says a spare SLS won't be available until at least 2025. Using the beefy SLS would allow Clipper to fly to Europa directly and arrive in 2028, but that assumes a 2025 launch, which is uncertain given the rocket's role in NASA's Artemis program.

If NASA can avoid the Congressional SLS requirement, Europa Clipper could launch as soon as 2023 on a less-expensive commercial rocket like the SpaceX Falcon Heavy or United Launch Alliance Delta IV Heavy. A commercial rocket would force Europa Clipper to rely on gravity assists at Venus and Earth for an extra boost, and it would not arrive until 2030, given a 2023 launch.

Does Europa Clipper include a lander?

No. NASA has proposed a separate lander mission that would spend a month on Europa’s surface, feeding samples into instruments designed to detect organic materials. The mission has not been formally approved. It's possible the Europa Clipper mission will bring CubeSats along to conduct additional science investigations, but those missions have yet to be designed and approved.