Asteroid Bennu regularly ejects surface particles into space, scientists from NASA's OSIRIS-REx mission announced today. The discovery puts Bennu in a class of so-called "active asteroids," and marks the first time a spacecraft has ever seen the phenomenon first-hand. Principal investigator Dante Lauretta called the discovery "one of the biggest surprises of my scientific career." Mission scientists also provided updates on Bennu's rotation rate and the plan to collect a sample of regolith from the surface next year. 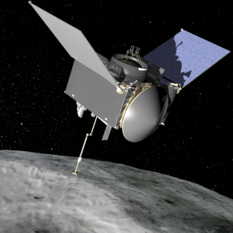 The mission updates came from a newly released Nature paper (paywalled), a presentation at the 50th Lunar and Planetary Science Conference at The Woodlands, Texas, and a call with reporters today. OSIRIS-REx first saw the phenomenon in optical navigation camera images on 6 January 2019, and has since seen it occur 10 more times. Each ejection event can involve dozens or hundreds of particles ranging in size from millimeter-sized sand grains up to several-centimeter cobbles. The ejection speeds have varied from a few centimeters up to about 3 meters per second, meaning that some material falls back to the surface, some enters orbit briefly, and some escapes Bennu's gravity entirely. 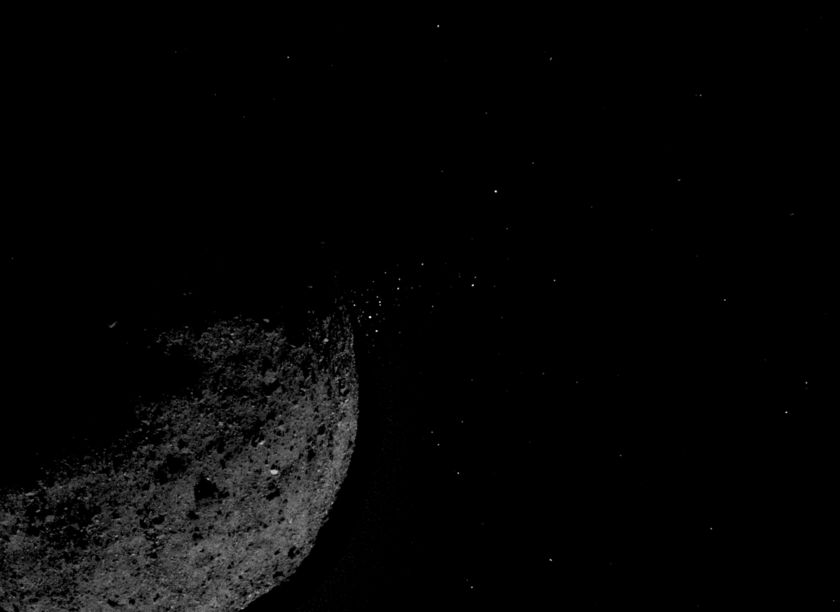 This view of asteroid Bennu ejecting particles from its surface on 19 January 2019 was created by combining two images taken by OSIRIS-REx's NavCam 1 imager: a short exposure image (1.4 ms), which shows the asteroid clearly, and a long exposure image (5 sec), which shows the particles clearly. Other image processing techniques were also applied, such as cropping and adjusting the brightness and contrast of each layer.

Bennu is now one of about a dozen active asteroids that share at least some characteristics with comets. The OSIRIS-REx team doesn't know what's causing Bennu particles to suddenly jump off of the surface. The first step in understanding the process is to trace the flying particles’ paths back to their sources.

The discovery was a surprise because these ejection events weren’t detected from Earth, though there was at least some speculation ahead of OSIRIS-REx's arrival that Bennu might be an active asteroid. Upon learning that Bennu was active, NASA performed an analysis using orbital debris models for Earth orbit to see if the particles posed any danger to OSIRIS-REx, and determined the spacecraft was safe.

Another interesting bit of trivia is that the particle ejections could, in theory, be associated with an annual meteor shower here on Earth; such a shower would happen in September, in the southern hemisphere.

One of the mission's major goals was to measure the Yarkovsky effect, a force caused by the asteroid's continual absorption of solar radiation and re-radiation of heat as it rotates in and out of sunlight. The Yarkovsky effect is one part of a larger effect called YORP that can alter an asteroid's trajectory, which is important for tracking potentially hazardous near-Earth asteroids.

Bennu's rotation rate has been increasing since 1999, and now, OSIRIS-REx observations have concluded that this increase is caused by the YORP effect. Just how much of an impact does this force have on Bennu? Every 1.5 million years, its rotation rate will double! Scientists believe YORP can eventually spin asteroids fast enough to break them apart, and it could be a contributing factor behind Bennu's particle ejections, though Lauretta cautioned it's too early to tell.

As we've previously noted, Bennu is much more rugged than expected. Ground-based radio astronomy led the OSIRIS-REx team to believe the surface was mostly covered in centimeter-size particles, which informed the design of TAGSAM sample collector. The team now knows Bennu is covered in boulders, 200 of which have been found to have diameters greater than 10 meters. 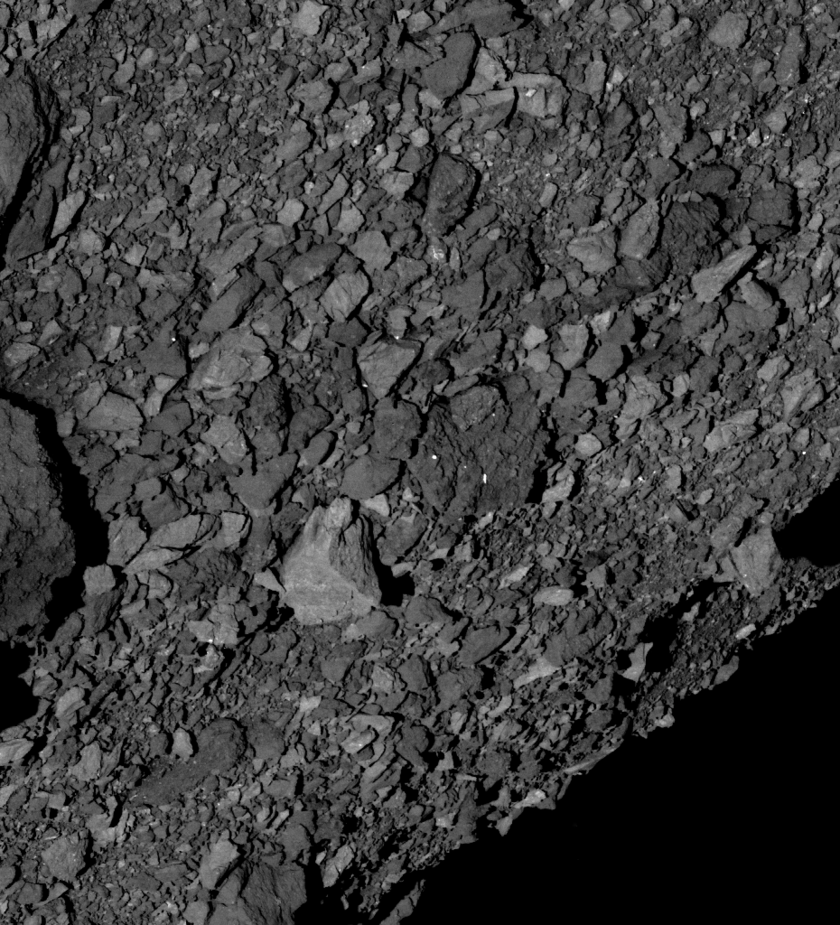 This image shows a view across asteroid Bennu’s southern hemisphere and into space, and it demonstrates the number and distribution of boulders across Bennu’s surface. The image was obtained on 7 March by the OSIRIS-REx PolyCam camera from a distance of about 5 kilometers. The large, light-colored boulder just below the center of the image is about 7.4 meters.

Fortunately, there appear to be a few fine-grained "regolith ponds" 10 to 20 meters across that might be ideal for sample collection: 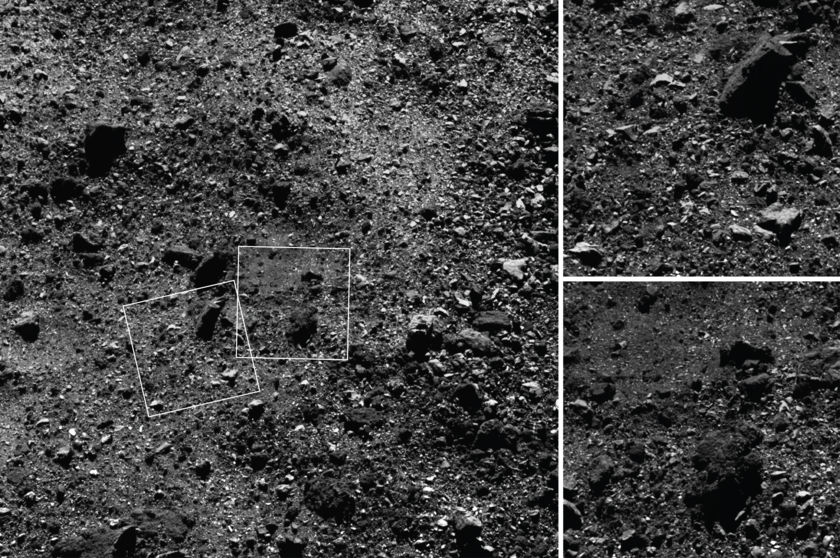 This trio of images acquired by NASA’s OSIRIS-REx spacecraft on 25 February approximately 1.8 kilometers from the surface shows a wide shot and two close-ups of a region in Bennu’s northern hemisphere. The wide-angle image (left), obtained by the spacecraft’s MapCam camera, shows a 180-meter-wide area with many rocks, including some large boulders, and a “pond” of regolith that is mostly devoid of large rocks. The two closer images, obtained by the high-resolution PolyCam camera, show details of areas in the MapCam image, specifically a 15-meter boulder (top) and the regolith pond (bottom). The PolyCam frames are 31 meters across.

That’s a smaller target than the OSIRIS-REx team had originally planned to hit. The team is already calling the eventual collection activity a "bulls-eye tag"; if the spacecraft was a dart simply aiming for a dartboard before, it's now trying to hit the bulls-eye.

Fortunately, the spacecraft's guidance and navigation performance at Bennu has been much better than expected. Coralie Adam, the OSIRIS-REx flight navigator for KinetX Aerospace, said OSIRIS-REx's positioning at Bennu is better than GPS back on Earth. OSIRIS-REx will continue to survey Bennu throughout 2019, and begin conducting detailed reconnaissance of potential sample sites this fall. Sample collection is still on track for July 2020.

Dante Lauretta called the discovery "one of the biggest surprises of my scientific career." I was considered a crackpot for suggesting that Bennu and Ryugu were likely active asteroids 9 months ago. I was also accused of sealioning in my attempt to tag science communicators such that my prediction could provably be in their twitter history. I am not surprised at this activity, as the low albedo is a pointer to the likeliness of similarities with comets. I would suggest that most, maybe all low albedo asteroids are active, and they just happen to be below thresholds of visibility from Earth.