Japan's Hayabusa2 spacecraft will try to collect a sample from asteroid Ryugu during the week of 18 February, mission officials said during a press briefing last week. Should problems arise, a backup week is available starting 4 March. The team is now considering two sample collection sites, the smaller of which is just a few meters across.

Hayabusa2 spent the end of 2018 looping a safe distance from asteroid Ryugu and back again during solar conjunction, returning to its home position 20 kilometers away on 29 December.

JAXA's website has some interesting details about how the team tried to communicate with—or at least, get some very basic information from—Hayabusa2 during solar conjunction. Computer data is binary, a stream of zeros and ones. Spacecraft transmit the zeros and ones by varying the intensity of the spacecraft's radio signal. Unfortunately, when a spacecraft is next to the Sun in the sky, plasma near the Sun's surface interferes with the signal, making the intensity fluctuate so badly some zeros look like ones and some ones look like zeros. To compensate for this, Hayabusa2 sent the same information multiple times. Engineers gave computer algorithms on Earth several copies of the same message, using them to sort out which parts of the signal were supposed to be zeros and which parts were supposed to be ones.

Now that Ryugu and the Sun aren't so close to each other in the sky, Hayabusa2 is back to normal operations, and that means preparing for touchdown and sample collection! The first touchdown is planned for the week of 18 February, with a backup the week of 4 March.

As a reminder, Ryugu is surprisingly rocky, and there are very few places to safely bring the spacecraft down to collect a sample. The team is still considering a circular, 20-meter-wide site called L08-B—more specifically, an irregular region within that called L08-B1—but they are also eyeballing another spot a few meters away called L08-E1. 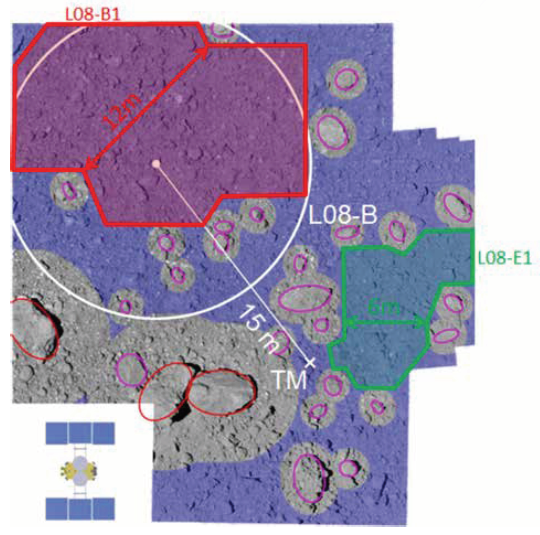 There are pros and cons to both sites. L08-B1 is 12 meters wide at its narrowest point, which gives Hayabusa2 plenty of margin (the spacecraft measures 6 meters wide across its solar panels). But despite being free of larger boulders, L08-B1 is scattered with rocks about 60 centimeters in size. The spacecraft's sampler horn is only a meter long.

L08-E1, on the other hand, has smaller rocks, under 60 centimeters in size. But here's the catch: at its narrowest point, the landing site is just 6 meters wide—the same size as the spacecraft. At first, I assumed this meant the spacecraft would have to turn 90 degrees to safely grab a sample from L08-E1, like a car pulling in to a parking space. However, in clarifying this with the team, I learned that isn't necessarily the case. The landing areas are simply where the sampler horn can touch; the entire spacecraft doesn't actually have to fit into those. The sampler horn sticks a meter down from the spacecraft, and then there's another 1.25 meter or so of spacecraft between the base of the horn and the solar panels.

The team also says that they can be confident of the spacecraft's position roughly within about 1 meter. Stop and think about that for a moment: Ryugu is 354 million kilometers from Earth. It takes radio signals, traveling at the speed of light, 20 minutes to travel that far. And Hayabusa2 can touch down on Ryugu with an accuracy of a single meter.

Another advantage of L08-E1 is that it's closer to the target marker the spacecraft dropped, just a few meters away, meaning Hayabusa2 can keep it in sight for longer as it descends to collect a sample. The team has decided not to drop another target marker, according to Makoto Yoshikawa, the Hayabusa2 project mission manager.

"Two target markers in the same area can cause trouble for the autonomous operation," he said in an email. "This is a risk. So we have decided not to use extra target makers." 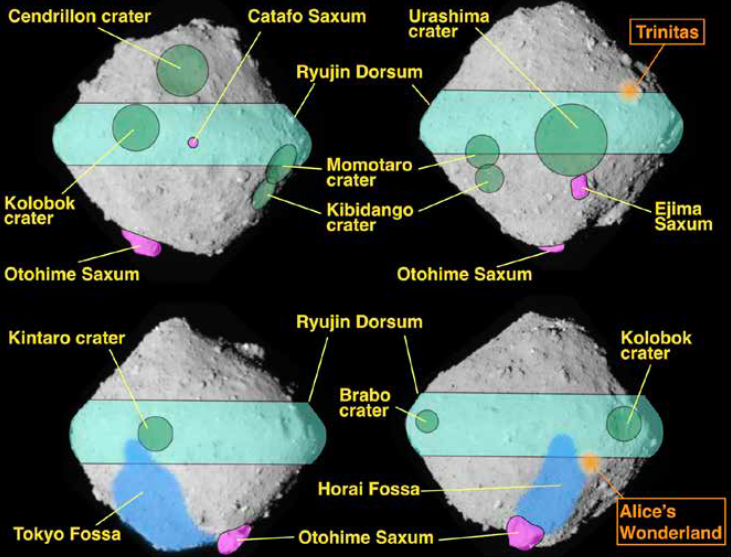 The names in yellow are all officially recognized by the International Astronomical Union, while the two in orange are unofficial. Trinitas and Alice’s Wonderland are nicknames of the MINERVA-II1 and MASCOT landing sites, respectively.

In other mission news, the team has released a map of named Ryugu surface features, with the theme of "children's stories." The names in yellow are all officially recognized by the International Astronomical Union; while the two in orange are unofficial.

Last week's press materials say the Hayabusa2 team submitted their proposal to use the children's-story theme for names to the IAU on 28 June 2018, the day after they arrived at Ryugu. A working group accepted the theme three months later, on 25 September. On 12 October, the team proposed 13 surface feature names along that theme. Nine of those names were accepted as proposed, and 4 were accepted after some further discussion with the IAU.

Perhaps the most notable outcome from these new names is that we can now officially call the giant boulder at Ryugu's south pole Otohime Saxum. "Saxum" is Latin for boulder, and Otohime is the name of an undersea princess connected to the story of Ryugu. That story, as I understand it, says that Ryugu was an underwater dragon palace. A fisherman named Urashima (a newly named Ryugu crater) traveled there on a turtle, where he received a treasure box (read: surface sample) from Otohime!

Here's a good image with Otohime Saxum in it. Note that here, it's at the top of Ryugu—most of the images released by JAXA before September had the south pole on top. 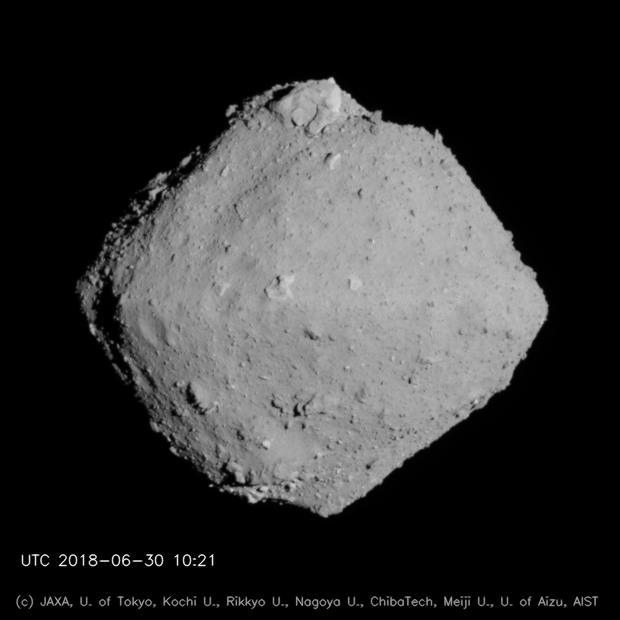 Ryugu as seen by Hayabusa2's Optical Navigation Camera - Telescopic (ONC-T) from a distance of about 20 kilometers. This image was taken at around 19:21 JST on June 30, 2018, and is the reverse side of global view 1.