Japan's Hayabusa2 spacecraft is preparing to spend the rest of 2018 a safe distance from asteroid Ryugu, while the Sun temporarily hinders its communications with Earth.

The spacecraft has been at the kilometer-wide asteroid since late June, snapping pictures, deploying small probes and preparing to collect a sample for return to Earth in 2020. Now, Earth and Ryugu are about to enter conjunction, a month-long period where they are on opposite sides of the Sun from each other. During this timeframe, the Sun's radiation makes communications spotty, so the team plans to stop major work and back Hayabusa2 a safe distance away from the asteroid.

This animation was made using images taken by Hayabusa2's small monitor camera (CAM-H) during a touchdown rehearsal on 25 October 2018. One image was captured every second as the spacecraft ascended from an altitude of 21 meters at a speed of 52 centimeters per second.

In the past month, the spacecraft team at the Japanese Aerospace Exploration Agency, or JAXA, has been busy preparing for a daring descent to collect a sample from the boulder-strewn asteroid early next year. During a touchdown rehearsal between 23 and 25 October, Hayabusa2 crept to 12 meters above the surface and dropped one of five softball-sized reflective target markers that it will use as a guide during sample collection. Each marker contains names and messages collected by JAXA and The Planetary Society in 2013.

"The target marker provides a landmark," said Elizabeth Tasker, a JAXA associate professor, relaying information from Hayabusa2 mission manager Makoto Yoshikawa. "As it reflects light, it’s like a lighthouse on the surface." 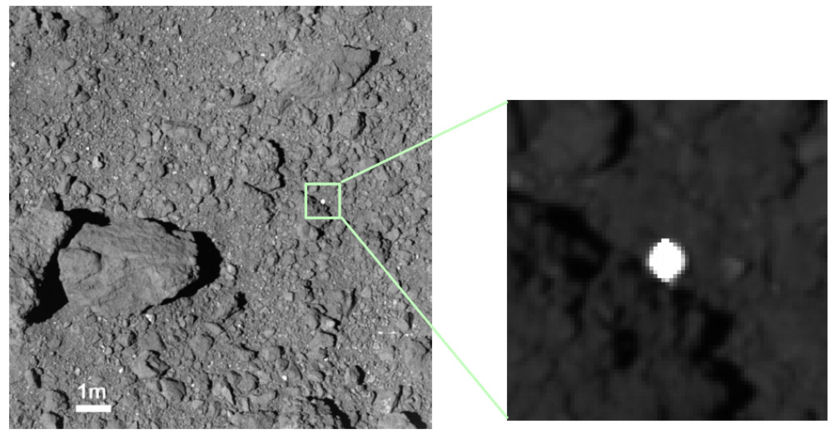 Hayabusa2 spots the target marker it dropped during touchdown rehearsal 2. The image was captured by the Optical Navigation Camera – Telescopic from an altitude of about 100 meters on 25 October 2018 at about 11:50 JST.

Hayabusa2 descends to Ryugu using optical cameras and two laser-based navigation systems. During the touchdown rehearsal, the spacecraft aimed for the 20-meter-wide zone from which it plans to collect a sample — one of the only rock-free regions on the asteroid safe enough for the spacecraft to bring its meter-long sampling arm down to touch the surface.

A later analysis by JAXA showed that during the rehearsal, Hayabusa2 was more than 15 meters from the center of the target landing zone. Had the spacecraft actually been trying to collect a sample, it would have missed, and could have smacked its body or solar arrays off boulders on Ryugu’s surface. 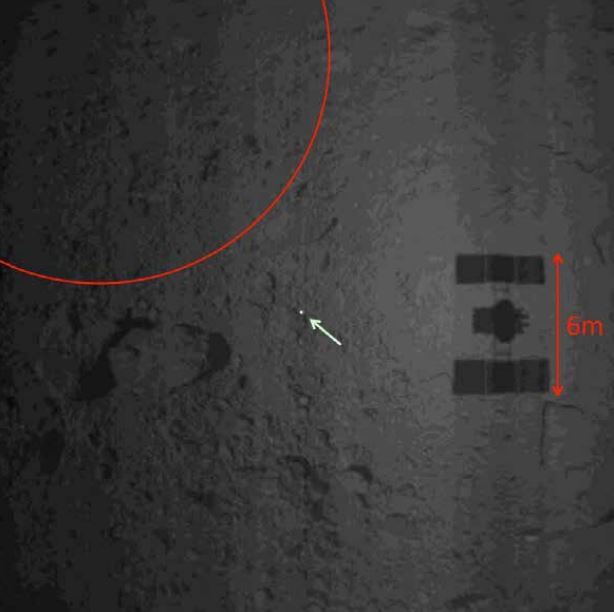 Hayabusa2 spots the target marker it dropped just outside its 20-meter-wide target landing site, L08-B. The landing site is circled in red, and the spacecraft's shadow can be seen. The image was captured from a height of about 20 meters on 25 Oct 2018 at 11:47 JST.

But that’s precisely why Hayabusa2 dropped a target marker during the rehearsal, Tasker said. Subsequent images with and without a strobe light aboard the spacecraft show the marker glinting on the surface near car- and bus-sized rock formations. Now, the spacecraft’s optical cameras can track the target marker and figure out precisely where to land — or, more specifically, where not to land.

"Without that extra landmark, it would be difficult to land within L08-B,” said Tasker, referring to the landing site’s official designation. "But with the target marker whose position is well known, touching down within L08-B shouldn’t be a problem.” 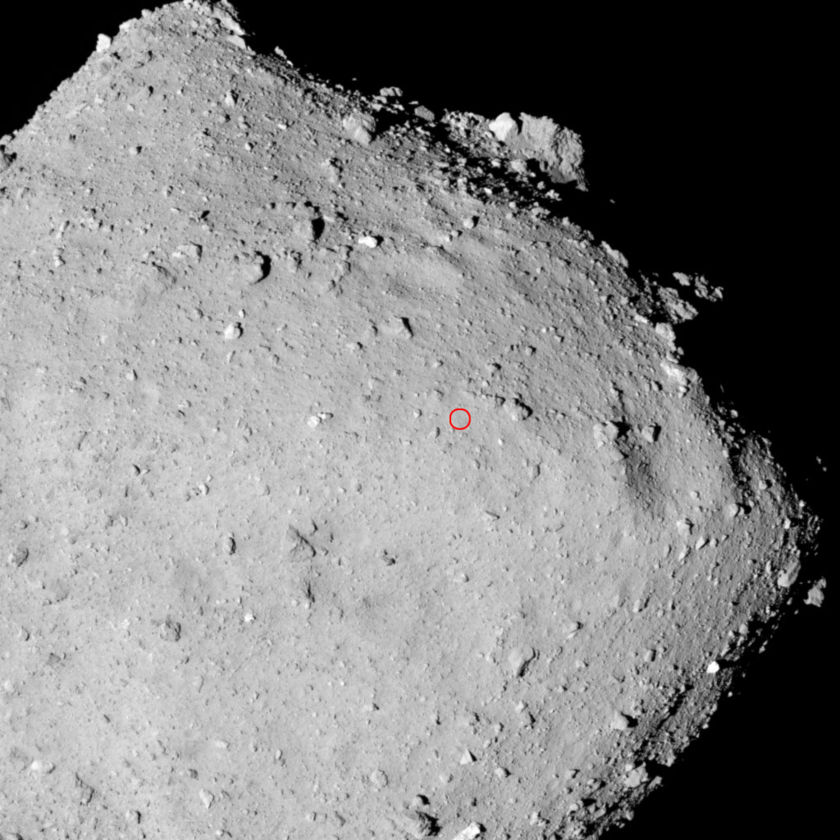 JAXA teams are now analyzing the marker’s location to make sure it will be still be visible to Hayabusa2 when the spacecraft gets down to 5 meters from Ryugu during the sample collection attempt. If the analysis shows the marker might be obscured, mission managers can schedule another touchdown rehearsal and drop a second target marker.

The target marker is the fourth object Hayabusa2 has deposited on Ryugu. In September, the spacecraft deployed two hopping rovers, followed by a lander named MASCOT in October.

Another rover named MINERVA-II2 built by a consortium of Japanese universities is scheduled to be deployed next year, but JAXA officials now say a pre-launch check of the rover revealed potential problems.

"Communication between the rover and spacecraft was fine, but the CPU did not respond," Tasker said. The mission team is now considering various options, including deploying the rover anyway with just a "small possibility" of data being returned.

Hayabusa2 operations for solar conjunction will begin 23 November, when the spacecraft will leave its home position 20 kilometers above Ryugu and embark on a 36-day loop that will carry it away from and back to the asteroid. JAXA press materials show Hayabusa2 will travel about 90 kilometers away from the home position in the direction of the Sun, in a funnel-shaped orbit that returns to Ryugu on 29 December. 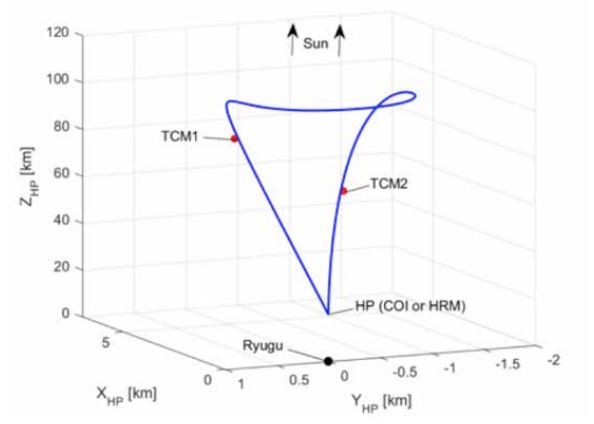 Spacecraft communications will be spottiest between 30 November and 21 December. Ground controllers will attempt to stay in contact with the spacecraft throughout conjunction, saying it is a valuable opportunity to learn more about the environment around the Sun.

Dear Jason. As for that *ascension* GIF. During a press conference on 8th Nov 2018, Yoshikawa sensei the Mission Manager corrected that the frames were actually taken at every FIVE seconds, instead of every one second which was in the initial explanation. You can see the press conference https://www.youtube.com/watch?v=sZrq6NUkqDQ . From 16:10 he starts explaining it. It's also explained at the bottom of page 19 of this document http://fanfun.jaxa.jp/jaxatv/files/20181108_hayabusa2.pdf