Hayabusa2 has touched down on Ryugu!

Japan's Hayabusa2 spacecraft has successfully touched down on the surface of Ryugu! The touchdown happened about 35 minutes earlier than expected, catching even some of the project scientists off-guard. During a live broadcast from JAXA's control room in Sagamihara, cheers suddenly erupted, causing some initial confusion about whether Hayabusa2 had actually touched down. Soon afterward, via a superb Japanese-to-English translator who narrated the broadcast, a JAXA scientist reported, "There was some deviation from the simulation graph, but the results are that everything went according to plan." 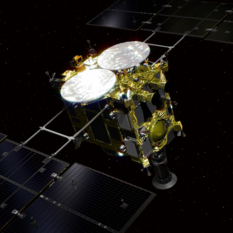 The descent to Ryugu began on 21 February at 4:45 UTC, a delay of about 5 hours later than initially planned. The reason for the delay wasn't clear, but mission controllers made up for lost time by sending Hayabusa2 towards Ryugu at a speed of 90 centimeters per second instead of 40. Around the same time, images from the spacecraft's optical navigation cameras started coming in, and continued to do so until the spacecraft crossed beneath 200 meters shortly after 22:02 UTC. 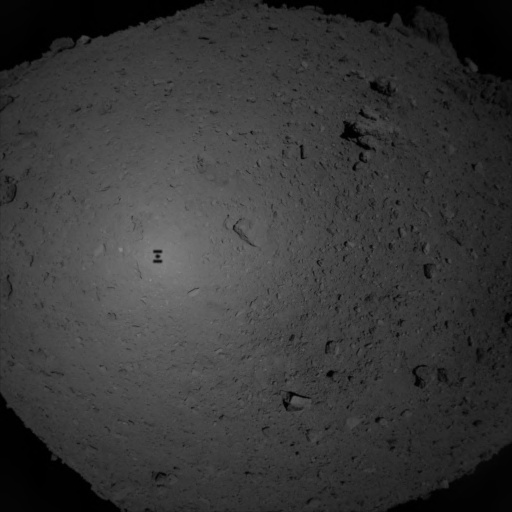 Hayabusa2 took this photo with its optical navigation camera at an altitude of about 180 meters, before it entered its final descent to grab a sample from asteroid Ryugu, on 21 February 2019.

At the 45-meter hold point, Hayabusa2 oriented itself for landing and turned its high-gain antenna away from Earth, shutting off the flow of telemetry in the process. From there, mission controllers could only watch for Doppler shifts in the signal from Hayabusa2's low-gain antenna, indicating the spacecraft had pushed its sample horn into Ryugu and was starting to ascend.

That shift occurred around 22:49 UTC: 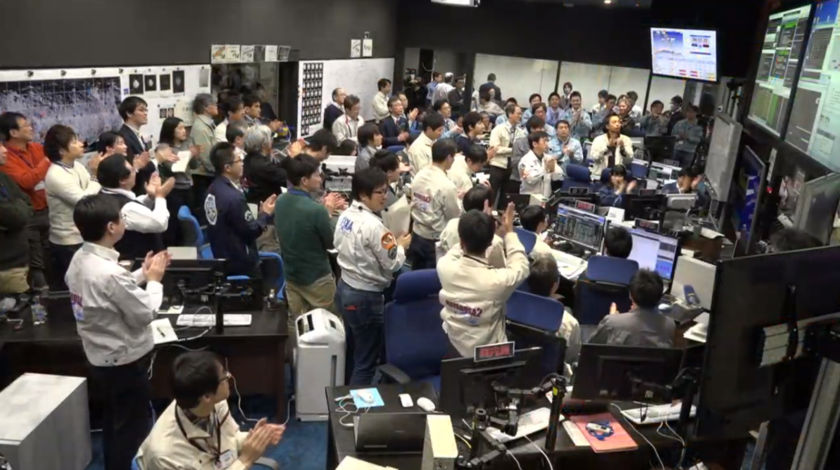 A packed control room celebrates a subtle shift in Hayabusa2's radio signal, marking the moment of its touchdown and sample grab on Ryugu on 21 February 2019 at 22:49 UTC.

Hayabusa2 began to ascend, and just minutes later was able to swing its high-gain antenna back toward Earth. Mission controllers confirmed that the spacecraft was healthy and the command to fire the tantalum bullet executed as expected.

The next step will be for JAXA to download imagery, particularly from the camera on the sample horn, and further confirm the touchdown sequence went as planned. We'll continue to update this article!