Russia may lower its ISS crew complement from three to two

The story appeared in the Russian newspaper Izvestia on Thursday, August 11, and quoted cosmonaut Sergei Krikalev, who serves as the head of piloted space programs for Russia's state-run space corporation, Roscosmos.

"They're exploring the option of going down to two crew on the Russian segment,"said ISS operations integration manager Kenneth Todd, responding to a question from collectSPACE.com editor Robert Pearlman. "We'll look at it as we do with all these kind of things—we'll trade it against whatever risk that might put into the program, first and foremost the risk to our crew onboard, and the station itself."

"From there, we start looking at the options and see what we can do as a partnership to either accomodate it or help them realize why that's a bad thing,"Todd said. "But at this point, it's strictly a proposal that they put on the table and we'll look at it." 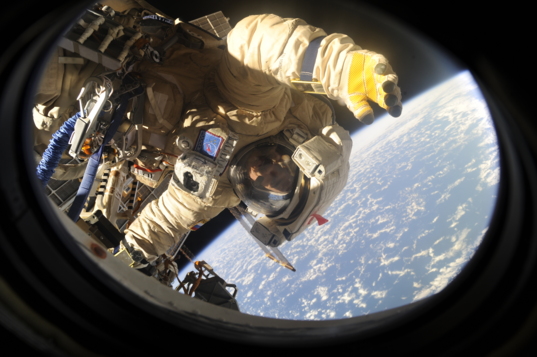 Roscosmos cosmonaut Mikhail Kornienko waves through an ISS window during an August 10, 2015 spacewalk.

Russia's standard crew size has been three since Expedition 23 in 2010. The Izvestia article, citing a previous interview with Sergei Krikalev, said Russia may have originally intended to increase its crew size only after the arrival of its delay-stricken science section, the Multipurpose Laboratory Module.

The MLM is currently expected to arrive no earlier than late 2017, and has a long, complicated history dating back to an original launch date of 2007.

The proposal comes at a time of financial hardship for Roscosmos, which was recently given a ten-year budget of about $20.5 billion—barely more than NASA receives in a single year. Russian economic hardships, caused by falling oil prices and the country’s annexation of Crimea, forced officials to slash the space corporation’s budget by 60 percent, down from a once-proposed top line of $50.4 billion.

At the same time, SpaceX and Boeing are on the verge of transporting NASA astronauts to the ISS, which will end America’s reliance on the Soyuz spacecraft. That will end a lucrative seat-purchasing arrangement for the Russians.

Three-person Soyuz crews currently fly to the station about four times per year. The crew roster typically alternates between two cosmonauts and one NASA astronaut, or one cosmonaut, one NASA astronaut and a third astronaut from another international partner.

After SpaceX and Boeing are flying at full capacity, Roscosmos could, in theory, make just two Soyuz flights per year. Additionally, if international partners begin using American commercial crew vehicles, the third Soyuz seat could be used for cargo, tourists, or other potential international partners—including China.

Russia is currently committed to partnering with the U.S. for the ISS program through 2024.

"One thing that we certainly always keep in the back of our mind is that our Russian partners are committed to the program at least through 2024,"said Todd. "They're no doubt they're keeping that in mind as they work through whatever challenges they have within their system."

Costs are much lower in Russia, different things by different amounts so it's hard to compare. A Proton launch costs just $21.6 million! An Atlas V 551 with similar capability costs about $250 million! So in terms of launches the Russian space budget is similar to NASA's, which is why they launch so often. http://www.russianspaceweb.com/angara-production.html

Costs are much lower in Russia. A proton costs $22 million to launch, while NASA pays about $220 million for an Atlas V 551 with similar capability. So the Russian space budget is similar to NASA's with respect to launchers, that's why the Russians launch so much. Pioneering new technology to build a unique interplanetary space probe, however, is probably almost as expensive in Russia as in the US, so they do that only very rarely. The US pays $70 million per seat on the Soyuz. That's as much as three Proton launches! Space tourists have paid $20-$40 million per seat, like one or two of the 51 years old Proton.