The Government Accountability Office says NASA is generally doing a good job with cost and schedule estimates for its new heavy lift rocket, the Space Launch System. A report released Thursday said NASA’s SLS paperwork "substantially met" five out of six best practices, while a sixth criteria, credibility, had been partially met. But the 32-page audit also cautioned NASA was running short on schedule margin as it works to have SLS ready for flight by November 2018. 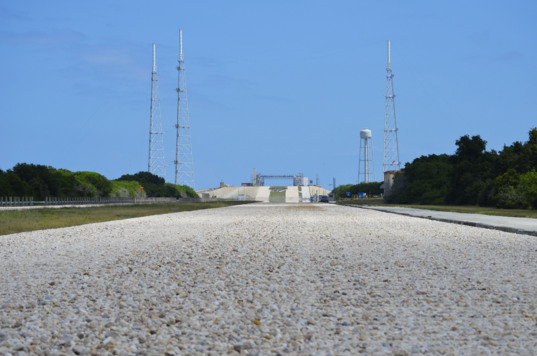 Crawlerway and launch pad 39B

NASA’s tank-like Crawler-Transporter will carry the Space Launch System and Mobile Launcher along this gravel road out to pad 39B, seen in the distance. The pad is surrounded by three lightning towers and a water tower used to supply the sound suppression system.

The GAO report addresses a large swath of SLS topics, from lifecycle costs to contractor reporting systems. The project's price tag through the first flight, Exploration Mission 1, is listed at $9.7 billion. The total cost of SLS, Orion and ground systems development for that same time period—along with an additional Orion spacecraft for EM-2—is $23 billion. The GAO notes this does not include related work under the previous program, Constellation.

Beyond that, NASA has not provided lifecycle costs for SLS, which is expected to evolve from its initial, 70-ton variant into a 130-ton cargo carrier. Two intermediate versions with upgraded boosters and a supercharged upper stage are planned. But other than a vague mandate to send humans to Mars in the 2030s, SLS has no officially scheduled flights beyond EM-2 in 2021 or 2022.

"NASA has stated that cost estimates do not need to cover the program from 'cradle to grave,'" says the report. "Furthermore, NASA has yet to determine the number of launches, their missions, or the operating lifetime for the program, which according to agency officials makes it difficult to estimate the total costs of the program."

NASA, however, considers SLS more of a capability rather than an end-to-end program. SLS, Orion and ground systems are all managed separately through NASA’s Human Exploration and Operations Mission Directorate. The agency is intentionally putting the horse first, hoping Congress will let it pull a cart to Mars one day. Potential future SLS payloads include components of the Asteroid Redirect Mission, as well as a robotic mission to Europa. 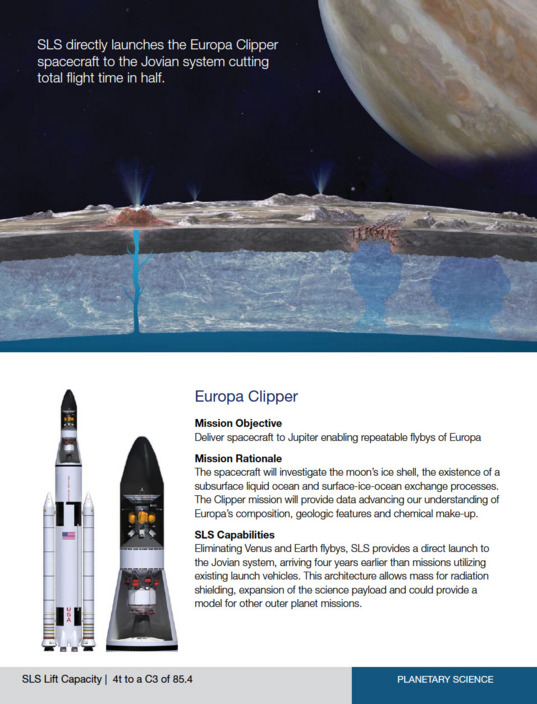 The report stops short of making a specific recommendation to cost out the entire SLS program. It does, however, suggest NASA annually update the rocket’s cost and schedule estimates in the run-up to EM-1, and implement an external contractor costing and reporting system. William Gerstenmaier, NASA’s associate administrator for human spaceflight, concurred with the recommendations.

The latest SLS cost and schedule estimates were completed in 2013. And while NASA received credit for having its Independent Program Assessment Office double-check the SLS math, the GAO said an outside evaluation was also necessary before those estimates could be deemed credible.

EM-1 is slated to fly no later than November 2018, but both SLS and ground systems have set more aggressive internal readiness goals. SLS managers are currently working toward December 2017, says the report, at a reduced cost of $8.4 billion. But that is now expected to slip to July 2018, following a construction glitch at NASA’s Michoud Assembly Facility near New Orleans, Louisiana, where a misalignment on a giant vertical welding machine caused a seven-month delay. The incident highlights how razor-thin NASA’s schedule margin is.

Even if SLS is ready to fly in July 2018, it might have to wait on Orion and ground systems. Though Kennedy Space Center continues to project a readiness date at least two months prior to November 2018, Orion remains a question mark. The spacecraft, which completed its maiden voyage last December, faces two major milestones this year that will further solidify its budget and schedule. The first checkpoint, Key Decision Point C, marks the point where the program officially moves from formulation to development. NASA’s fiscal year 2016 budget request projected KDP-C would occur sometime in April through July.

Just to compare (from what I look up at Wiki) and in terms of potential launch mass to LEO: - 15 tons, Voyager w Titan IIIE. - 18 tons, New Horizons to Pluto w Atlas V 551. - 70 tons, SLS Block I to Europa (possibly). - 130 tons, SLS Block II to Europa (possibly). It would be a really big and fast mission if launched on an SLS. And it would only be to Jupiter which is about half way out to Saturn, not to the edge of the Solar system as Voyager and NH I compare with above. The spacecraft itself should not have to be more expensive than Galileo or Cassini, just long lived thanks to more radiation shielding mass, and with a faster transit. Might beat ESA's already multi-year long JUICE mission under construction on ground. I understand the realists who don't think this will ever fly in any truly useful way, but cost isn't an issue for politicians, it is up to anyone to guess what the individual politicians will think about it in the next several years. But IF it flies to Europa, it could be awesome. An uncrewed mission I think relieves some of the worries about its ability.

An expensive rocket without a clearly defined purpose or vision - that's what "capability" is a euphemism for. The prospect of enabling faster outer solar system missions is the SLS's only redeeming quality at this point, as long as it's understood that the SLS budget will subsidize the increased launch costs and unmanned planetary exploration only has to pay the cost of a regular launch vehicle,

Faster robotic missions to outer solar systems planets might currently be a more appealing application for the Space Launch System as long as President Obama and others keep a rock from an asteroid as the main immediate destination for manned missions with it which would not provide much scientific, resource, strategic or inspirational value. However what are the prospects that leading presidential candidates for the 2016 election or the likely congress would be more open to using the Space Launch System to an immediate goal of manned missions to the surface of the Moon to set up an American led more permanent base there and then to Mars or a faster timeline manned mission to the surface of Mars say in 10 years to set up a base there? I think this would be more inspirational and within the Space Launch System's power capability.

Well, for 20 plus billion dollars you could buy a lot of tonnage to orbit today with any of the launch vehicles. BOTE Ariane 5 200 million per launch, that's a hundred Ariane flights..

I don't understand GAO's obsession with getting a full lifecycle cost. Boeing wouldn't obsess, for example, with a "full lifecycle cost" of a 7x7. In Boeing's case, if there are more customers, keep building more. In SLS's case, if the capability is still being used and missions are in progress, then keep building more. What would the "total lifetime cost" of Soyuz be? I doubt it would ever have flown if opponents could have wielded such an enormous cost figure against it. The return on investment, however, has been wonderful. My cynical suspicion is that GAO is fishing for a shock number. Even worse, that they want to drive NASA toward the idiocy of DOD big-ticket projects. That's where DOD estimates they want say 1000 of some item for, say, $1.1 trillion over the lifecycle. That shocks and horrifies Congress, so they whittle it down to maybe 200 items for only $800 billion, and they brag about saving the country money, while the deficit hawks wring their hands about how the unit cost has risen so obscenely much, and everybody is angry and convinced government is broken. It IS broken, but I don't think GAO or Congress acknowledges their share of the blame for how this plays out, again and again. Why on earth would GAO want to impose this horribly broken model onto SLS? The relevant questions, for people who honestly want good government and good return on the taxpayer's dollar, are how much are the fixed annual costs for the program, and what are the unit costs per number built and at various build rates. Then, balanced against that, what capability is that buying and what are the opportunity costs--could we get more done if we spent the money in a different way. The other problem with life-cycle cost obsession is it encourages disposable programs. Build a space station, use it X years, throw it away. Build X number of SLS rockets, use them, throw SLS away and design an entirely new rocket. Refactor instead.

Re economical efficiency, SLS is likely oversized. A 50 mt LEO Block II design had been a better investment. (I think an efficiency estimate, as well as an estimate of cost ceiling, is what the lifecycle analysis provides. Dunno if that is better or worse than an instantaneous estimate, as matt suggests. The latter is less constrained, for better or for worse.) @doug: "a rock from an asteroid as the main immediate destination for manned missions ... would not provide much scientific, resource, strategic or inspirational value". It would evolve and verify Orion for trans-lunar operations. The Moon is a good target by itself, but not as a stepping stone for Mars encounters and later Mars moon exploration. If going to Mars is not enough inspiration, I don't know what is. (On the other hand describing ARM as not directly related to evolving martian encounter/moon exploration capability is possibly harmful to public, as well as NASA, inspiration.)

@Torbjorn The Apollo mission also went into lunar orbit and then landed on the Moon with the lunar module and then docked again with the command module. Why couldn't docking for Mars be practiced together with a landing module on the Moon. That might be the plan for this docking with a rock from an asteroid to develop into a Mars mission but it is a long time until 2039 when President Obama has scheduled a manned Mars landing and at least the last 20 years has shown that many of the US presidents scrap the previous president's deep space mission and start from scratch and then have nothing to show for the previous work if they didn't get anywhere significant. Robert Zubrin has a much better timeline of about 10 years to get to the surface of Mars on a fairly economical basis including living off the land and having a rotating space craft where astronauts wouldn't have to worry about muscle loss, bone loss, anemia, some eye problems etc. that are associated with microgravity. Although it is true going to the surface of the Moon would take some time and focus there would be a lot more resources on the Moon that a rock from an asteroid including for rocket fuel and lesser gravity than on Earth. Also would the Moon's gravity of about 1/6 that of Earth be better preparation for landing and setting up a manned base on Mars that has about 1/3 of Earth's gravity than docking with a rock from an asteroid that has almost no gravity. Describing ARM as not directly related to developing martian encounter/moon exploration might be harmful to President Obama and current NASA director Charlie Bolden's focus on manned asteroid exploration but I heard many scientists are supportive of focus on the Moon more than the ARM and there is an article questioning ARM in Science News which I have a subscription to. Questioning ARM might help the US from getting bogged down on only exploring a rock from an asteroid and preparing for a trip to a moon of Mars more than larger bodies.