Update, June 9: The team made more progress this morning downloading LightSail's post-deployment image, but due to unfavorable communications during a few ground station passes, the image has not yet been completed.

In the meantime, here's a processed version of yesterday's partial image by Emily Lakdawalla: 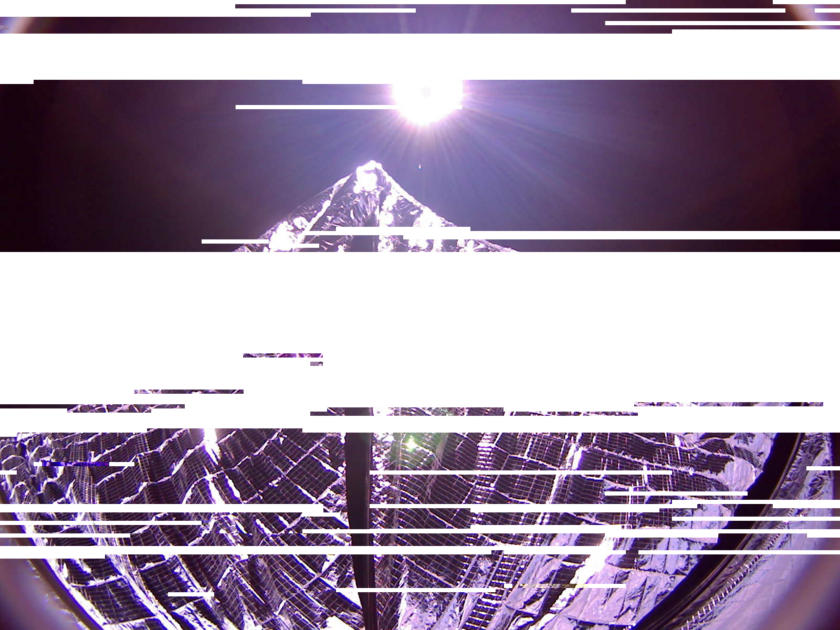 Updated version processed by Emily Lakdawalla: This partially downloaded image of LightSail's deployed solar sails was captured by one of the spacecraft's onboard cameras on June 8, 2015. The scrambling and grey area are artifacts of the partially downloaded image; the final product will be full frame and properly arranged. The image is expected to be completed over the course of the spacecraft's future ground station overflights.

It’s official: The sails are out.

This afternoon, LightSail mission controllers downlinked a partial image of the spacecraft’s solar sails in space. The scene, which is scrambled and partially blank because the entire image has not been downloaded, was captured during a Cal Poly San Luis Obispo overflight today at about 12:11 p.m. EDT (16:11 UTC). At the time, LightSail was over the coast of British Columbia, Canada, about 530 kilometers northwest of Vancouver. 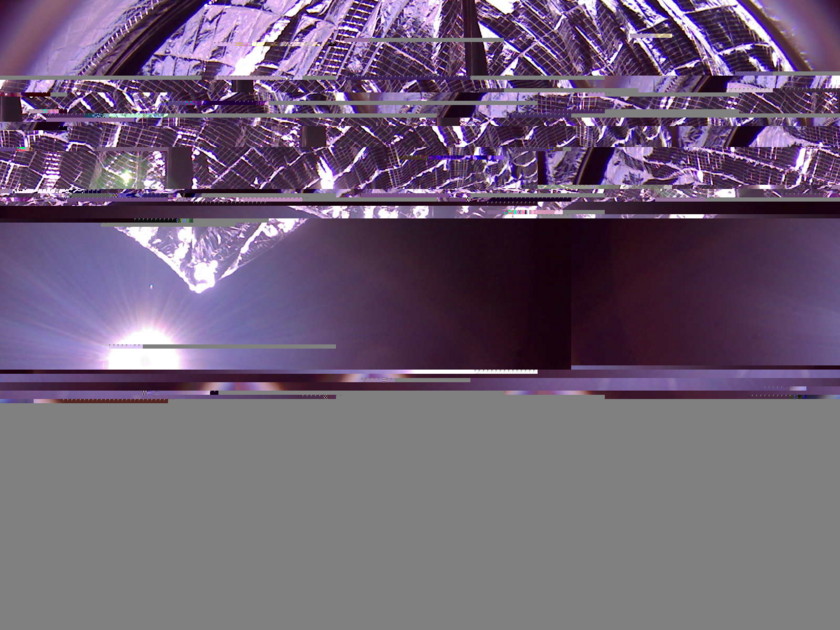 This partially downloaded image of LightSail's deployed solar sails was captured by one of the spacecraft's onboard cameras on June 8, 2015. The scrambling and grey area are artifacts of the partially downloaded image; the final product will be full frame and properly arranged. The image is expected to be completed early June 9 during the spacecraft's next ground station overflight.

Earlier in the day, ground controllers downloaded two pictures taken by LightSail's cameras during the sail deployment sequence on June 7. When the pictures were assembled, however, they didn’t contain usable image data. A meeting was convened that included representatives from The Aerospace Corporation, LightSail’s original camera manufacturer. Mission managers decided to command the cameras to capture a fresh set of images.

During the final ground station overflight of the day, one of the new images was partially downloaded and assembled. When more data is downlinked tomorrow morning, the image will be complete. Here's what an onboard camera image looks like with the sails completely unfurled: 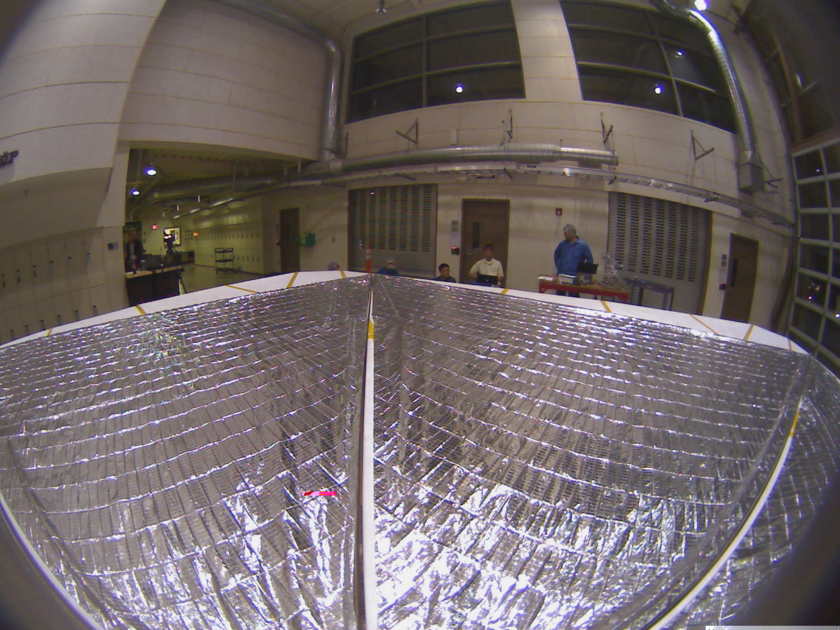 This image was captured by one of LightSail's onboard cameras during the spacecraft's day-in-the-life test at Cal Poly San Luis Obispo in September 2014.

Because LightSail’s orbit is already beginning to deteriorate, the engineering team will convene at 4 a.m. EDT tomorrow to plan the day’s actitivies, based on the contents of the completed sail image. If the sail is not completely tensioned, the booms will be “walked out” incrementally, providing important motor count data in preparation for the second flight in 2016. A similar procedure was used to tension the sail during lab tests.

NASA and The Planetary Society are sharing data on the LightSail mission through a Space Act Agreement. In 2018, the space agency is preparing to launch two of its own solar sail-powered CubeSats: Lunar Flashlight and NEA Scout. Early this morning, a team at NASA's Marshall Space Flight Center in Huntsville, Alabama captured this video of LightSail soaring across the sky with its solar sails deployed:

LightSail sails across the sky

The observation was used to create a light curve. With a brightness peaking just above magnitude 4.8, LightSail will be difficult to spot with the naked eye at many locations. 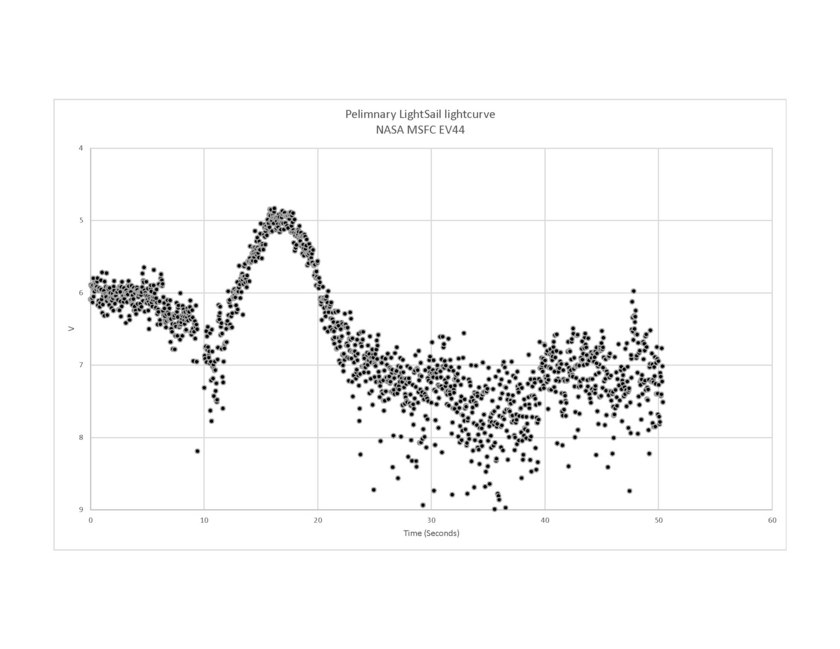 Y E S ! ! ! Another milestone in R&D achieved! Congratulations to the team! We are learning!

How cool is this....wow. :D Even with the partial image, it's just beautiful.

Fantastic, everything! Wonderful work, thanks to everyone involved from the mere but inspired mortals! Is the orbit deteriorating according to schedule? I'm not sure from when this was counted [on], from sail deployment or from reaching orbit. It's been changing altitude quite often and rapidly - forgive me if this sounds like another duh-remark, but I'm not an engineer, and compared with other extremities up there...

I'm looking at the video from Marshall, with tears in my eyes. *We* did that!!

Fantastic! How about a map so I'll know when its over head?

Thanks for this article. I saw a diamond shaped object pass directly over my house in Lubbock, TX at 922 pm CDT Sunday June 7th moving from sse-nnw - about 20 minutes after sunset. It reflected reddish-black until directly overhead, then the reflection dissipated. I had been searching for an explanation until this. Questions answered.