There have been a few "new developments" on NASA's astronomy and astrophysics front.

I put this understatement-of-a-phrase in quotes because that's exactly what was used in the titles of two presentations given this week by the National Academies' Committee on Astronomy and Astrophysics. The presentations -- "New Developments in Astronomy and Astrophysics," by NASA Science Mission Directorate Associate Administrator Paul Hertz, and "Implication of New Developments for the Astronomy and Astrophysics Decadal Survey," by Alan Dressler of the Observatories of the Carnegie Institute -- dropped a whopping revelation. The National Reconnaissance Office, America's intelligence agency for space-based surveillance, has donated two, partially-completed space telescopes to NASA.

Where did they come from?

According to Paul Hertz, the telescopes are currently sitting quietly in a clean room at ITT Exelis in Rochester, New York. Exelis is a big player in aerospace defense. To give you an idea of just how big, consider that the company claims its technology has been aboard every GPS satellite put into orbit.

Speculation about the the telescopes' origin immediately focused on a National Reconnaissance Office satellite surveillance program called "Keyhole." The NRO launched the first Keyhole satellite in 1976, according to a 2009 article by Dwayne Day for The Space Review.

The story is thought to go something like this (since we're dealing with classified information, nothing can be said with absolute certainty): at the time of Day's article, fourteen Keyholes were believed to have been launched in four increasingly-sophisticated types, called "blocks." A fifteenth Keyhole was apparently sent into orbit via NROL-49, launched in January 2011.

In 1998, the U.S. government put out a call for proposals to replace the Keyholes with a new, sophisticated program called "Future Image Architecture." Although Lockheed Martin was the biggest player in satellite surveillance at the time, Boeing won the bid in a surprise upset.

But a funny thing happened on the way to the launch pad. According to a 2007 New York Times investigation, Boeing's proposal was too ambitious and severely underfunded from day one. As one former CIA official said in the article, "Writing winning proposals is different from building winning hardware." Boeing's role in the optical portion of FIA was revoked in 2005. Estimates on the cost of the failed project reached $18 billion.

So, are these two NRO 'scopes relics from the FIA debacle? While possible, two pieces of evidence suggest they came from the Keyhole program. The first indication comes from the Committee on Astronomy and Astrophysics presentations: the telescopes have actuated, or movable, secondary mirrors. That's an alleged feature of some of the Keyhole satellites; the mirrors could be moved to provide a variety of focal options. 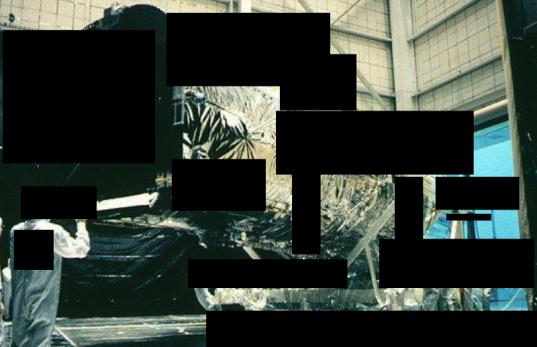 A highly-redacted picture of one of the telescopes donated to NASA by the National Reconnaissance Office. UPDATE 6/7/12: It appears Alan Dressler put this in his presentation as a joke. It's actually this photo of HST: http://goo.gl/QZzYz

Secondly, NRO spokesperson Loretta DeSio confirmed to the Washington Post that the NRO telescopes are very Hubble-esque. That description matches the rumored design of earlier Keyhole satellites. According to a book by Andrew J. Dunar and Stephen P. Waring called The Power to Explore, early proposals for the Hubble suggested a 3-meter diameter mirror until it was realized the shuttle's payload bay could not accommodate a telescope of that size. Chapter twelve (available from MSFC as a PDF) says a mirror size of 2.4 meters was eventually chosen because it would be the same size as comparable spy satellites, thus saving on production costs. The NRO telescopes given to NASA indeed have 2.4-meter mirrors.

So, if these are Keyhole telescopes, why aren't they in space? The NRO also revealed to the Washington Post that the telescopes were manufactured in the late 1990s and early 2000s. The Space Review's aforementioned article indicates the last Block III Keyhole, USA-129, was launched on December 20, 1996. The NRO sought their FIA proposals in 1998, and the next Keyhole -- a new Block IV version -- didn't fly until 2001. This implies that these *might* be Block III Keyholes that weren't needed when the Block IV series started flying around the time of the FIA fiasco.

Or, they could indeed be FIA leftovers. Or neither. The exact circumstances in which the NRO came to have two surplus, partially-constructed space telescopes while NASA continued to struggle for science funding may forever remain a mystery.

What's under the hood?

Now that we know (or don't know) where they came from, let's take a look at the NRO telescopes. As mentioned before, they have 2.4-meter mirrors, just like the HST. Where they differ from Hubble, however, is their focal lengths. Hubble has a focal length of 57.6 meters, giving it a focal ratio of f/24. The NRO 'scopes have focal lengths of 19.2 meters, giving them focal ratios of f/8. Matt Mountain, director of the Space Telescope Science Institute, called them "stubby Hubbles."

The shorter focal length gives the NRO telescopes a much wider field of view. Alan Dressler's CAA presentation gives some theoretical numbers if the telescopes were used as-is and outfitted with sixteen Hawaii-4RG detectors from Teledyne. He compares the result with the infrared channel on Hubble's Wide Field and Planetary Camera (WFC3). I took some of Dressler's numbers and lined them up with an excerpt from a Hubble instrument chart by Emily Lakdawalla to come up with the resulting table:

Dressler's presentation says that this theoretical setup would result in a field of view a magnitude of one hundred times larger than that of Hubble's WFC3. Hertz and Dressler use the WFC3 as a comparison point because the NRO telescopes would be ideally suited to perform large-scale infrared observations, a key goal of WFIRST (more on that next). However, the comparison exercise is conjectural because the telescopes don't currently have detectors at all. For that matter, they lack star trackers, prism wheels, filters and the other components required for an operational space telescope.

What they do have, however, are bodies, mirrors and a payload radiator. They also have nice long struts on the bottom that provide a roomy 1.5 meters of available space for spacecraft instruments.

What will we do with them, and how soon?

NASA has already given some thought on what science objectives the hand-me-down telescopes could be used to accomplish. Both Hertz and Dressler suggest using them to fulfill the goals of WFIRST, the Wide-Field Infrared Survey Telescope. WFIRST has four main science objectives:

That's a pretty impressive set of cosmology, astronomy and astrophysics goals. Dressler's presentation indicates one of the NRO telescopes could likely accomplish the objectives of WFIRST, with an added bonus: the original WFIRST proposals called for 1.1 or 1.3-meter, unobstructed mirror. Even considering the NRO telescopes' 9% obstruction due to the secondary mirror, a 2.4-meter telescope would be a big improvement.

WFIRST originally had a scheduled launch date of 2020. But with the James Webb Space Telescope currently taking a large share of funding, estimates for the launch have slipped as far as 2025, according to a January article by SpacePolicyOnline.com. If NASA decides to use one of the NRO telescopes for WFIRST, that could theoretically be accelerated. However, as Paul Hertz stressed in his presentation, there is currently no funding -- and therefore, no mission -- to take advantage of the hardware gift.

Additionally, the WFIRST design called for the telescope to be placed in orbit around the second Lagrangian point -- similar to the James Webb Space Telescope -- where radiation from the Earth and Sun comes from a uniform direction. The NRO telescope's active control system and payload radiator may be able to compensate for that radiation, allowing the mission to operate from a geosynchronous orbit. This would give the added benefit of improved data transmission rates to Earth, but the idea requires further study. 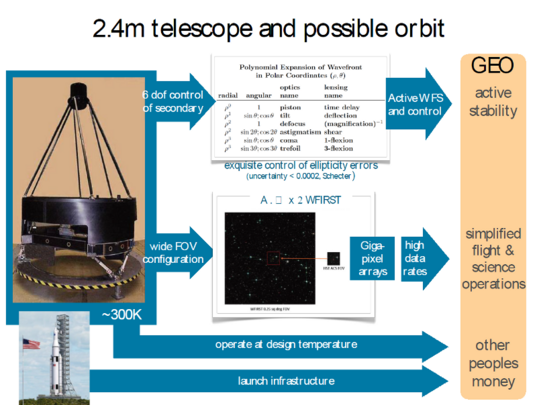 This slide from Alan Dressler's recent National Academies' Committee on Astronomy and Astrophysics presentation shows a dynamic test unit similar to the donated NRO telescopes, a field of view comparison with the Hubble WFC3, and some paramters for a geosynchronous orbit. Additionally, Dressler shows the Space Launch System as the launch vehicle (although the SLS is not currently slated for such a mission).

In the aforementioned New York Times article, NASA acting deputy director for astrophysics Michael Moore said that the NRO hardware could shave as much as $250 million from WFIRST's $1.5 billion budget. First, NASA must find the funding to start the mission. The space agency will have to pay $100,000 per year to store the new telescopes in a clean room, but the donation is still quite a bargain.

So the DoD can afford two telescopes it doesn't need, while NASA can't even afford one that it does? Does not seem fair.

Please note that the "redacted" photo is actually a fake. See: http://nasawatch.com/archives/2012/06/nasas-two-new-s.html

Thanks, Casey! I found the original here: http://www.sciencephoto.com/media/323298/enlarge Looks like I fell for Dressler's joke.

Great article! The photo makes you want to jump back in time and fixed the flawed mirror.