China is planning a Voyager-like mission to the outer solar system that includes a flyby of Neptune, measurements of the electrically charged gas bubble surrounding our solar system, and a journey to interstellar space.

The mission is currently named IHP, which stands for Interstellar Heliosphere Probe. It consists of two spacecraft that would explore the heliosphere, the solar-wind-created region around our Sun that separates us from interstellar space as the solar system travels through the Milky Way.

Zong Qiugang, the director of the Institute of Space Physics and Applied Technology at Peking University in China, said the mission “will allow us to discover, explore, and understand fundamental astrophysical processes in the largest plasma laboratory—the heliosphere.” Zong gave an overview of the mission at EPSC-DPS 2019, an international gathering of planetary scientists in Geneva, Switzerland.

The first spacecraft, IHP-1, would launch towards the head of the heliosphere in 2024. A second probe, IHP-2, would go in the opposite direction to explore the tail. The heliosphere is hypothesized to resemble a comet’s tail, but whether or not the tail “closes” behind the Sun is an open question. The Voyagers exited the heliosphere on the head side, and the tail has never been explored. 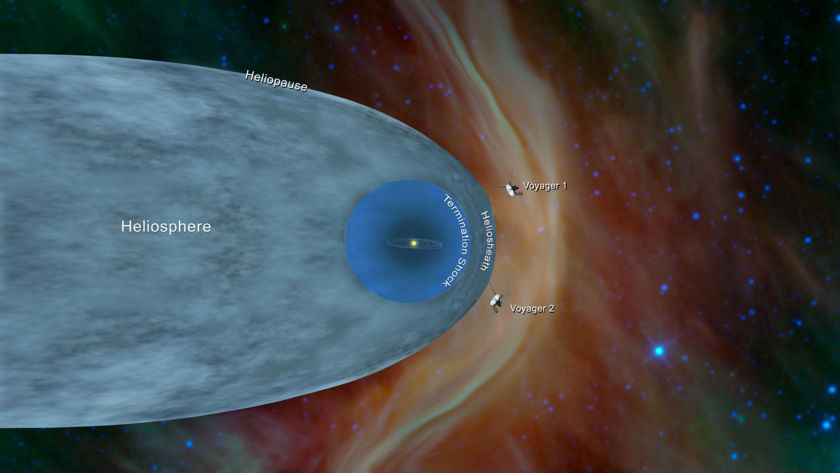 The IHP spacecraft will carry magnetometers, energetic neutral atom and particle payloads, dust and plasma detectors, and optical cameras. Phenomena of particular interest to the mission include Anomalous Cosmic Rays. These are slower versions of galactic cosmic rays from the local interstellar medium that become ionized once inside the heliosphere. The mechanism behind this process is not understood, and studying the ACRs could provide insights into the heliosphere and the nature of interstellar material itself.

The “hydrogen wall,”  where interstellar material interacts with the edge of the heliosphere, is also of interest. As a structure that can be observed around other stars as well as our own, studying the hydrogen wall will aid the understanding of physical processes in the heliosphere and inform models of other stellar systems.

Getting to the Heliosphere

Before IHP-1 and 2 can explore the far reaches of the solar system, they will use flybys of Earth and Jupiter to gain speed. IHP-1 would fly past Earth in 2025 and 2027, and then Jupiter in 2029. It would reach the heliosphere around 2049. 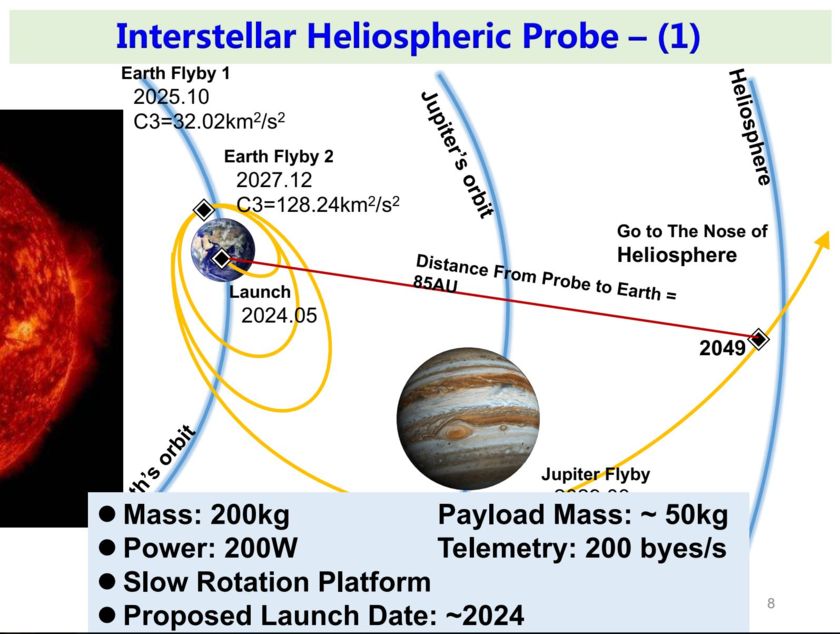 This slide, presented by Zong Quigang at EPSC-DPS 2019, shows a basic mission plan for IHP-1.

IHP-2 would have additional targets. After a flyby of Jupiter in 2033, it would set course for Neptune, making the second-ever visit to the ice giant in 2038. The spacecraft would release a smaller probe shortly before arrival at Neptune, and observe the impact as the probe plunges into the atmosphere. 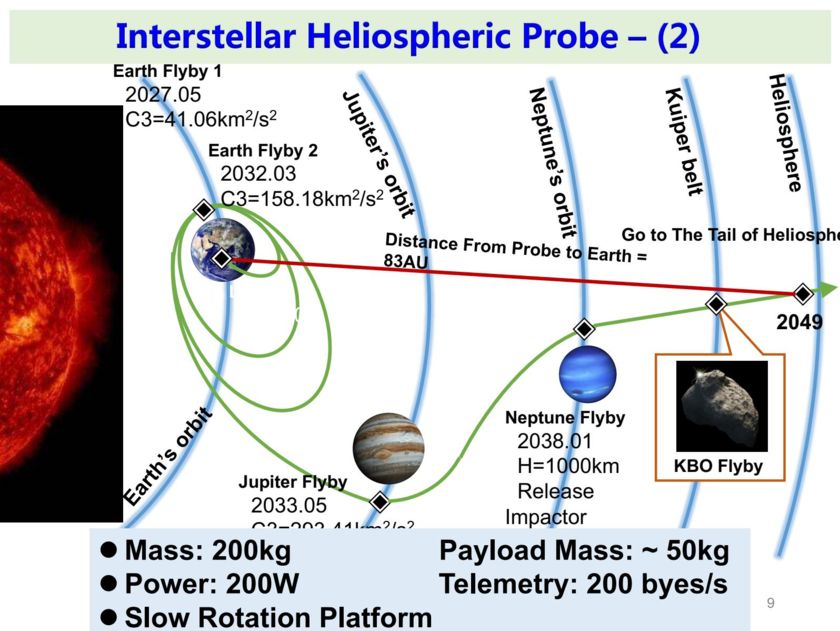 This slide, presented by Zong Quigang at EPSC-DPS 2019, shows a basic mission plan for IHP-2.

Neptune has only been visited once, by Voyager 2 in 1989. The flyby revealed a frigid world with supersonic winds and a mysterious dark spot. Incredibly, Voyager 1 and 2, launched 16 days apart in 1977, are now around 22 and 18 billion kilometers away respectively in interstellar space and still communicating with Earth. Together with the derelict Pioneers 10 and 11 and the more recent, active New Horizons, they are they only objects that will leave or have already left the solar system.

Unlike Voyager 2, which made use of a rare planetary alignment to visit all four outer planets, HP-2 would not be able to visit Saturn or Uranus. However, IHP-2 would follow up its Neptunian appointment by targeting a potential Kuiper Belt Object to learn more about primitive solar system objects. It would then continue on its way toward the tail of the heliopause. 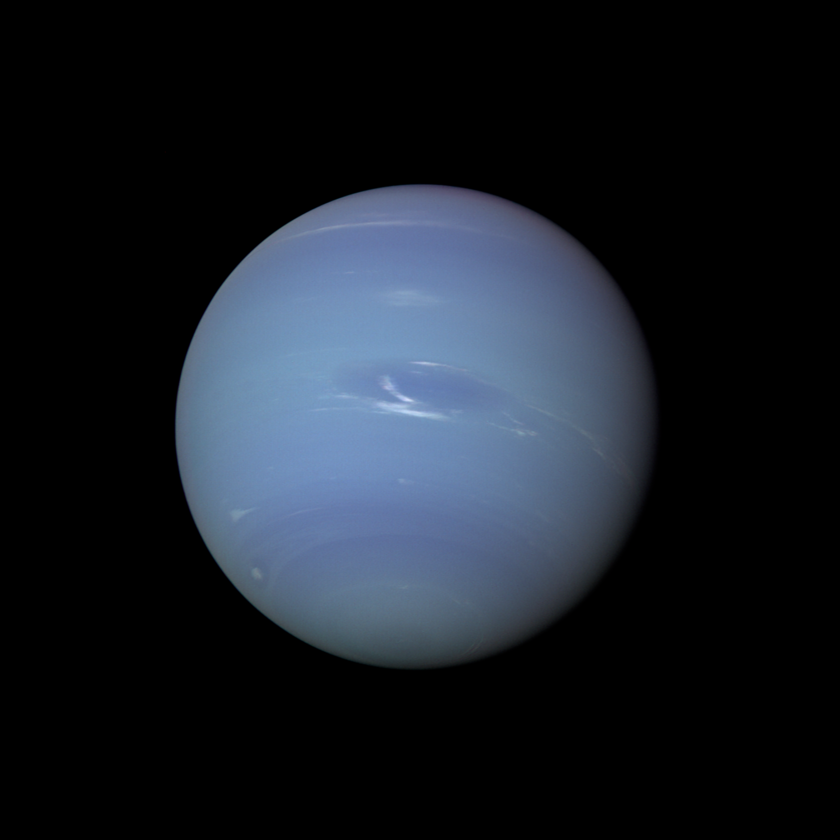 Voyager 2 Narrow Angle Camera image of Neptune taken on August 20, 1989 as the spacecraft approached the planet for a flyby on August 25. The Great Dark Spot, flanked by cirrus clouds, is at center. A smaller dark storm, Dark Spot Jr., is rotating into view at bottom left. Additionally, a patch of white cirrus clouds to its north, named "Scooter" for its rapid motion relative to other features, is visible.

The IHP concept has not been formally approved but feasibility studies have long been underway. The formal go-ahead could be granted in 2021 or 2022, with the formation of the next Chinese Five Year Plan. Mission proposers have also noted that the IHP spacecraft would reach a distance of about 100 AU from Earth by 2049, in order to mark the 100th anniversary of the founding of the People’s Republic of China.

Scientists at the Johns Hopkins University Applied Physics Lab are also studying an interstellar mission called Interstellar Probe that would launch before 2030. Trident, a proposed NASA Discovery mission, would make use of the same Jupiter-Neptune alignment as IHP-2, in order to study Neptune and its moon Triton.

It's weird that a country doing such horrible things on human rights could be doing such wonderful things in space at the same time. Do it China! Less money on concentration camps and subverting democracy in Hong Kong, and more money on inspirational science in space.

Good luck China! That's a very ambitious plan you have. Unfortuantely at my age I most likely won't be alive to see it but i have a small chance based on family longevity to see it. I hope I do though! As for the politics, I knew a Chinese guy who lives there. He explained that the older generation are the large majority and they like the communist rule because they feel safer than they have before. The numbers wanting democracy are the small minority. It would be good for Chinese politics to just let these people leave and that would give them stability.

The politics of China is this: Mao and the communist party took over in 1949. A number of "auto-genocides" took place between then and 1976, in which tens of millions were murdered or starved to death (the 'great leap forward' in 1958, most notably, was extremely lethal). In 1989 there was a "Chinese spring" that was brutally put down in the Tienniman square massacre (five thousand people gunned down in a day). There was brutal repression since. Now back to the joys of space exploration.

It is a shock to me that the readers are interested on deep space explorations, but they are so narrow-minded by the different political systems existing on this blue dot. The Planetary Society is not the right place to argue about political problems, although of course you have the right of making free speech. Narrow minds of human beings are THE most serious virus on this planet. It is pretty awkward that you have a persisted and blind sense of superiority by criticizing China. You do not allow free propagation of muslin to the USA, but pretend to care about "labor camps" in China that actually prevent the threaten of terrorism; you ignore the suffer of American Indians that were systematically murdered by your ancestors and the selective inattention of slaughtered civilians at Iraq and many other nations by the US-assisted bombs, but you pretend to care about human rights "hurt by" Chinese government; you laughed at the Chinese government when they were trying hard to fight against the covid-19 by performing strict quarantine, but you do not gather and march on street appealing for your freedom when you are doing the same thing..... Fold your superiority! This is a small blue dot that allows the existence of different political systems.