Missions to the Moon and Mars will dominate China's focus

China has just released a new white paper on its policy and activities in space, outlining ambitious deep space exploration, human spaceflight and space science projects as major priorities for the years up to 2020 and beyond.

The 11,000-word government paper, titled “China's Space Activities in 2016,” details the major achievements of the past five years, plans for the next five, and reiterates commitments to international cooperation, and the long term development of its space industry.

There’s a lot going on in this comprehensive document but, after a quick look at recent progress, it’s definitely worth focusing on China’s deep space exploration plans. 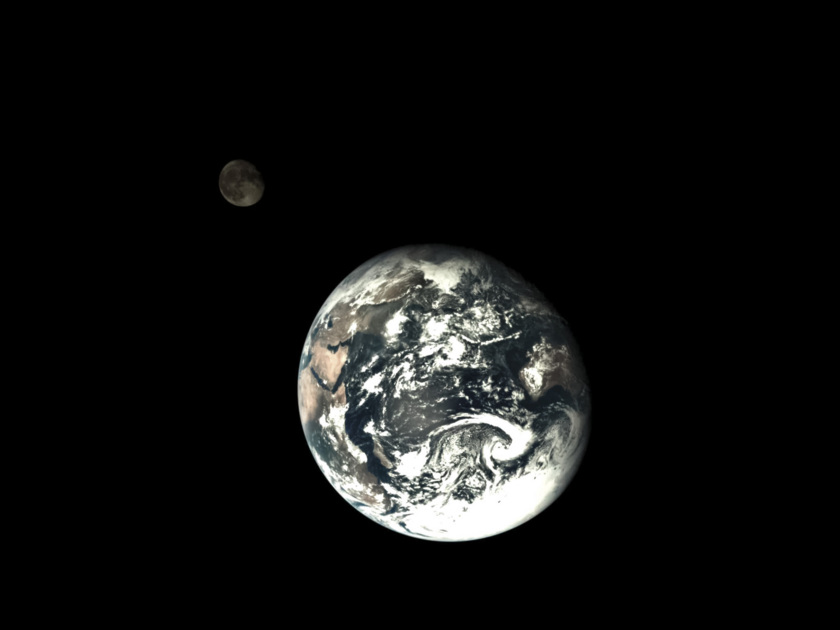 The Chang'e 5 test vehicle service module took this photo of Earth and the Moon together on November 9, a week after successfully returning the sample capsule. The Moon's surface is quite dark compared to Earth's bright clouds.

Some of the achievements listed from the past year alone are impressive, including the successful debut of the heavy-lift Long March 5 (think China’s own Delta-IV Heavy), a new coastal launch site, and some cutting-edge space science missions, including a quantum science satellite and dark matter-hunting probe. China also took another step towards establishing a space station with the launch of the Tiangong-2 space lab and its first medium-term human stay in space with Jing Haipeng and Chen Dong as part of the Shenzhou-11 mission.

But what’s in store for the future is what’s really attention-grabbing. We already know of some of these: Chang’e-5, the first lunar sample return mission by any country since the 1970s, probably lifting off in late 2017, followed a year later by an unprecedented landing on the far side of the Moon. Summer 2020 will see the launch of the country’s first independent interplanetary mission, to Mars, which boldly combines an orbiter, lander and rover in one shot.

But these plans have now officially been expanded. Wu Yanhua, vice head of China National Space Administration (CNSA), stated at today’s press conference in Beijing that it will, “also carry out robotic exploration of the south and north poles of the moon twice in the next five and ten years”.

Stated in the text is a plan to attempt to collect and return samples from Mars around 2030. If so, China may actually beat NASA to achieving the type of mission that could have a profound impact on science and human history, depending on its findings.

Moving further out into the solar system, “exploration of the Jupiter system and planet fly-by exploration”, are other stated goals, while “related projects will be implemented to conduct research into major scientific questions such as the origin and evolution of the solar system, and search for extraterrestrial life.”

These projects were included in a 20 year plan for lunar and deep space exploration under development during the autumn, which has now apparently gained official approval.

Facilitating some of these projects will be a Saturn-V class super-heavy lift rocket, the Long March 9, the development of which will now officially be activated in the next five years. Needless to say, this is exactly the kind of launch vehicle needed to take Chinese astronauts to Moon. China is not ready to declare this goal openly however, saying only that they are, “studying the feasibility of the related [human landing] plans”. But this, coupled with the not-mentioned test of a scale next generation space capsule in June on the Long March 7, leaves little doubt as to Chinese eventual lunar desires.

Some other notable projects and developments mentioned in the white paper, each worthy of serious attention, include:

Beyond these, there are some general takeaways and caveats to China’s fourth space white paper.

First, it can be welcomed as giving a measure of transparency to a largely closed program and a sense of China’s progress and direction in space. However it doesn’t provide much information on government and military actors involved, nor the policy-making process.

The paper includes a section on China’s “Purposes, Vision and Principles”, which essentially outlines the country’s policy toward space. This states the country aims to: “enhance understanding of the Earth and the cosmos,” and “utilize outer space for peaceful purposes,” but, at the same time use space to, “protect China's national rights and interests, and build up its national comprehensive strength.”

But it does not discuss the security aspects, such as suspected non-destructive anti-satellite missile tests in past few years, nor the issue of the ‘dual-use’ nature of space technology, which means it can often be used for both civilian and military purposes. China’s Beidou navigation constellation for example can, just as with the US counterpart GPS, be used for transport, communications and other everyday uses, but also boost the operational capabilities of the country’s armed forces. These developments and capabilities certainly have a range of ramifications for other countries, especially the United States.

One key point is that China clearly sees space as having a major role in the development of the country, so as to "meet the demands of economic, scientific and technological development, national security and social progress.” It is understood that before launching into complex and challenging space sectors, Beijing assessed the US Apollo program benefits – such as technological development, spin-offs, soft power, and education – and decided firmly to commit the effort and resources. This long term approach is now apparently paying off.

It is well worth a glance at this document to get an idea of many of the things China is up to in space. Though it still lags significantly behind the capabilities of the United States, China now has a comprehensive and serious space program, and one that should not, as in the past, be easily dismissed as merely for prestige or mainly military in nature, nor should it be seen simply aping what has come before and copying technology. China is definitely a major space player to keep an eye on.

Meanwhile, back in the USA....