Spacecraft completes second touchdown at 01:07 UTC on 11 July, ahead of returning to Earth with 2 sets of samples.

Japan's Hayabusa2 spacecraft has touched down on Ryugu for a second time, bagging samples which hopefully contain material from the subsurface of the asteroid.

A live webcast from JAXA's mission control room in Sagamihara showed operations in action and scenes of applause following the spacecraft’s successful, accurate setting down in area C01-Cb, close to an artificial crater generated by the SCI impact in April.

Hayabusa2 touched down at 01:07 UTC with the signal confirming the good news reaching Earth at 01:20 UTC. 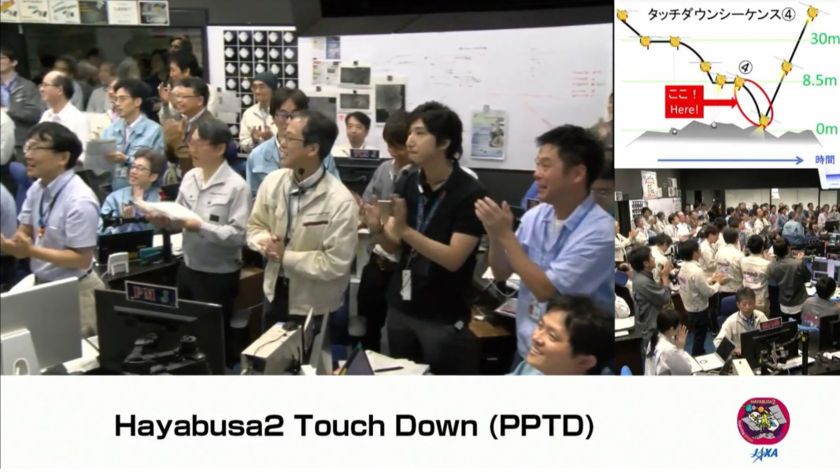 The operation’s success brings significant engineering and science achievement: carrying out the first robotic multi-sampling mission of a celestial body and the possible collection of subsurface material excavated by the prior experimental impact.

Hayabusa2 began its descent toward Ryugu at 01:46 UTC 10 July with a speed of about 40 centimeters per second, aiming for touchdown about 02:00 UTC 11 July. Hayabusa2 had dropped a reflective softball-sized marker to the surface in early June which helped guide the spacecraft’s descent and landing near the artificial crater.

A Digital Elevation Map containing the C01-Cb area, the position of the marker (TM) and its proximity to the SCI artificial crater.

At 30 meters altitude Hayabusa2 oriented itself for landing, seeing its high-gain antenna point away from Earth. This meant mission controllers lost telemetry and were temporarily able only to follow Doppler shifts in the signal from the spacecraft’s low-gain antenna for signs of progress. At 01:20 UTC a doppler shift received after 13 minutes of travel indicated that Hayabusa2 had pushed its meter-long sample horn into Ryugu and had then immediately started to ascend.

Around 20 minutes after touchdown antenna switching took place, with the high-gain antenna once again sending telemetry back to Earth, carrying information regarding the spacecraft. Confirmation that the touchdown sequence proceeded as planned followed at 01:51, prompting celebrations in the JAXA control room. Confirmation followed later that the sampling action—the firing of a tantalum bullet—was successful. 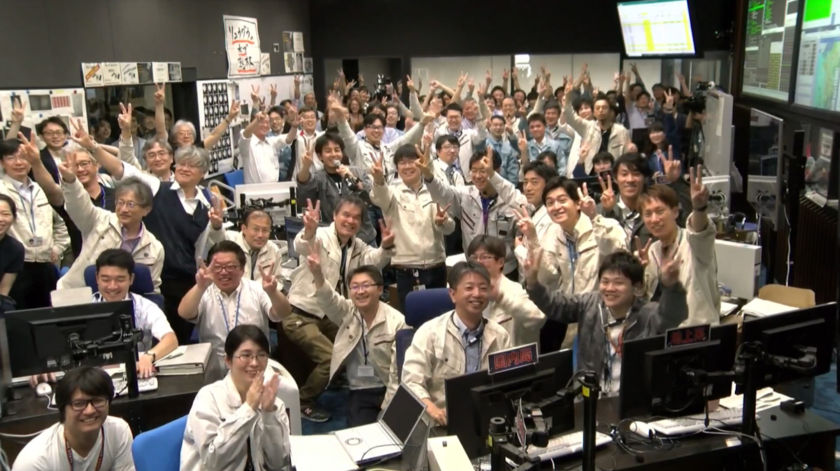 The mission team then planned the downloading of images to bring further confirmation of the success of the sampling operation, including imagery from the sampling horn. 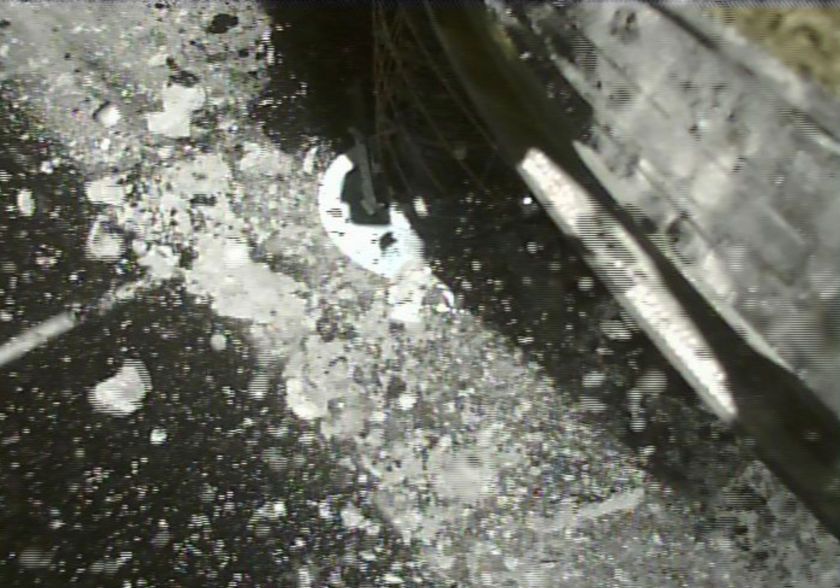 The first touchdown in February saw Hayabusa2 successfully collect samples from the primitive C-type asteroid Ryugu, achieving one of the main science goals of the mission.

JAXA and ISAS however decided to proceed with a second touchdown in order to boost sample volume, perform an unprecedented multi-sampling from a planetary body and, crucially, collect subsurface material excavated by the SCI experiment. In doing so the team will aim to answer questions regarding the very low reflectance of Ryugu, give insight into the regional heterogeneity of celestial bodies and, through comparison, assess the impact of solar wind on the surface.

The operation was not without risk, especially as Ryugu does not offer large, flat areas for landing. After site imaging with optical navigation cameras, confirming a sufficiently safe touchdown operation and assessing the condition of both the spacecraft and those on Ryugu, the decision to proceed with an attempt at a second landing was taken. Should the attempt have been halted, another window of opportunity was selected for the end of July, just before the asteroid’s surface temperature is expected to rise too high as it approaches perihelion.

[PPTD] This animation shows the DEM (digital elevation map) near the 2nd touchdown point (© JAXA, University of Tokyo & collaborators). This is also from our operation article: https://t.co/qaS3JZDAdF pic.twitter.com/bgpVj8m74X

In the near future for Hayabusa2 is the possible deployment of MINERVA-II-2, a small rover, currently expected after July. Hayabusa2 is then expected to depart Ryugu around November or December using its ion thrusters and head back to Earth, delivering the sample-return capsule for a landing in Australia near the end of 2020.