Hayabusa2 Safe and Sound after Blasting New Crater on Ryugu

Hayabusa2 is safe and sound after successfully using its explosive-packed SCI experiment to create an artificial crater on Ryugu. JAXA released images from DCAM3, the small camera Hayabusa2 left behind to monitor the explosion and crater formation, that show a cloud of debris spraying into space. 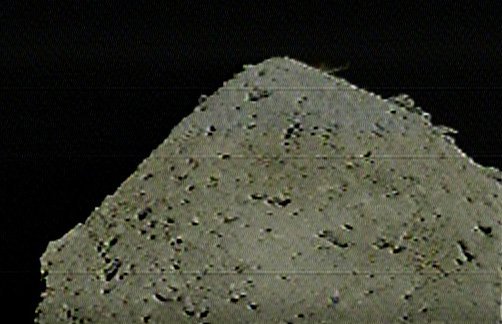 Hayabusa2's DCAM3 imager captured this picture of the SCI impact on 5 April 2019. The impact debris can be seen against the backdrop of space near the top-right limb of the asteroid.

Hayabusa2's DCAM3 imager captured this picture of the SCI impact on 5 April 2019. Debris from the newly formed artificial crater can be seen spreading into space.

The spacecraft successfully retreated behind Ryugu during the explosion, and is now making a two-week journey that will carry it more than 100 kilometers away from Ryugu while any debris from the crater formation settles or floats into interplanetary space.