A Workhorse at Mars

The Mars Reconnaissance Orbiter (MRO) Context Camera (CTX) is almost a silent star at Mars. While its sibling, the High Resolution Imaging Science Experiment (HiRISE) camera has its images plastered all over the internet with its dramatic—and often colour—views, CTX has been quietly mapping away in panchromatic grayscale. A few days ago, NASA released the latest round of MRO data to its Planetary Data System. This release brought the total number of CTX images of Mars to over 70,000, covering well over 90% of the Red Planet at a stunning resolution of 6 meters per pixel.

Let me say that again: Near-global coverage at 6 meters per pixel. 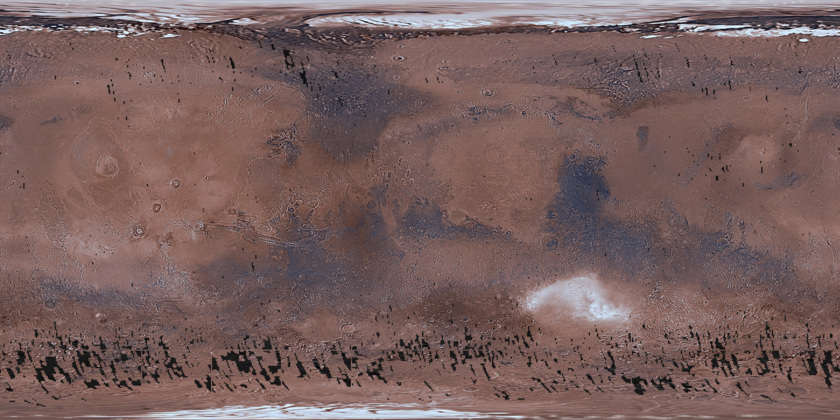 CTX coverage in the PDS through August 2015

I first got involved with The Planetary Society a few years ago, when I was on the CTX targeting team at Malin Space Science Systems. I’d often create “pretty pictures” and mosaics from CTX for Emily. Since we specifically targeted CTX to obtain complete coverage of specific regions/landforms, I decided to try my hand at creating large-scale seamless mosaics. This was during the time we were trying to pick a landing site for Curiosity, and so my first two mosaics were two of the candidate landing sites: Eberswalde and Gale craters. 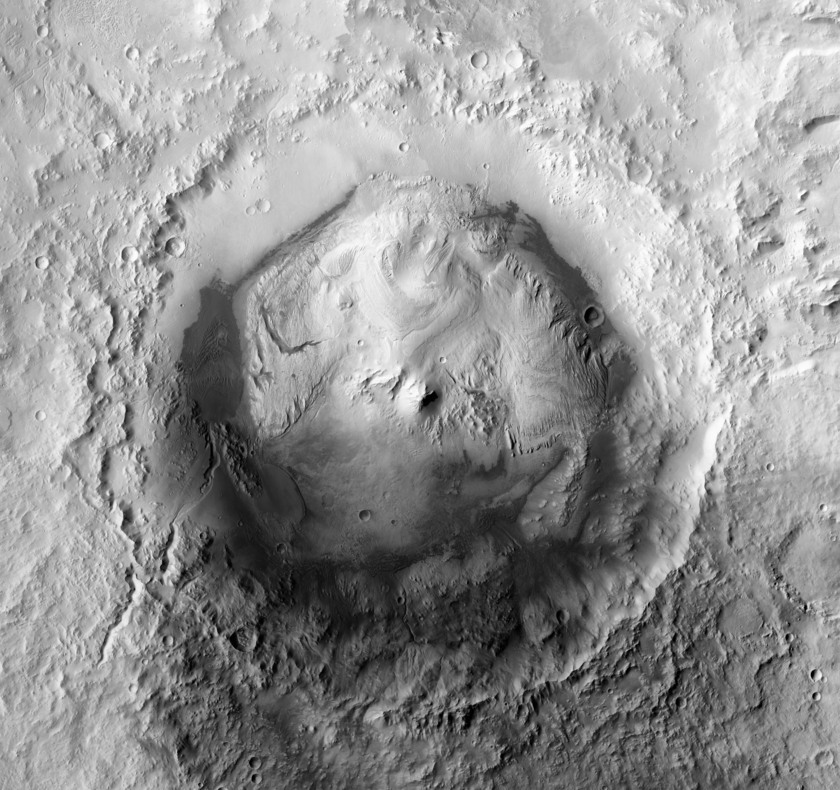 A mosaic of Mars Reconnaissance Orbiter Context Camera images covering all of Gale Crater. The whole crater is about 150 kilometers in diameter. 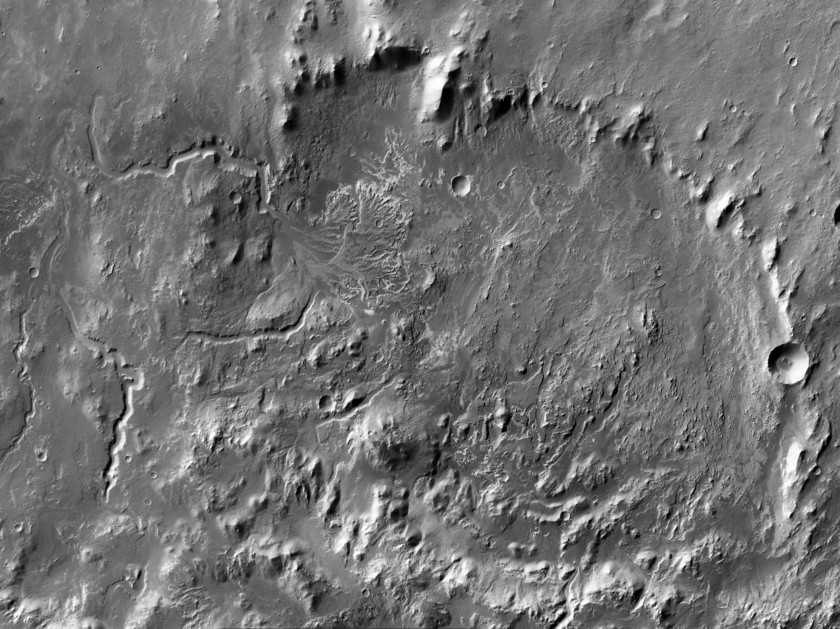 A mosaic of Mars Reconnaissance Orbiter Context Camera images covering Eberswalde Crater and its famous delta. The crater is about 65 kilometers in diameter.

The mosaics above were created using many CTX image strips. For Eberswalde, I used about 15 separate images. Gale on the other hand required over 30 images! While I use different software to process the images initially now that I’m no longer working on the CTX team, the basic process I use to create these mosaics is the same. Emily has asked me to describe the process to you, so I’ll try to do it as briefly as possible!

Creating large seamless mosaics with CTX can be tricky. The key is to find images of your area of interest that were taken under similar illumination (lighting) conditions—that is, where the shadowing will be similar. Obviously flatter places will have fewer changes throughout the year. However, if you’re looking to make a mosaic of, say, the steep-walled West Candor Chasma, the lighting changes will be very pronounced. 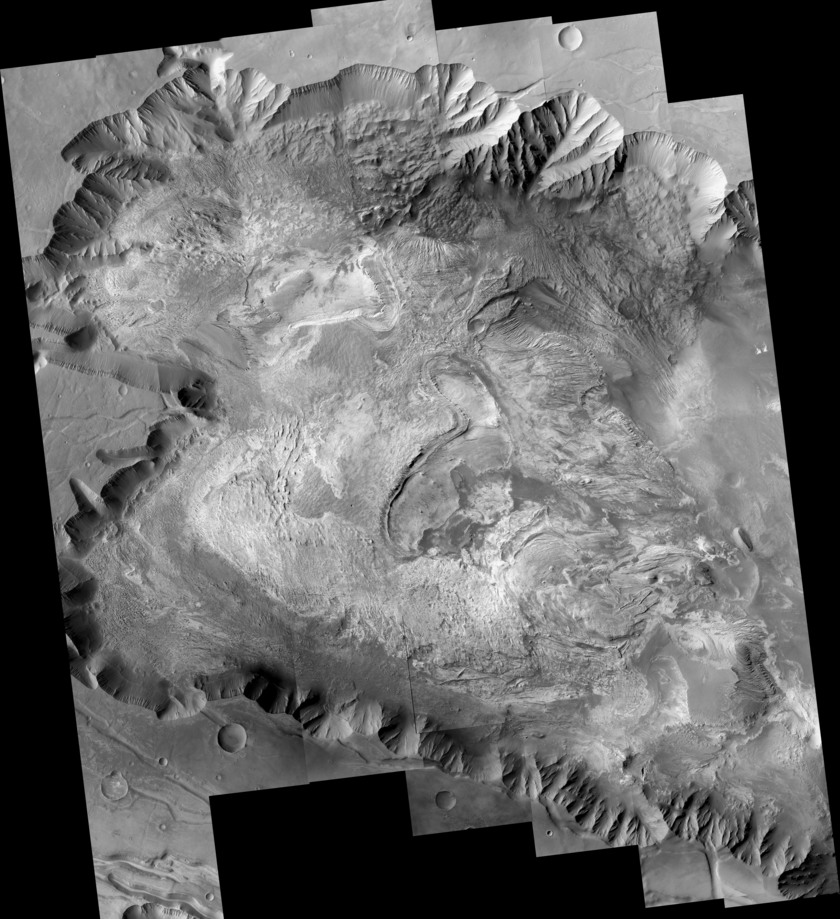 A rough mosaic of Mars Reconnaissance Orbiter Context Camera images covering the western portion of Candor Chasma, part of the Valles Marineris system. The scene is approximately 200 kilometers across.

The quickest way to determine if CTX images were taken close in time to each other is by the first three characters in the filename. CTX images have rather long filenames compared to HiRISE. So, let’s tear apart an example:

XN = Instrument mode (XN or XI—irrelevant for most purposes)

*This is an important note, as most planetary data you come across these days display coordinates in east-positive planetocentric. This lets it play well in ArcGIS, the software package the majority of mapping geologists use.

You also want to find the best time of year lighting and weather-wise for your area of interest. Some places are really dusty during certain times of the year, and so the images from those time periods don’t look great. Sometimes the shadows may be really deep and hide features you want to be able to see:

These two CTX images show the same crater in Mars' southern mid-latitudes during different seasons. In the springtime, the crater is nicely illuminated, with all of its walls visible. In fall however, the west, northwest, and part of the north wall are all in deep shadow.

The only way to really determine which time of year is best for your area is to look at multiple images of the area and figure out which ones look best. (Or, you can ask me nicely—I’ve looked at every CTX image that’s ever been taken except the couple thousand that were just released, and it was my job for awhile to determine the best time(s) of year to image certain places.)

So, let’s say I want to make a mosaic of a place and I’ve determined that images taken around the B19 timeframe look the best. I would pick images from perhaps the B17–B22 range, all taken close in time to each other. I can also use 17–22 from any other mission phase [P/G/D/F]; the illumination conditions will be similar. But how do I go about browsing through the images in the first place?

My favourite way to explore the CTX dataset is a tool created by a group at Arizona State University called JMARS—Java Mission-planning and Analysis for Remote Sensing. The name is slightly misleading as it allows you to browse image datasets for many bodies in the solar system, not just Mars. The interface is relatively easy to use, and the JMARS website has many resources and tutorials to help you navigate the program.

I won’t go through how to use JMARS here as that could be an entire post on its own. Long story short, I use it to find the images that I want. Then I go to the USGS Map Projection on the Web (POW) site to download map-projected versions of the images. To minimize distortion, I like to use a sinusoidal map projection with a centre longitude matching that of the image. Conveniently, the CTX image names include that centre longitude, albeit in west-positive coordinates.

The next step is to bring the TIFF images downloaded from POW into Adobe Photoshop and align them. I’ve tried using the built-in Photomerge tool in Photoshop to do this with varied results, so I often end up making the mosaics by hand. Once the images are aligned, hopefully with good overlap on either side, I bust out the eraser tool. Channelling old-school methods of mosaicking, I erase along the seams to blend the images together. You don’t want to do this in a straight line though, or the seam will still be obvious. Erase around different features in the image for better blending.

Once the images are all aligned and blended, I usually add a bit of sharpening and contrast enhancement to help the features in the image stand out a bit more. Contrast enhancement is your friend! By now you should have a great mosaic that Photoshop may or may not choke on trying to produce (doing the Gale crater mosaic at full resolution was trying even on my 8-core Mac Pro tower a few years back).

So, I hope I’ve given you a start down the path of utilizing the amazing CTX dataset to create your own mosaics. If you’d like to see more CTX images, you can follow me on Twitter—I try to post a CTX image every day, but must admit it’s becoming a once every few days thing thanks to travel and research obligations. But, I’ll keep trying to get them out on a semi-regular basis!

Thanks for the explanation, Tanya, and for all your hard work! It's great to know what goes into all the pretty pictures that we copy and paste into social media and never really stop to ask why.

These hi res mosaics shown here and elsewhere on this site are so stunning and beautiful. Having just recently learned how much the interested general public plays a role in creating mind blowing images from the precious raw data makes me appreciate the hi res views even more. Even with my beginner Photoshop skills I downloaded some raw Pluto images last night, applied some unsharp masking and voila! Detail that was captured in the raw data came to the fore. I'm reminded of something I read written by Ansel Adams. The 1st step is to capture all the desired information on the negative. If its on the film then it can be teased out and interpreted in the dark room. Also, in reflecting on all the sharpness and rich detail available these days, I remember that I was equally in awe of the 200 line per image video pictures of Mars that I watched on our Emerson B&W TV in 1965. Expectations change of course thanks to the unending passion and hard work that's been poured into this adventure. Thanks!