Editor’s note: Dr. David Crisp is the Science Team Leader for NASA’s Orbiting Carbon Observatory (OCO-2), a mission to measure and track atmospheric carbon dioxide. OCO-2 launched on July 2, and spent a month adjusting its orbit to join the A-train constellation of Earth observing satellites. On Aug. 6, the spacecraft made its “first light” observation. We’ve invited David to share how OCO-2 works, and what the first light measurement tells his team about the spacecraft’s performance.

The molecules that make up atmospheric gases absorb only certain colors of light.  These specific colors can be seen when the light is divided or “dispersed” into a rainbow of colors, or “spectrum.”  Scientists often distinguish these colors in terms of the “wavelength” of the light.  Ultraviolet and blue light have relatively short wavelengths (less than 450 billionths of a meter or “nanometers,” abbreviated as “nm”), while red and infrared light has longer wavelengths (longer than 600 nm).  Most atmospheric molecules absorb most strongly in the ultraviolet and infrared parts of the spectrum and only weakly at the wavelengths visible to our eyes (300 to 700 nm).

In the infrared part of the spectrum, the discrete colors absorbed by molecules are clustered together in “bands” of dark, narrow absorption lines.  These lines are clearly seen when light is dispersed into a spectrum.  The specific collection of colors or wavelengths absorbed by particular type of molecule depends on the type, arrangement, and bond strengths among its atoms.  More specifically, the relative positions and intensities of the absorption lines are associated with changes in the internal energy of the molecules as they transition from one vibrational and rotational state to another. These energy states can be predicted using quantum mechanics.  The arrangement of absorption lines within a band is therefore different for every different type of molecule, and forms a distinct molecular fingerprint for that molecule.  The wavelength and strength of the absorption by each absorption line can be measured precisely in the laboratory.  These experiments show that the strength of the absorption depends on the number of molecules present and other factors, including the temperature and pressure of surrounding gas.  Precise measurements of the amount of each color absorbed in a spectrum of light that has traversed the atmosphere can therefore be analyzed to estimate the amount of gas along the optical path.  This is the principle that underlies all atmospheric remote sensing for the Earth, other planets in our solar system, and even exoplanets around other stars. 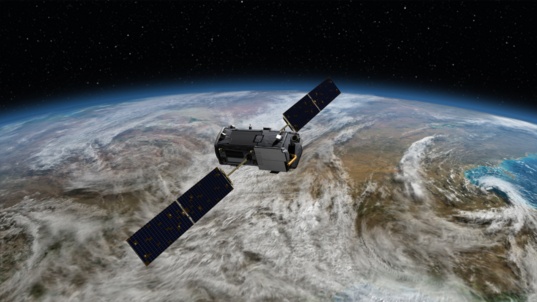 OCO-2 collects light at wavelengths where CO2 and O2 are absorbed, allowing scientists to “count” how much is present.

OCO-2 carries and points a 3-channel imaging, grating spectrometer.  This instrument precisely records the amount of reflected sunlight that is absorbed by carbon dioxide and molecular oxygen as this light traverses the atmosphere on its way to the surface, and then back up to the satellite.  Each spectrometer channel collects a narrow range of or colors (or wavelengths) and then splits this range of colors into 1016 discrete components, producing a high resolution spectrum.  The three spectral ranges used by OCO-2 are centered on a weakly-absorbing carbon dioxide band centered near 1610 nm, a much more strongly absorbing carbon dioxide band centered near 2060 nm, and the molecular oxygen A-band, at wavelengths near 765-nanometers (nm).  The spectral resolution in each channel is adequate to clearly separate individual absorption lines from each other and from the brighter background “continuum,” where little light is absorbed by the gases.

OCO-2 can digitally subtract clouds and aerosols from its images to ensure accurate CO2 and O2 readings.

The use of these three spectral bands also helps to identify scenes that are contaminated by clouds and aerosols (smoke, smog, dust).  Thick clouds and aerosols can obscure the surface, precluding measurement of carbon dioxide near the ground.  Scattering of sunlight by thin clouds and aerosols introduces uncertainties in the length of the optical path through the atmosphere, which can compromise the accuracy of the XCO2 estimates.  The oxygen A-band is very sensitive to scattering by clouds and aerosols. The combined use of the weakly- and strongly-absorbing carbon dioxide bands provides additional information about clouds and aerosols, because the absorption of sunlight by these two bands responds differently to their presence.  The simultaneous analysis of all three bands enables the delivery of XCO2 estimates with accuracies exceeding 0.25% (one part out of 400) over most of the sunlit hemisphere.

The OCO-2 instrument is an “imaging spectrometer,” which collects spatially resolved spectra along a narrow, 0.8-degree field of view. As it flies over Earth’s sunlit hemisphere, each spectrometer records a picture of the spectrum, called a “frame,” three times each second.  Each frame is divided into eight discrete spectra, recording the molecular oxygen or carbon dioxide abundance over adjacent ground footprints, each about 2.25 km (1.3 miles) long and up to 1.3 km (0.8 miles) wide. When displayed as an image, each frame looks like a bar code; a bright horizontal stripes of light, broken by thin, dark, vertical lines.  The dark lines form a familiar pattern, indicating absorption by molecular oxygen or carbon dioxide.  With 8 footprints per frame, each OCO-2 spectrometer collects over a million spectra each day over the sunlit hemisphere. Clouds and optically thick aerosols preclude observations of the full atmospheric column in many regions, but the rapid frame rate and small surface footprint size is expected to yield over 100,000 full-column XCO2 estimates each day.

The OCO-2 spectrometers were tested extensively prior to launch.  These tests calibrated its response to a variety of light sources including lasers, incandescent lights, and even sunlight that had traversed the atmosphere.  These measurements confirmed that the spectrometers had the sensitivity needed to discern intensity differences as small as one tenth of one percent.  They also showed that the instrument could distinguish atmospheric oxygen and carbon dioxide variations with this level of precision.  In other words, it could easily detect carbon dioxide variations as small as 1 part per million out of the background concentration of about 400 parts per million. However, to do this, its optical components had to be focused to a comparable level of accuracy. If any of these components moved by as much of the thickness of a hair, the instrument could no longer meet these demanding requirements.

Just over a month after OCO-2 was successfully launched from Vandenberg Air Force Base, all spacecraft subsystems were checked out, and a series of orbit adjustment maneuvers had placed the Observatory at the head of the 705-km Afternoon Constellation (A-Train).  Once in this orbit, we started cooling the instrument’s optical bench and detectors to their operating temperatures.  Early on the morning of Wednesday, August 6th, the optical system and detectors were not quite at their operating temperatures, but they were close enough for a test, so it was time for “first light”—our moment of truth.

At 6 a.m. Pacific Daylight time that morning, the observations from the day before were downlinked to a ground station in Alaska.  They were first sent to the NASA Goddard Space Flight Center (GSFC) in Greenbelt Maryland for decoding. They were then sent to the NASA Jet Propulsion Laboratory (JPL).  An autonomous program selected one frame for display from the 9000  or so collected on OCO-2 orbit number 506. The observation was over central Papua New Guinea.    A few minutes after they were received, Randy Pollock, the chief architect of the OCO-2 instrument and its Calibration Lead, presented this spectrum, sight unseen, to an auditorium filled over 200 present and former team members.  A few dozen other team members from around the world joined us via a video link.

The image of the first light “frame” is shown in figure below.  The top stripe shows the spectrum recorded in the 760 nm molecular oxygen A-band.  The middle and bottom stripes show the simultaneous, co-bore-sighted spectra of the carbon dioxide bands at 1610 nm and 2060 nm, respectively. The three bands appeared just as they had during the pre-launch testing at JPL.  The absorption lines were as dark, deep, and well resolved as expected, indicating that the instrument had not changed significantly since it pre-launch testing.  The brightness of the continuum provides information about the reflectivity of the surface (or atmosphere).  The contrast between the continuum and the spectral lines provides information about the abundance of molecular oxygen or carbon dioxide.

As noted above, the OCO-2 instrument is an imaging spectrometer and the benefits of that capability are shown even in this first frame.  For each stripe, the spectrum is dispersed from left to right. The vertical dimension of each stripe records spatial information in the 8 discrete footprints included in the field of view. In this frame, footprint 1, seen at the bottom of each stripe, is contaminated by a cloud.  The other 7 footprints appear to be (mostly) cloud free. 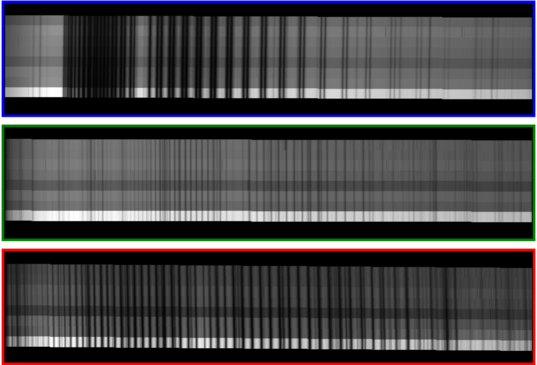 The second footprint from the bottom in each stipe was plotted as a line plot in the 2nd image displayed.  These results were crudely calibrated, allowing us to assess the throughput of the instrument. The intensities were well within the ranges expected, again providing confidence that the instrument was meeting its requirements. 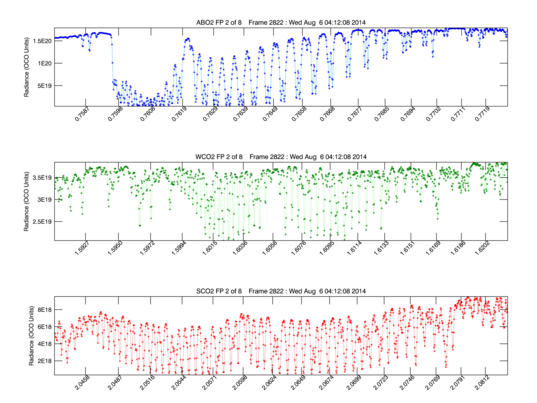 Footprint 2 (second from bottom) in each of the three spectral “stripes” shown in the first light spectra image are shown as line plots. These spectra have been converted from “data numbers” to physical units to facilitate a quick estimate of the instrument’s performance. Wavelength is expressed in microns across the X –Axis, and the spectral intensities are expressed in radiance units (photons/second/meter-squared/steradian/micron) on the Y Axis. The relative intensities, resolution, and contrast are consistent with results from pre-launch testing.

Over the next several weeks, the OCO-2 team will conduct a series of calibration activities to fully characterize the performance of the instrument and observatory. These activities will include observations of internal calibration sources and targets, observations of the moon and well-characterized calibration targets on Earth’s surface. In parallel, OCO-2 will routinely record and return up to 1,000,000 science observations each day. These data will initially be used to test the ground processing system and validate its products. Then, before the end of this year, the team will begin delivering calibrated OCO-2 spectra data to NASA’s Goddard Earth Sciences Data and Information Services Center (GES DISC) for distribution to the global science community and other interested parties. The team will begin delivering spatially resolved estimates of carbon dioxide to that same center for distribution in early 2015. Scientists will use OCO-2 data in computer models to generate maps of carbon dioxide emission and uptake at Earth’s surface on scales comparable to the size of the state of Colorado. 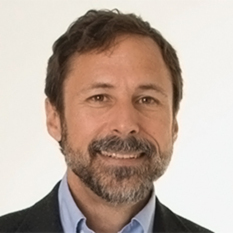