Last week, a group of approximately 30 students and post-docs from Western University, York University, and Queen’s University participated in the first of a 2-week Mars analogue mission in concert with the Canadian Space Agency (CSA). The mission is part of a program with perhaps one of the longest names you might ever encounter: The Natural Sciences and Engineering Resource Council of Canada Collaborative Research and Training Experience (NSERC CREATE) Technologies and Techniques for Earth and Space Exploration Program. This program is designed to get scientists and engineers working and training together for the advancement of planetary science and robotics. Our team this year consists of geologists, physicists, and robotic and aerospace engineers, bringing a wide array of knowledge to the table.

The ultimate goal of this Mars analogue mission is to simulate Mars Sample Return, which is one of the highest priorities of the international planetary exploration community. More detailed laboratory analyses can be conducted on Earth than by rovers on Mars, thus the desire for sample return. Analysis of these samples by scientists on Earth will provide a great deal more information on Mars’ past and present climate, geology, and potential for life. 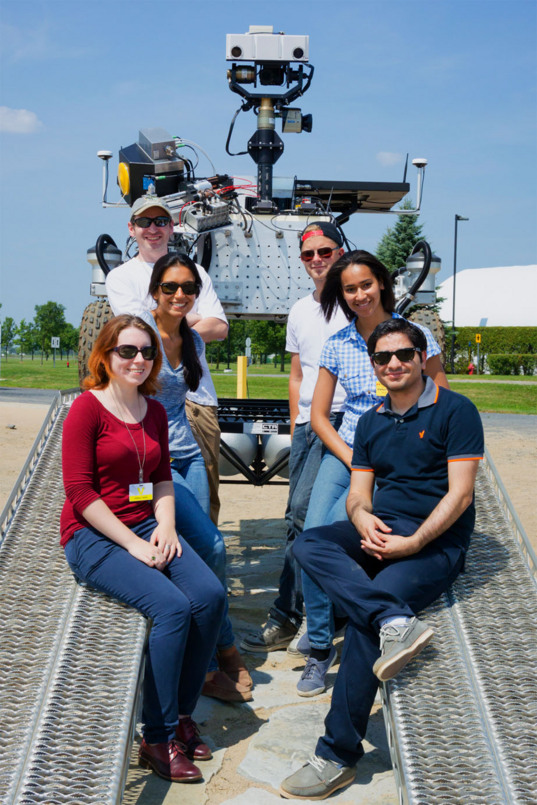 Most of the participants in this mission are based at Mission Operations at Western University in London, Ontario. However, a small group of 6 (myself included) were sent to the CSA headquarters in Saint-Hubert, Québec to assist in engineering operations of the CSA’s Mars Exploration Science Rover (MESR, called “MEE-zer” or “MEH-zer” depending on if you’re talking to one of the Anglophone or Francophone folks here). MESR is a six-wheeled rover with a robotic arm equipped with a microscopic imager dubbed TEMMI (Three Dimensional Exploration Multispectral Microscope Imager) and mini-corer to drill into rocks. The rover is also equipped with a LIDAR for producing 3D maps of the surrounding terrain, allowing both the scientists and the engineers to better localize and operate the rover. 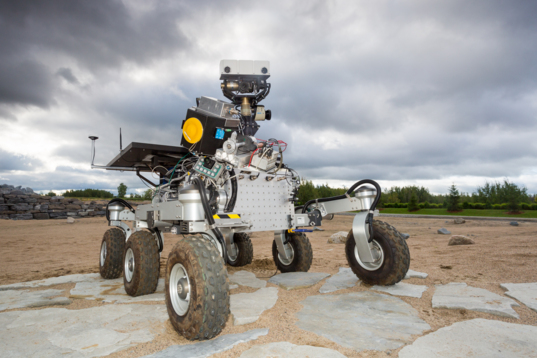 Science operations at Mission Control take place between 7am and 12:30pm each day, with data processing and planning until 9.30am when the plan is then relayed to the Rover Team at the CSA. The Rover Team is then given a 5-hour window to complete the commands requested by Mission Operations. The MESR rover is completing its tasks in the CSA’s outdoor “Mars Yard,” a test bed area where engineers can practice driving through different types of terrain a rover might encounter on Mars. 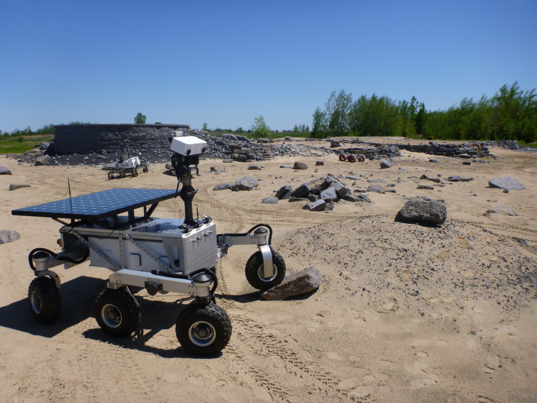 MESR in the CSA Mars Yard

The Mars Yard is located at the John H. Chapman Space Centre (the headquarters of the Canadian Space Agency) in Saint-Hubert, Québec.

One of the goals of the analogue mission is to give students experience with the pace of actual Mars mission operations. While the day’s commands may sound as simple as “drive to rock X and image it with the microscope, then drive to rock Y and get Raman spectral data,” these operations take time: The time to drive to the sample, 15 minutes deploy the robotic arm, 5–10 minutes to focus the camera, 5 minutes to acquire the image, 15 minutes stow the arm since the rover cannot drive without the arm being stowed, etc. The video below shows MESR motoring along to give you an idea of how slowly it moves, with a top speed of 0.4 km/hr. All data acquired during the sol is then sent back to Mission Control at once at the end of the sol—as opposed to immediately after the data is acquired—to more accurately simulate a real Mars mission.

Some aspects of the mission are not exactly realistic—for example, driving the rover in teleoperation mode while the rover is assumed to be on Mars, and having a remote control with a big red emergency stop button in case anything goes wrong. For the sake of time, we are also not simulating the time delay in sending commands to Mars. Our rover operations are being conducted in real time, but the CSA engineers do have the ability to add any operational delay to simulate teleoperation of a rover on the Moon from Earth for lunar analogue missions. Our real-time Martian ops may not be realistic for operating a rover from Earth, but do simulate what it would be like to teleoperate a rover from Mars orbit or from inside a base station on the surface. For future deployments, more realism will be put into the mission by making use of the autonomous capability of MESR.

In this analogue mission, we “added” two instruments to the rover arm that are simulated by students using portable handheld instruments: An x-ray fluorescence (XRF) spectrometer and a Raman spectrometer. These each provide data on rock composition, with Raman useful for lighter elements and XRF for heavier elements. Raman spectroscopy is also useful for detecting organic materials, which has made it the spectrometer of choice for astrobiologists (a UV Raman spectrometer, SHERLOC, is slated for the Mars 2020 rover to look for organics). 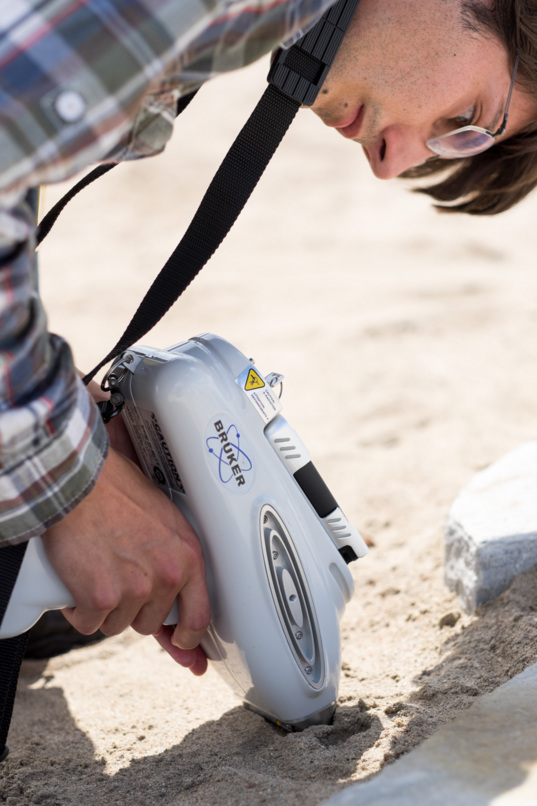 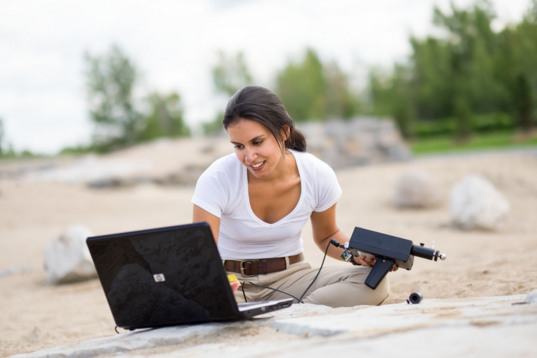 Raman spectroscopy in the field

This is the second year we've conducted one of these analogue missions, and each year we pick a theme for naming targets (as is done on real missions). Last year's theme was Star Trek: Locations of interest were named after planets, target rocks after ships, and targets on individual rocks after characters. This year we moved away from sci-fi and decided to go with Shakespeare: Areas of interest are named after plays, outcrops after characters. The landing site was dubbed "The Globe." 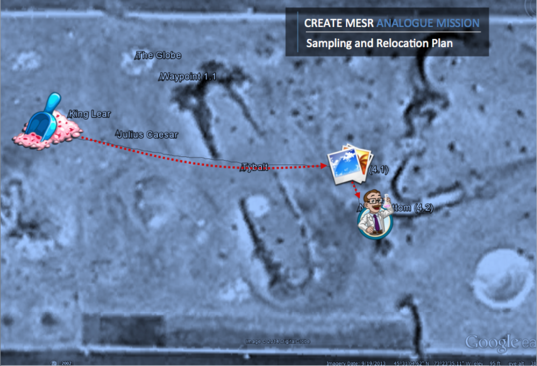 The science team plots their desired traverse for sol 3, complete with graphics to show what they'd like the rover to do at each target.

A few non-martian things made their way into our mission. Poor weather conditions in Saint-Hubert led to the cancellation of operations on sol 2, as the MESR rover’s sensitive electronics—designed for the desert conditions of Mars—cannot withstand pouring rain. The solution to light rain is not very martian either: Setting up a tarp over the rover. On sol 3, MESR was only commanded to analyse a single target area with no driving. This allowed the engineers to erect a tarp over the rover so operations could continue for the sol despite light rain. 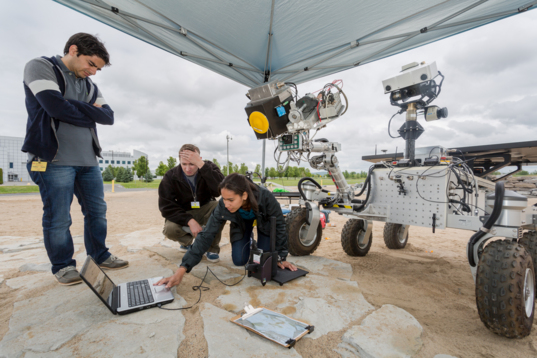 MESR in the rain

The rover team acquires Raman spectral data with MESR sheltered from the rain under a tarp.

In another effort to finish operations before thunderstorms came our way, we used a handheld drill to get our rock core samples rather than the mini-corer on MESR's robotic arm. This reduced the drilling time from ~6 hours to a few minutes. 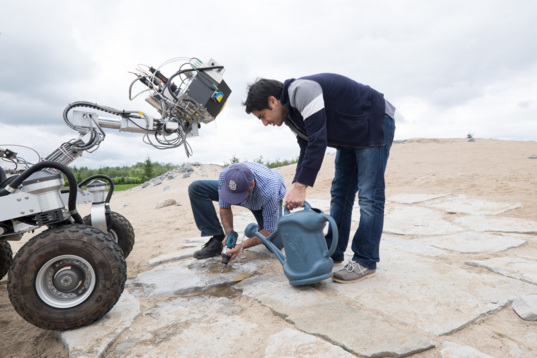 Water is used to help cool down the drill, using a high-tech plastic watering can.

Near the location of the drill site, the science team also commanded the rover to sample some of the regolith (in our case, sand) adjacent to the rock. We also took a microscopic image of the sand with TEMMI. Unlike the close-up Mars Hand Lens Imager (MAHLI) aboard Curiosity, TEMMI needs to be in direct contact with its target to take pictures. This requires very precise positioning of the rover arm, as you don't want to smash the camera into a rock face! To prevent this, the engineer driving the rover monitors the pressure being exerted upon the arm while another engineer out near the rover in the Mars Yard keeps a careful eye on how close TEMMI is to the ground—metal ruler in hand.

TEMMI takes some great high-resolution colour images, allowing us to study the individual grains of sand at our target. 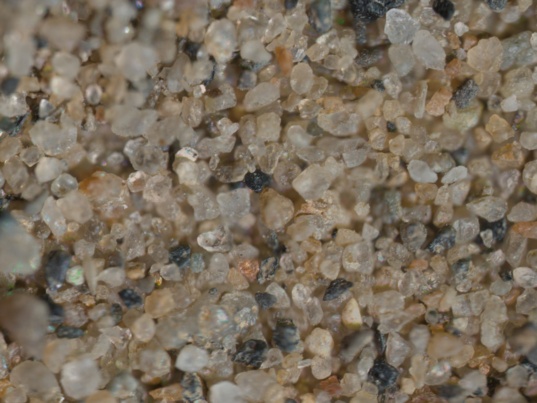 TEMMI image of "regolith" in the Mars Yard

In this case, the "regolith" is sand.

We also encountered life on “Mars.”

When approached for further study, it quickly reached escape velocity.

The weather forecast for this week is much more promising, and should allow for nominal rover operations for the remainder of the analogue mission…other than possible Martian cat encounters. Stay tuned next week for part 2 of the mission, and our results from "Mars!"