The Case of the 5-Millisecond Cosmic Radio Burst

Everyone loves a good mystery. In astronomy, there is nothing more exciting than an unexplained signal. Perhaps the most tantalizing, and most difficult, of astronomical mysteries are transients: signals that appear only temporarily or randomly, frustrating attempts at follow-up. The most recent transients on the scene, fast radio bursts (FRBs), are still defying explanation, and may hint at some of the strangest astronomical sources yet. 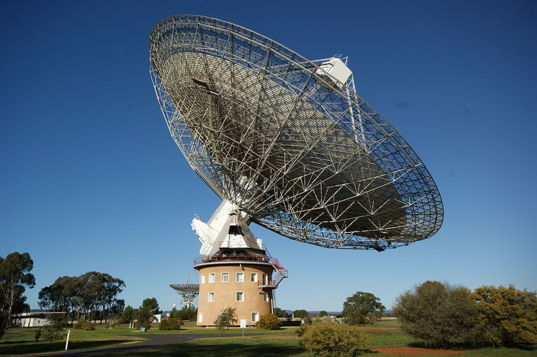 The Parkes Radio Telescope, with which all but one of the known fast radio bursts have been found.

Throughout astronomical history, whenever something has gone bump in the night, it has hinted at a new phenomenon, challenging our understanding of the Universe. In the late 1960s, Jocelyn Bell Burnell found a strange “scruff” on the read-out of a radio array in a Cambridge field. The signal was so unexpected, she and her group seriously considered that it could be an alien message, but finding examples all over the sky ruled out that interpretation. In the end, it turned out to be the first discovery of pulsars – rapidly spinning neutron stars whose magnetic fields accelerate jets of radiation from their poles – and resulted in a Nobel Prize for some members of the team. Around the same time, gamma ray satellites searching for evidence of nuclear testing started seeing bursts of radiation coming from above, rather than below. Years of debate followed before astronomers concluded that the gamma ray bursts were originating in the very distant universe, and therefore must be extraordinarily energetic. We’ve now seen thousands of bursts, and by studying their spectra and their afterglows in different wavelengths, we’ve been able to determine that some of them are the explosions of massive stars, and some probably come from neutron-star collisions. 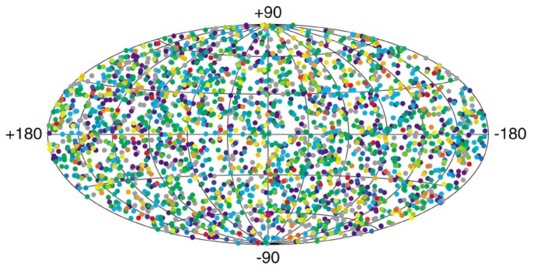 The positions of 2704 gamma ray bursts, as seen by the BATSE instrument. The uniform distribution of bursts on the sky, rather than a concentration mainly in the plane of the galaxy, suggests they must be extremely distant.

As for fast radio bursts, the explanation is still anyone’s guess. The first FRB to be discovered, in 2007, was so strange and singular an event, it took years for the community to agree that it was anything more than an instrumental glitch. Known as the Lorimer burst, the signal lasted only 5 milliseconds, but the radio emission was stretched across a wide range of frequencies, indicating that interstellar plasma had dispersed the radiation in the same way a prism can spread out visible light into a rainbow. This suggested a truly cosmic origin for the burst -- in order to be so highly dispersed, the signal must have passed through millions or even billions of light years of intergalactic clouds. 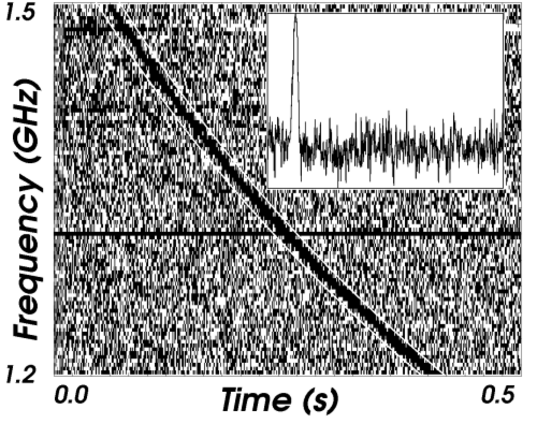 The radio profile of the first Fast Radio Burst, known as the Lorimer burst. The smearing of the signal across frequencies hints at its extragalactic origin. The inset box is the time sequence of the signal strength at one frequency, corrected for the dispersion.

For years, however, the Lorimer burst was in a class of its own. The second FRB wasn’t found until 2012, and that one only in archival data from the Parkes Radio Telescope, the same telescope through which the original burst was seen. When a few more bursts were seen at Parkes, through careful examination of real-time data, it became clear that whatever FRBs might be, they really were happening, and often. Early estimates of an event rate suggested there could be 10,000 bursts per day, occurring randomly in the sky, and blinking out quickly that they would be very easy to miss. The fact that only Parkes had ever seen an FRB was still troubling, though. Perhaps it really could be just some kind of instrumental glitch.

So it came with some relief to the astronomical community when, in early April, astronomers saw a burst with the giant Arecibo radio dish in Puerto Rico. This burst seemed consistent with the six already seen by Parkes, suggesting it was another glimpse at a new kind of astrophysical event. The question remains, however: what is it?

There are many theories. Here’s a quick run-down of a few of them: 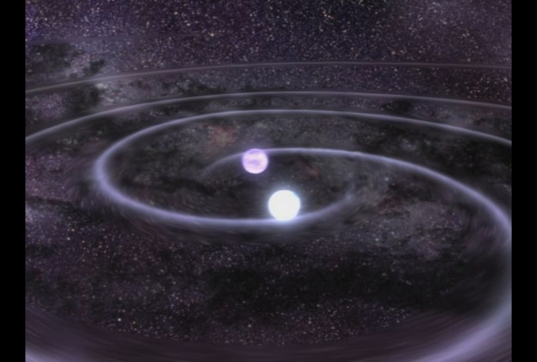 An artist’s impression of inspiralling neutron stars. Collisions of neutron stars may be responsible for both gamma ray bursts and fast radio bursts (FRBs).

Neutron stars are the densest form of matter that still has any kind of structure. When a massive star exhausts its nuclear fuel, it can explode in a supernova, leaving the ultradense core of the star to collapse on itself. The protons and electrons fuse together to make neutrons, and the whole object becomes basically one massive nucleus. The remnant is a rapidly spinning, highly magnetized star, with more mass than the Sun crammed into a sphere about the size of Manhattan. The conditions inside a neutron star are so extreme, they push our understanding of nuclear matter and particle interactions to the limit. There’s an ongoing debate about what exactly the inside of a neutron star is made of. In some models, it’s a neutron superfluid soup; in others, even the neutrons themselves are fused together and the interior consists of a mush of quarks known as strange quark matter.

If you add enough mass to a neutron star, though, no force of nature can hold it up, and it collapses into a black hole. The critical mass (known as the Tolman–Oppenheimer–Volkoff limit) depends on the nature of the star’s interior, but it also depends on whether or not the star is rotating rapidly. If the star is above that critical mass but spinning, the centrifugal force can help keep the star from collapsing right away. Even if held up by its spin, however, the star constantly loses angular momentum through magnetic braking (when magnetic fields carry mass away along the field lines), so the final collapse is just a matter of time.

Exactly how much time is what everything hinges on. If the blitzar model of FRBs is correct, you need a mechanism to (1) make the star supramassive and (2) keep it from becoming a black hole so quickly that it can’t emit a radio pulse. The original proposers of the blitzar model imagined that the supramassive neutron star might form during the supernova. The uncertainty in the neutron star interior model makes it still unclear whether the collapse would be too fast, or whether enough supernova events would have just the right balance between mass and rotation. Alternatively, the supramassive star might form via a merging of two neutron stars, in which case there may be an association with short gamma ray bursts rather than supernovae. The plausibility of this scenario as well depends on the rates and timescales, which in turn depend on the extreme physics of the neutron star interior. The recent discovery of a four-quark particle at the LHC might even be relevant to this question, as it lends some support to the idea of a “quark mush” neutron star core.

While theorists crunch the numbers to find exciting new ways to explode astrophysical objects, observers are busily hunting for more FRBs in the sky. The current tally is somewhere around 10, and with each new event, we gain valuable information. Correlations between FRB locations and active star-forming galaxies would suggest they come from supernovae, whereas more FRBs close to the plane of our galaxy would lend support to the idea that they’re closer than initially believed. We’re also looking for counterparts at other wavelengths (though we’ve seen none yet) – and maybe even gravitational waves from possible neutron star binaries. 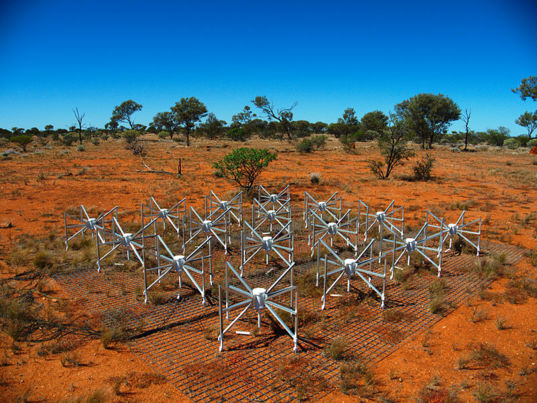 A tile of the Mileura Widefield Array (MWA) in Western Australia. A survey is now underway to detect fast radio bursts (FRBs) with the MWA, which can watch large regions of the sky at once, increasing its chance of catching FRBs.

As always in science, what we really need is more data. We’re just beginning to piece together this puzzle, and the picture it forms at the end could be spectacular. We might be watching the formation of new black holes, millions of light years away, and at the same time gathering clues to how subatomic matter behaves under the most extreme conditions in the Universe. Or we might be seeing something new in our own cosmic backyard. Either way, it’s far too enticing to stay a mystery for long. 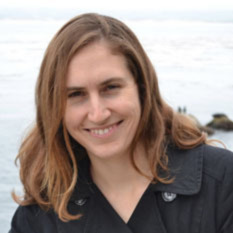 In my opinion, it s related with one constant of Plank, cf https://fr.m.wikipedia.org/wiki/Charge_de_Planck, sorry it is in french. Cela signifie que l on connait les mathematiques et la physique, for me it may be an anlien signal...