Editor's note: This post was originally published on Pellier's own blog and is reposted here with his permission.

Can features on Neptune be observed by amateur astronomers? Neptune is rather similar to Uranus: Its very cold color (blue) demonstrates a strong absorption of long wavelengths (red and infrared). Because of this, we are going to see the most details and contrast in these color bands. For years, the Hubble Space Telescope and some professional terrestrial observatories have been revealing incomplete belts and spots on the surface of Neptune. Astronomers even suspect that seasonal change may be happening, because those belts and spots have been intensifying noticeably in the southern hemisphere, which passed its summer solstice in 1984 (if Neptune were Earth, it would be now in its late southern winter, equivalent to the end of February in Earth's northern hemisphere).

These two IR images of Neptune were taken by the Hubble Space Telescope in 2005 with a long-pass 850 nm filter. The south pole is at bottom. Heterogeneous belts and spots are visible in the southern hemisphere, as well as a bright limb on the winter north pole.

Above are two infrared images taken by Hubble in 2005 with a long-pass 850 nm filter. This is an infrared filter, a bit deeper into the infrared than those used in the amateur world, but of similar transmission in regards to the details visible. The south pole is at bottom. We clearly see those heterogeneous belts and spots in the southern hemisphere, as well as a bright limb on the winter north pole.

The Pic du Midi, a professional observatory in France, has also produced very interesting data on Neptune. While they are of course not as detailed as those taken by Hubble, its images are a kind of intermediate step just above the amateur level, making for excellent comparative data. Below you can see two images taken a decade apart with Pic du Midi's 1-meter telescope and an infrared filter. South pole is at bottom left. The irregular brightenings are obvious and they correspond to the pieces of belts imaged by Hubble.

Two images of Neptune taken over the past decade taken by the 1 meter telescope with an infrared filter at Pic du Midi in France. The south pole is at the bottom left.

Latest results of the amateur world

Since August 2013, amateur images of Neptune show not only a brightening on the south pole, but also a clear brighter spot. Below are two images taken by an amateur mission of the Society of Astronomy of Nantes last august at the T620 of the Astroqueyras observatory, a LRGB image at left and an IR at right, that shows the south brightening (orientation is still the same).

These two images of Neptune were taken by an amateur mission of the Society of Astronomy of Nantes in August 2013 at the T620 of the Astroqueyras observatory. The left is an LRGB image, while the right is IR, both taken with Neptune at the same orientation.

And now we can cite some proper amateur results! :) Several observers have obtained coherent data, mostly with telescopes of 350 mm. We can recall first the image by Damian Peach in 2010 (despite color this is a R+IR), and this year, Pete Gorczynski has been the first (to my knowledge), followed by John Boudreau (with a C11), Paul B. Jones, Steve Fugardi and Paul Maxson. In particular, the bright spot should get more attention; its coordinates would be longitude = 10° and latitude = 45°S (measured by Marc Delcroix). Here are some of their images (thanks guys, and congratulations!).

This collection of images of Neptune, taken in August and September 2013 by amateur astronomers, were mostly taken at 350 nm wavelengths. The bright spot visible in each image is located at ~45°S, 10°W (measured by Marc Delcroix).

Those spots and brightening correspond quite well with the pieces of belts and spots visible on professional images. Is this again a new boundary broken by the amateurs? 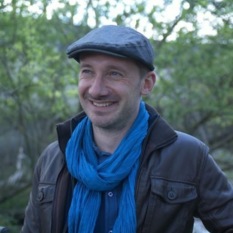 Todays amateur is yesterdays professional. That's where technology has taken us. That is good!

An excellent article Christophe and clearly the new frontier as amateurs as the talents of those you've mentioned and show prove. These are exciting times, particularly at the outter fringes if our solar system. It wasn't that long ago when the most the pros could produce of this gas go any was an ambiguous blob. Now look at these backyard pioneers.

Thanks Bob and Pete. Yes the improvements in amateur planetary observations are exciting :)