Space exploration is all about imagination. An instrument I built on the Huygens probe touched the surface of Titan in January 2005, but in my head it had done so innumerable times in the early 1990s, trying to anticipate what would happen on that alien world. That same leap of imagination is made in science fiction, and it is through books and movies that our minds are often exposed to the possibilities of other worlds.

The fictional world Tatooine, scene of action in the Star Wars movies, is named after a town in Tunisia, where parts of the movies were filmed. The movies had spectacular special effects, showing landspeeders, lightsabers, and triple suns[1]. But the desert backdrops against which the movies were filmed are real terrestrial landscapes, which prove to be perhaps unexpectedly dynamic. Deserts can change dramatically when rare but violent rainfall occurs (and in fact the Star Wars filming was beset by exceptional rain) and in the long dry intervals between rainstorms, sand blows in the wind such that dunes evolve and migrate. 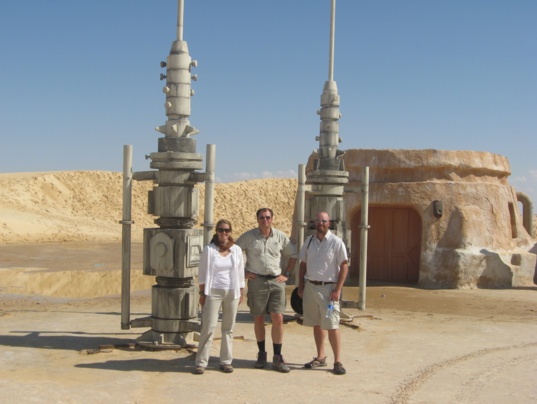 Ralph Lorenz (center), with colleagues Radebaugh and Barnes, at the Mos Espa site in Tunisia in 2009. We are standing in front of the ‘moisture vaporators’ (sic) movie props. The looming barchan dune, pockmarked with tourist footprints, is in the background.

One of the challenges in measuring dune migration on Mars or Earth is that dunes often appear in vast sand seas where not only can it be difficult to tell one dune from another, but there may be no fixed reference point against which to measure the dune’s position. With good knowledge of the spacecraft position and camera pointing, it may be possible to measure the absolute position of objects in the scene accurately enough, but more generally only the relative positions in an image are accurate enough to measure the few meters of dune migration.

Most dune movements are recorded of small barchan dunes, which are crescent-shaped and are the fastest-moving type, and form in unidirectional winds where the sand supply is limited. Sometimes they are seen on near-featureless plains, but on other occasions there may be textures in the substrate that allow images to be matched up. A good example is the measurement of slipface advance and ripple migration on dunes in Nili Patera on Mars, observed recently with the Mars Reconnaissance Orbiter HiRISE camera.

Back-and-forth blinking of this two-image animation shows movement of a sand dune on Mars. The before-and-after images were taken nearly three Earth years apart by the High Resolution Imaging Science Experiment (HiRISE) camera on NASA's Mars Reconnaissance Orbiter. The scale bar is 50 meters (164 feet). The site is part of a dune field inside the summit caldera of Nili Patera, an ancient volcano, at 8.7°N, 67.3°E. The images show a dark, rippled sand dune overlying bright-toned rock. When the images are blinked back and forth, advance of the dune's lee (downwind) front over the time period of 941 days is clearly seen in the area indicated by the arrow near the lower-left corner. Other arrows indicate places where the margin of the dune has moved. In contrast, the ripples have changed so much that their migration cannot be tracked.

Sometimes on Earth the reference points (or 'fiducial marks') are artificial. Dune and ripple movements in the field have often been documented relative to stakes placed in the ground for this purpose, although some reference markers can be accidental. One remarkable dune migration measurement was of a barchan dune in Egypt. A team led by the desert pioneer Ralph Bagnold (whose book, The Physics of Wind-Blown Sand and Desert Dunes, remains required reading for aeolian geomorphologists) had camped by the slipface of the dune in 1930, determining the location astronomically to be 20°54'43"N, 27°30'29"E. No less than 50 years later, Vance Haynes of the University of Arizona came across a cache of fuel cans and food containers which, by consulting Brigadier Bagnold, was confirmed to be that camp. In the meantime, the dune had run over the camp and moved some 200 m beyond, averaging 7 m per year. When dune movement is measured in satellite or aerial photos, positions are usually referenced to man-made structures that cross the desert out of necessity, like pipelines, roads or railroads. Desert-dwellers rarely erect buildings among moving dunes, for obvious reasons.

But one set of buildings were erected in the Tunisian desert without regard to their long-term survival in a dynamic desert environment.  These are the buildings that portray the city of Mos Espa in Star Wars Episode 1: The Phantom Menace, filmed in 1997. This cluster of a couple of dozen buildings is in fact a major tourist attraction, conveniently reached from the nearby oasis town of Tozeur. Seen in satellite images in Google Maps (33°59'39.78"N, 7°50'35.21"E—these coordinates are of the circular building at the northeastern corner of the complex. Users of Google Earth can just use this KML file.

Together with colleagues Jason Barnes and Jani Radebaugh, I came across the Mos Espa site on a planetary analogs field trip associated with a sedimentology conference in 2009.  The trip was led by Italian planetary geologist Gian Ori, with Tunisian geographer Nabil Gasmi, focusing on the giant Chott El Djerid salt flats, which may resemble some features on Titan. As well as dunes, Titan apparently has many extremely flat areas that presumably were once liquid-covered. Additionally, areas around some of its lakes and seas appear to have a bright surface coating, much as the margins of some lakes in dry climates on Earth have bright evaporite deposits (e.g. the Chott El Djerid, or the area around the Great Salt Lake, or on a smaller scale, Death Valley). Since the Mos Espa site was nearby, we took the opportunity to see the dunes and the set  (some other pictures are at my website).

We learned that the set was built in the midst of a dune field, actually the only set of dunes for quite some distance around, and that these dunes were in motion. In fact, a small set used in the shooting of Star Wars Episode 4: A New Hope back in the 1970s had been overrun by a dune a couple of decades ago. This seemed to me like a great story[2], and a good example to use for teaching about dune migration. So with the help my colleagues, I wrote up a journal paper documenting the dune movement in satellite imaging. Academics with institutional access can obtain the published paper at the website for the journal Geomorphology, but an unformatted preprint version of the paper is available at my website.

In 2009, a large barchan dune loomed just east of the site. But even only a few years ago, this dune was nowhere near! The Google Earth historical imagery allows you to look at several images taken in previous years, and we measured the position of this dune and several others relative to the easily-recognized buildings. It seems this dune has been moving at about 15 m/year! 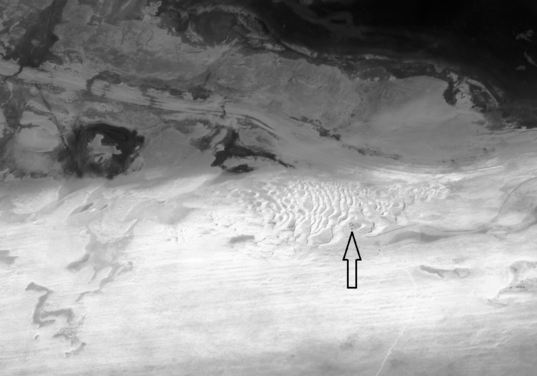 The dunes of Tatooine

This is a public domain 10 m-resolution image from the NASA New Millennium EO-1 spacecraft. At this resolution, individual dunes can be made out, and if you know where to look (arrow) the set is detectable, but the individual buildings in the set are just too small.

The rate at which sand moves—usually expressed as cubic meters of sand per meter of dunefront per year—is a function of the environment. For Earth, the wind speed distribution is usually the most variable factor, although the grain size and composition can play a small role. Measured dune migration rates vary by a factor of 100 or so, with the fastest-moving dunes in the Bodele Depression in Chad, where the sand is actually made from tiny hollow shells which are very easy to move. On other worlds, the atmospheric density and gravity are also factors in sand mobility; so far, only a few examples of Mars dune movement have been detected, and those at speeds of only a meter per year or so. Although Titan has more of its area covered by dunes than any other world (with the exception of the fictional planet Arrakis of the Dune sci-fi novels!) Titan's dunes are so large, their movements are expected to be immeasurably small, at least until some future mission visits. Venus, incidentally, has only a couple of small dune fields—most likely because there is very little sand-sized material. Dunes on Titan and the terrestrial planets (and on fictional worlds!) are discussed at some length in a book by myself and Jim Zimbelman of the Smithsonian Institution, to be published at the end of the year, entitled Dune Worlds: How Windblown Sand Shapes Planetary Landscapes (Springer Praxis Books / Geophysical Sciences). 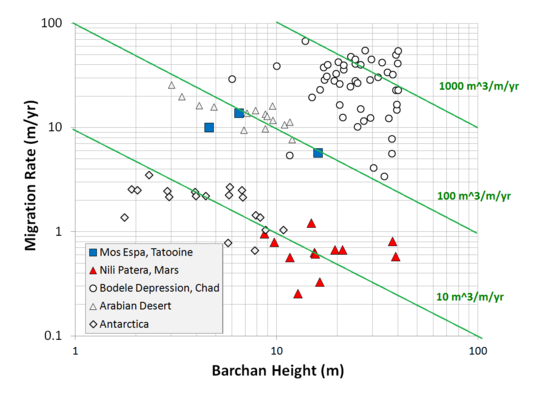 Dune migration rate for a given environment varies as the inverse of the dune size.

It remains to be seen how fast the dune moves—the migration rate 2008–2010 seems to have been less than in the prior years, perhaps as a result of higher rainfall immobilizing the dunes for a longer portion of the year. It may be that the disruption of the airflow around the cluster of buildings scours the advancing sand away; in fact, designers of research stations on Antarctica shape the buildings and test the sand transport in wind tunnels to minimize the danger of snow accumulation. It may be that mitigation measures are introduced to stabilize the dune, or remove the sand with bulldozers (an expensive and inelegant solution).

Reality can sometimes be more amazing than science fiction! Now, with regular high-resolution images from space, and field photos from both geomorphologists and tourists, shared via a network that connects computers together worldwide, you too can observe our dynamic landscape in action from the comfort of your home or classroom. Even if the threatening barchan fizzles out as it meets the set, a larger, slower-moving barchan is lumbering behind it. Watch this space!

Ralph Lorenz is a member of the Principal Professional Staff at the Johns Hopkins University Applied Physics Laboratory.

[1] Last year an exoplanet was found that might have multiple suns like those portrayed in Star Wars.

[2] I'm no more than an idle fan of the movies, but this isn't actually the first time I worked in a Star Wars reference into a scientific paper! Back in 2003, when Titan moved into view of the giant Arecibo radio telescope which made radar observations showing that Titan had large and improbably flat areas that might be best interpreted as seas, I wrote a commentary piece in Science magazine that drew an analogy with the climactic scene at the end of Episode 4 where the moon Yavin 4 drifted into the sights of the Death Star. Ironically, it seems that these flat areas may have been dry after all, but perhaps are the Titan-organic equivalent of the clay pans and salt flats seen in the Chott El Djerid...! 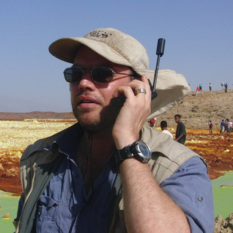