Initially the asteroid was incredibly faint and very low in the sky from our currently operating southern hemisphere telescope site at Cerro Tololo, Chile. We would have used our Siding Spring site but there had recently been very serious bush fires and the whole observatory site had been shut down. This week the asteroid was much easier to see because it was closer, and therefore brighter, but it was still very low on the horizon from Cerro Tololo. Fortunately Siding Spring had been given the 'all clear' and we managed to get some observations of the asteroid before it sank too far through the thick atmosphere at the horizon on 14th February. From this image sequence you can see that the sky seems to get brighter, washing out all the stars and the asteroid. This is partly because of the low viewing angle and partly due to some cloud on the horizon. 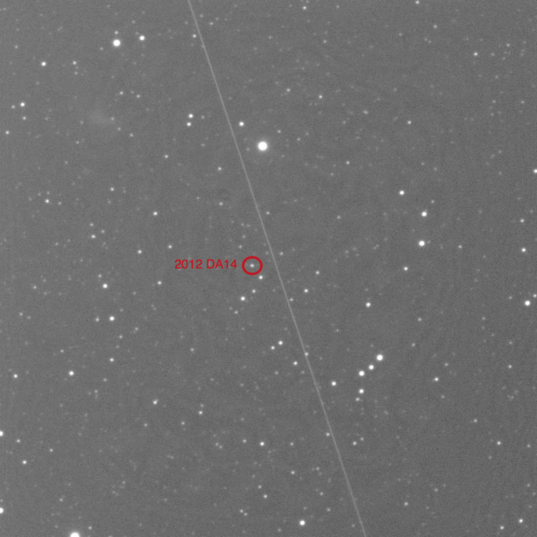 Asteroid 2012 DA14 and a satellite streak from Siding Spring Observatory

One of the great parts of working for Las Cumbres Observatory is being able to use robotic telescopes. These really make observing very straight-forward. Had I been trying to observe a relatively faint fuzzy blob whizzing across the sky with my own telescope I doubt I would have been able to see anything. One of the many strengths of robotic telescopes is the ability to respond quickly to observation requests, and reliably acquire targets. I could fine-tune the coordinates as my observing session progressed without needing to worry about my pointing accuracy or slewing time. I also benefitted from the robotic telescope data pipeline which cleaned up my image files automagically so I did not have to worry about dust doughnuts and hot pixels. The icing on the cake was that I could sit in my office with a mug of tea, quickly checking for the up-to-date coordinates of 2012 DA14 on the Minor Planet Center website, all during my day time. It is a slightly surreal experience to be able to switch between using telescopes in Chile and Australia without breaking into a sweat, or incurring massive airfares.

We took a few images but then lost the asteroid for that night as it vanished below the horizon.

Later that evening (whilst in the pub) I saw the image sequence I had taken had been made into an animation and featured on many news websites, including two of my favourites: NASA and Wired. I was so pleased that my observations had found their way around the World and were being used by many people to find out about this fascinating asteroid. Obviously the first thing I did when I saw that was call my mum and tell her to look at all those websites. She was less interested in them than I was but she was just as excited about it.

Friday was when 2012 DA14 comes closest to the Earth. At its closest it was about 27,000 kilometers away from the surface of Earth.  That is about twice the diameter of our planet, and about a tenth of the distance to the Moon. Once again I made myself a cup of tea and sat ready to observe. I had arranged with one of my colleagues, Tim Lister, based in California, for us to both observe the asteroid this morning. He was going to take the early shift and I would take the later one. Tim was particularly interested in using our newly commissioned spectrograph to give us some clues about the composition of the asteroid. This is a bit tricky because when the spectrograph is engaged you can no longer take pictures with the telescope. When your target is moving quickly, you have to be really sure you are pointing the telescope accurately or you might just end up with the spectrum of empty space.

During today's session the asteroid was trailing even in short exposure images. By the time we had finished our observing session the asteroid was moving so fast that we could barely keep it in the field of view long enough to snatch a couple of observations - 60 arcseconds per minute. At 11:30 UT we handed the telescope back to the other robotic observers, whereever they are in the world, for the many programmes which we provide observing time for. 2012 DA14 sped up during the night until it was travelling at nearly 1 degree per minute, making it very tough to image with large telescopes.

These images were taken between 09:53 and 11:28 on 15 February, and give a clear picture of how fast the asteroid was traveling.

I live in the United Kingdom and on the night of 15th February I took my binoculars in to my garden to see if I could glimpse 2012 DA14. It would have brightened enough to be visible which is impressive considering the asteroid is only 50m across. It approached Ursa Major at about 21:00 UT and should have been easy to see. Sadly the clouds rolled in 10 minutes before that, and because 2012 DA14 was moving so quickly it was too faint to see once they had cleared. It would have been a unique opportunity to observe an object by two different means, from two separate hemispheres in the same day, but I am very pleased to have seen it at all. 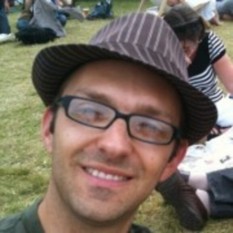 I woud assume in the video that you did not attempt to track the asteroid, and so the along-track elongation is just the asteroid's trail in your exposure time. At closest approach it might have been possible to get below 50 meters resolution - do you know if anyone tried to resolve it optically ?

I have the same question: are there no images showing any detail of DA14? I know it is only 50m but Hubble should have been able to see it at about 8 pixels across, at closest approach (and Hubble is in low earth orbit so should have got at least one good look at it near closest approach). The larger ground-based telescopes should have got maybe twice that. OK you would not see much surface detail, but enough to see if the object is spherical or elongated, and also whether it is tumbling. I am surprised if this was not of sufficient interest. Or was it just too fast to track perhaps?

Notes from a mere mortal. What a cool job you have!