The New Horizons science team is meeting this week, and Ted Stryk, who was invited to attend to present his work on Voyager images of Triton, sent me a report yesterday and this one from today. Triton is relevant to New Horizons because it is hypothesized by many to be a captured Kuiper belt object. Many thanks to Ted for these reports! --ESL

This morning, a major topic was the search for Kuiper belt object (KBO) targets. [New Horizons is planned to encounter at least one and as many as three small Kuiper belt objects following its Pluto encounter, but the ones it will encounter might not have been discovered yet. --ESL] There is only one known KBO currently being considered. It has a radius of about 30 kilometers and is magnitude 25.3. The problem in finding targets is that Pluto is passing through the galactic plane, meaning that the background star fields are extremely dense. Searchers are using the Subaru telescope to look for objects against the dark nebulae that block out many of these stars, but it is difficult to track the objects they find once they are no longer in front of the dark nebulae. Right now they are using Subaru's "Suprime" array of 10 CCDs for their search. By the end of the year, a new camera, "Hyper-Suprime," should be available. It has an array of 116 CCDs, each of which covers the same area as the individual CCDs in the original Suprime. This will help to quickly search much more sky (and take images that are a whopping 2 gigabytes each). Unfortunately they did not provide the specific field of view of these instruments.

Meanwhile, another team is looking for KBO targets and is using the dense star fields to its advantage, using the Hubble Space Telescope Fine Guidance Sensors to look for occultations and then trying to recover any occulting objects. They have already had one success, but it is 14 degrees out of the ecliptic.

The team is also using Suprime to look for Neptune Trojans that New Horizons can observe when it passes through Neptune's L5 point in 2014. None are known because no one has looked for them, but they theoretically should exist. Even if they are found, New Horizons will most likely not be able to resolve them as anything more than one pixel. New Horizons might at least provide phase curve data. It would take a huge stroke of luck to get anything better, since actually targeting one of these objects would mean diverting the trajectory away from Pluto. There was also an attempt to recover the potential Himalia ring, but this was not successful. [Note: The Lunar and Planetary Science Conference abstracts were posted today, and they include this one explaining the Himalia ring (PDF format). --ESL]

There was a paper showing New Horizons' results as it flew down the Jovian magnetotail, the first spacecraft to do so. 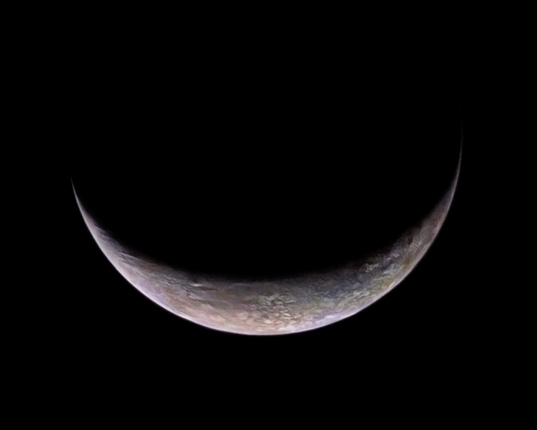 This unusual crescent view of Neptune's moon Triton is composed of several frames captured by Voyager 2 as it sped away from its August 26, 1989 encounter. The view combines data taken from three different distances as Voyager receded.

Dale Cruikshank attempted to look for evidence of methane on Triton in spectra taken in the 1940s by Gerard Kuiper. Unfortunately, an observing assistant -- "Brown" (his first name is not recorded) -- apparently obscured the portion of the spectrum where methane would appear with a fingerprint, rendering it useless. Cruikshank pointed out that this is likely why we haven't heard of "Brown." However, recent spectra taken with Akari, a Japanese space telescope operating in the red, clearly shows evidence of methane and of HCN. The HCN is thought to be produced in the atmosphere. Spitzer and Voyager's infrared instrument are not sensitive to the band observed. This band shows reflected sunlight, not thermal emissions.

I presented my results from reprocessing Voyager Triton imagery. For details about this, please see the blog entry I wrote in spring 2009.

Will Grundy showed spectroscopic work indicating that methane, while present globally on Triton, is concentrated in a spot at about 300 degrees longitude and likely in the mid-to-high southern latitudes. This corresponds to a unique pink spot in Voyager data.

Francesca DeMeo showed recent evidence she has obtained showing ethane to be present on Pluto. It appears in multiple datasets and is significantly above the signal-to-noise ratio. Several people presented atmospheric results from occultations, showing that the atmosphere has greatly increased in pressure since the first good occultation observation in 1988. There are two good occultations this year, the first on Valentine's Day and visible from Europe, and the second, on July 4th, will be visible from South America and Africa.

This is definitely one of the most exciting missions in the history of planetary exploration, and we can all look forward to many discoveries to come!