The New Horizons science team is meeting this week; today was the fourth anniversary of New Horizons' launch toward Pluto. She's come a long way since launch, but she's got a long way to go until her 2015 flyby of this bright little world in a dim part of the solar system. Ted Stryk -- whose beautiful image processing work you've seen me feature here very often, if you're a regular reader -- was invited to attend the meeting, and he sent me the following notes from the first day; here's his report from the second day. --ESL

The New Horizons science team is presently holding its annual meeting at the Applied Physics Laboratory in Laurel, Maryland. The spacecraft, half way to Pluto, celebrated its fourth year since launch today, and event that was celebrated with a cake. 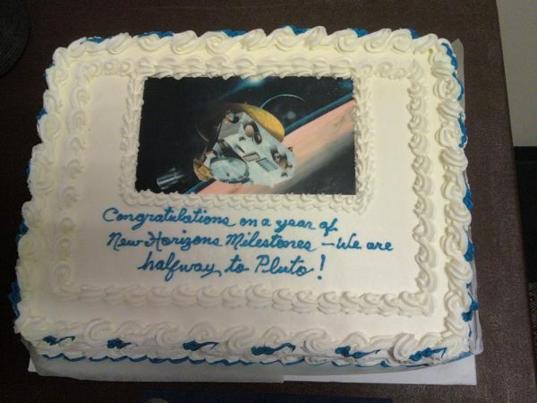 Principal Investigator Alan Stern announced that the flight rehearsal has been moved from 2012 to 2013 to allow more time to prevent mistakes. So far all is well, and fuel consumption is less than expected and the RTG [New Horizons' power source] is performing well.

The fields and particles folks presented first. The SWAP team showed data demonstrating that the number of galactic cosmic rays increased from 2006 to 2008 and is still increasing due to the recent period of unusually slow solar activity. It may take a full solar cycle of normal activity for this to return to normal. The PEPSSI team reports that the ratio of 4:1 of inward- to outward-bound ions continues out to at least 10 AU, which was unexpected due to the increasing distance from the sun.

Most significant is the work done by PEPSSI in conjunction with IBEX. The data indicate that the heliosphere is spherical. If this is true, it overturns the earlier model, which held that it was compressed one side with a tail on the other.

What was originally thought to be stray light in the LORRI images of Jupiter's moon Himalia are now thought to be a possible ring, of which Himalia would be the source. Regardless of camera angle, the ray of light was always observed to be consistent with the orientation of Himalia's orbital plane. Observations this summer may confirm this, when New Horizons will take a three-frame mosaic of the Jovian system. Cassini images were taken from an unfavorable illumination angle and are not useful for investigating the question of whether Himalia is associated with a ring.

Each year, New Horizons does an active checkout ("ACO"), during which it performs tests and takes cruise science data. During 2009, it did a "slim ACO," in which it never attained 3-axis stabilization order to conserve fuel. [When New Horizons is not 3-axis stabilized, it rotates slowly in order to maintain stability.] It will do the same in 2011 (which will also include a lunar occultation). This year will be a full ACO, and 2012 will begin the first partial encounter sequence tests.

The team has developed a basic encounter sequence, including a list of the most critical data to be returned at 27 hours and 36 hours after Pluto closest approach. (Because it doesn't have a scan platform, New Horizons can't make observations and take data at the same time, so we have to wait until some hours after closest approach to get the first data.) [That wait is going to be one of the hardest in my life. --ESL] While limited, with some basic coverage from each instrument, if this is all the data they ever get back from the spacecraft, it will at least be better than the data returned from a single Galileo orbit. They are also working on contingencies in the event of a LORRI failure, with imagery carried out with MVIC and possibly the star trackers. (To be clear, a LORRI failure is extremely unlikely).