Such a Pretty Planet; It’d Be a Shame if Anything Happened to It

“Oh, hello, Mars,” I spoke to the giant screen, fondly.

And then Mars blew up. 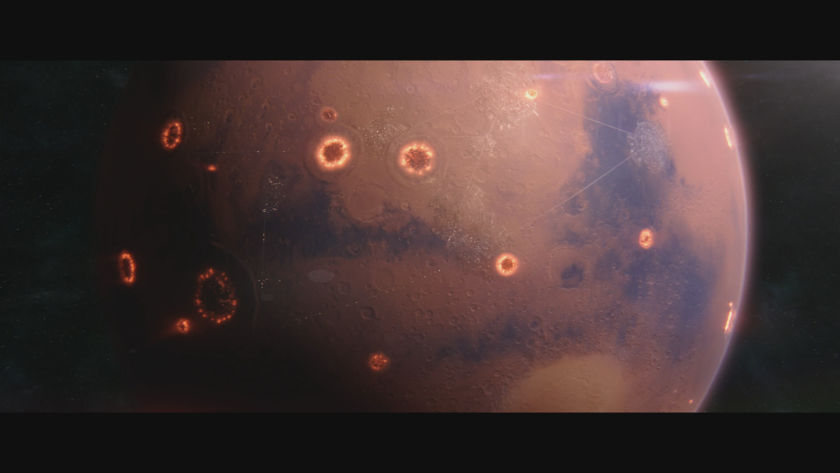 In a scene from Star Trek: Picard Episode 3, "The End Is the Beginning," it's a bad day on Mars. Something is happening above settlements spread across Arabia Terra and Meridiani Planum, and an in a settlement on the plains between Cassini and Flammarion craters.

Mars was demoted from planetary status in Star Trek: Picard, a series that picks up the life of my favorite (ex-)Captain after he’s retired to his family château with a household staff composed of Romulan (ex-)secret police. I was there as the guest of my friend Swapna Krishna, who’s writing the recaps of the episodes at startrek.com and reviews elsewhere. I really enjoyed the first 3 episodes; the story is interesting and mysterious, the special effects stellar, the cast terrific. Only the costumes were disappointing, and I have Opinions about how Jean-Luc Picard (played with all the gravity you’d expect from Patrick Stewart along with a surprising honesty about how old both Stewart and Picard are) treats his former assistant and protégé Raffi Musiker (Michelle Hurd), but this article isn’t supposed to be about those parts of the show, it’s about Mars, before it blows up.

CBS screened the first 3 episodes of Picard at the enormous Cinerama Dome at the Hollywood Arclight Cinema on 15 January. Sometimes, the IMAX screen was too big for the close-up scenes of what is, after all, a television show, but at other times the show was plenty cinematic. In particular, all of the first 3 episodes open with orbital views of Mars. And they were instantly recognizable. Not just as in – hey, I get that this is supposed to be Mars, but – hey, I know that place and that place, and there’s Schiaparelli crater which means Opportunity landed right there to the left and – oh no, Mars blew up again.

(They blow up Mars at the beginning of every episode just to remind you that Mars blew up. It’s great.) 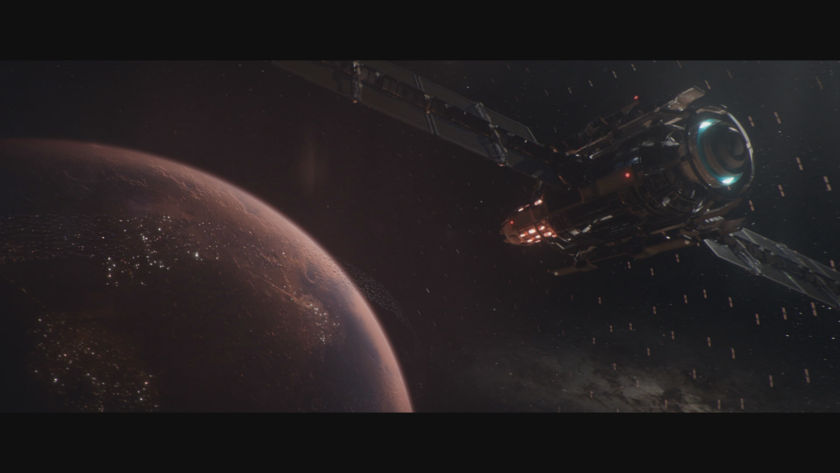 A scene from Star Trek: Picard Episode 2, "Maps and Legends," in orbit over Mars.

When the screenings were over, I left with an enormous feeling of pride that our spacecraft and the scientists and engineers who work on them have produced maps and images of such quality that an entire simulated planet, spread out on the vast expanse of an IMAX screen, can be so instantly familiar. Well done, Mars community.

I needed to find out more about the process by which the visual-effects artists produced those scenes, and how they were so instantly recognizable. Did they actually use a topographic data set and a 3D model?

I was granted an interview with visual effects supervisor Jason Zimmerman, and I asked him. It turned out to be more traditional art than engineery simulation, just working from great images of Mars (“Google is always a visual-effects supervisor’s best friend,” he said, and I laughed, not admitting that it’s a science writer’s best friend, too). He went on to explain that what makes the images so realistic is an attention to the details that aren’t necessarily visible. “Ultimately, those fine details that you may not necessarily see probably will be represented somehow in the texture that you would see in a wider shot.” Which is super, because what’s helped scientists understand Mars so much better now than we did 20 years ago is how we have all these overlapping data sets that document the planet at every scale from global to the extremely local, and clearly the same thing has benefited space artists.

For Zimmerman, making Mars so realistic was important to please fans. “In Star Trek, we really do try and honor the science of things because I think the fans specifically do care about those things, maybe more than some other sci-fi franchises. It’s a little daunting because it’s something that people know. So for us it was really just about doing a ton of research. As much as we could find—realistic images, photos, recreations and all of that, and then piecing it together to create the most faithful representation that we could. We definitely wanted Mars to be recognizable, and to be faithful to what it was supposed to look like based on NASA and everybody else that’s got pictures and recreations of it.” 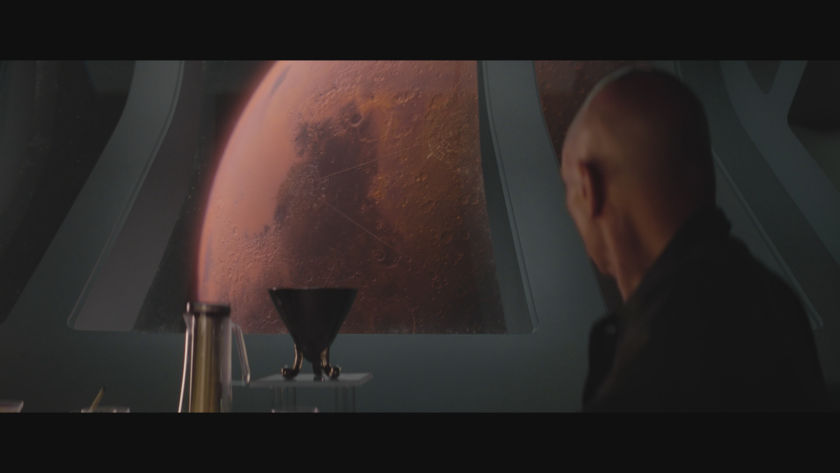 In a dream scene from Star Trek: Picard Episode 1, "Remembrance," Jean-Luc Picard looks out the windows of the Enterprise-D Ten Forward lounge at Mars. Perhaps befitting a dream sequence, Mars is mirror-reversed; Syrtis Major is the dark splotch at center with a settlement superimposed, and the flat plain of Isidis is to the left (Isidis is actually east of Syrtis Major).

He did mention several times that it’s important to get physics and settings in Star Trek as believable as possible because fans (including Trek fans on his own visual-effects team) will “hold you over the fire” if you don’t. But it’s not just fan pedantry that’s pushing these accurate views; Zimmerman loves bringing all we’ve learned from real space exploration in to Trek visual storytelling. “It’s mind-bending to know how much information we’re able to glean now. Twenty years ago, when I started, people just had to piece things together as best as they could from library books and things like that. It is really cool to have the science to back it up. And knowing what we know now, how do I actually depict that on camera? That’s a fun challenge to have to come to work each day with.”

Zimmerman was very gratified to hear that I thought he’d done well with Mars. “I'm just I'm so honored and flattered that our depiction of Mars was something that resonated and actually had some accuracy to it, because that is something that's important to us, something that we definitely strive for. It’s good to know that our efforts are headed in the right direction, and we can continue the process.”

I don’t think I told him enough times how tickled I am that his team created this stunningly realistic view of Mars, and then they blew it up.

Episodes of Star Trek: Picard are released on Thursdays on CBS: All Access for U.S. audiences and Fridays on Amazon Prime Video for other audiences. The first season has 10 episodes, and it has already been renewed for a second season.

Zimmerman’s responses have been edited for clarity. Extra thanks to Swapna Krishna for helping me identify details in the screen captures.

Star Trek: Picard gets a thumb up. Does this mean you (Emily) will be review sci-fi shows to come? This could be the start of a whole different occupation in the Planetary Society, make it so.