What to Expect When InSight Lands on Mars

If all goes well, anxious space fans on Earth will learn of a successful InSight landing on Mars on Monday, 26 November 2018, at 19:53 UTC. As with all Mars landings, no one who is watching will be able to do anything to affect the outcome; all we can do is wait and hope everything works. JPL shared a great video featuring Mars landing engineer Rob Manning explaining how everything works. Here, I made you an infographic to follow along with the action. 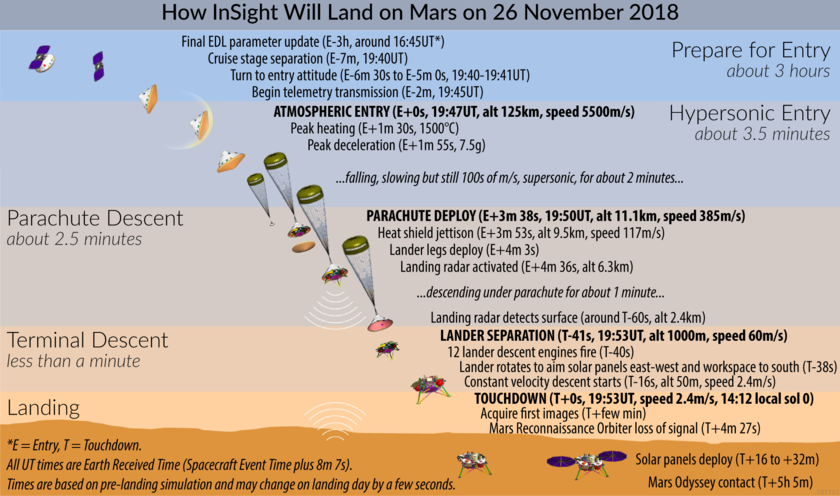 Advance predictions for the details of InSight's landing made several weeks beforehand. Adjustments to the trajectories of InSight or Mars Reconnaissance Orbiter may change these times by up to several seconds, as could weather on landing day. All times include 8.1 minutes of one-way light time delay (accounting for the time it takes signals to travel from Mars to Earth). Abbreviations used in the labels: EDL = entry, descent, and landing; E = entry; T = touchdown; h m s = hours, minutes, and seconds; UT = Universal Time (subtract 8 hours for Pacific, 5 for Eastern, add 1 for European time, add 8 for Japan). Revised 15 November 2018 to correct an error in InSight's atmospheric entry speed.

InSight’s will be a throwback landing, simpler than Curiosity’s and identical to Phoenix's. It will employ heat shield, parachute, and landing rockets, but no fancy entry guidance or Skycrane maneuver. Even if it’s simpler, it’s still terrifying, a period during which decades of work comes down to minutes of automated maneuvers that’ll transform a space-faring flying saucer into a sessile lander.

It all unfolds at a world that’s 8.1 minutes away from us by light speed. By the time we on Earth receive a signal that tells us InSight has sensed the atmosphere, it’ll all be over, one way or another, up on Mars. (Those of you who are about to “actually” me about the illusion of simultaneity: please resist the urge.)

From the moment that InSight hits the top of Mars’ atmosphere to the moment that its legs touch the ground, just 6 minutes and 45 seconds will elapse. Long-time observers may notice that this is slightly less than Curiosity’s “7 minutes of terror.” (Actually, Curiosity's landing took a total of 7 minutes and 12 seconds, a fact I just looked up in my book.) There are two reasons InSight’s descent will be a little faster. For one thing, Curiosity used a smart guided-entry system that could steer to level out its flight, adding to its time spent in the atmosphere; InSight’s landing is ballistic. For another, Curiosity landed in a deep hole, a spot more than 1800 meters lower than InSight’s landing site. Curiosity’s landing elevation was 4,501 meters below the Martian mean; the center of Insight’s landing ellipse lies at 2,655 meters below mean. Mars doesn’t have a sea level, so after the Mars Global Surveyor mission measured Mars’ topography, scientists defined zero elevation on Mars as an average planetary radius of 3,396 kilometers. All landing sites have been below this elevation because heat shields and parachutes need as much atmosphere as they can get to slow down incoming spacecraft.

Here is a detailed timeline of the anticipated events at Mars, reproduced in a variety of time zones. All of these times are Earth received time, which means they’ve had 8 minutes 7 seconds added to spacecraft event times to account for how long it will take signals to traverse the space separating Mars from Earth.

There are several ways we’ll be able to receive InSight’s radio signals to find out how the spacecraft is doing. Mars Reconnaissance Orbiter will record data for later replay, but there are a few real-time listening methods. None of the real-time methods is as certain to work as the record-and-decode later method -- but we’ll probably get some real-time information, one way or another.

(Note: When I talk about “real-time” here, what I actually mean is “spacecraft time plus the 8.1 minutes it takes radio signals to travel from Mars to Earth.”)

If we’re lucky, the MarCO CubeSats will receive InSight’s radio signal directly, decode it, and retransmit it to Earth using their stronger antennas. This “bent-pipe” relay could give us great detail on the spacecraft’s understanding of its health and the progress of the landing. 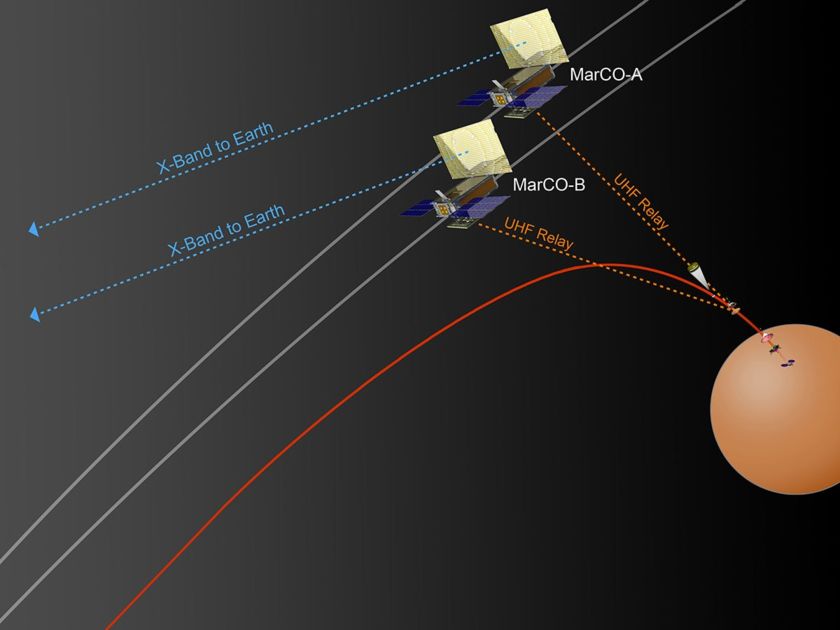 MarCO will relay data from InSight to Earth during InSight's descent through Mars' atmosphere and touchdown on the surface.

Even if the MarCOs don’t work, we’ll still have a way to get real-time information. Any radio communication uses a carrier signal at one specific frequency, then wiggles that signal in some way in order to transmit information. It’s easier to detect a carrier signal than it is to detect the little modulations of the signal. The carrier signal from InSight will be detectable from Earth using large radio telescopes (specifically, Green Bank Observatory in West Virginia and the Max Planck Institute for Radio Astronomy’s Effelsberg, Germany facility), but the modulations on top of that carrier signal are too weak to be detected across such a great distance.

What can we learn in real time by detecting InSight’s carrier signal from Earth?

So while I’d like the MarCO satellites to work, and I hope they work, I know we’ll get enough information to follow even if the MarCO connection doesn’t work. Assuming, of course, that everything on InSight works as planned!

When Will We Get the First Images?

There are two cameras on InSight, one (the Instrument Context Camera, or ICC) designed to view the workspace in front of the lander, and one (the Instrument Deployment Camera, or IDC) attached to the arm. Within minutes after landing, the workspace camera will take a photo. The lens cover will still be on, so the photo will be covered with dust blotches from the stuff kicked up during landing. An hour-ish later, some time after the solar panels have been deployed and the lens cover opened, the same camera will take another photo. (This much was confirmed for me by JPL Public Affairs.) If history is any guide, the first image to be returned will be a thumbnail of the lens-covered one at a quarter of the original resolution, a little file 256 pixels square. It’s not a lot of data, but it’s lower-priority than other kinds of data that the spacecraft will be sending to Earth, so mission managers can’t be certain it’ll get transmitted right away.

The landing press kit does a great job explaining the uncertainty around how and when we’ll receive that first picture, so I’m just going to copy and paste all that text here:

The lander has been programmed to take its first images several minutes after touchdown. The transmission of these images back to Earth will take longer. Engineering data are prioritized above images so it’s possible that only part of an image (or none at all) will be transmitted in the first hours after landing. The image could be transmitted at various times via MarCO, MRO or Odyssey.

How InSight’s First Images Could Be Returned to Earth:

Thank you for the rundown and especially for including East Coast times in your table!

Right during lunch at my high school for optimum viewing in my science classroom. Thanks JPL!

Emily wrote "As long as InSight’s transmitting, we know it’s alive and not crashed or burned up. The contrapositive is not true, however." That is a truly remarkable statement calling into question the entire mathematical foundation of space exploration. ;)

A little note: the entry sequence suggested by the image is wrong. After Phoenix mission, the standard EDL sequence has been changed: the cruise stage separation is performed BEFORE entry turn, in such a way cruise stage and lander are placed on different trajectories, thus preventing recontact. During Phoenix mission it was calculated a minimum distance of 6 meters between lander and cruise stage if separation occurred after entry turn. This is the correct sequence: http://win98.altervista.org/space/exploration/insight/EDL-fixed2.png Comparison between old and new sequence: http://win98.altervista.org/space/exploration/insight/EDL-change.png --------- I prepared this EDL simulator based on Phoenix EDL data, have fun1 :-) http://win98.altervista.org/space/exploration/insight/insight-edl-simulator.html

As always, Ms. Lakdawalla, an excellent encapsulation. And as always, I am grateful for your great science communication efforts! One of the instruments on InSight is the Heat Flow and Physical Properties Probe (HP3). As a field geologist, I would be interested to learn how the probe "hammers" or "burrows" (NASA uses both terms) three meters into the subsurface. I am guessing some kind of electric percussion hammer, like a tiny, 6-pound jackhammer, but I am probably wrong. Can you refer me to more information about the HP3? Thank you again.

Yes, I really would like to know it too: how/where are 5 meters of rod stowed, and how will the be inserted in rocky gorun? Can the insertion point be changed once started?