Both OSIRIS-REx and New Horizons achieved first light on their still-distant targets this week. These views of tiny worlds aren't particularly impressive photographs, but each signals the transition from cruise phase to scientific exploration of objects that have, up to now, been mere points of light. Between now and the end of 2018, Bennu and 2014 MU69 will become places, worlds with geology and history recorded in their rocks.

On 17 August 2018, OSIRIS-REx obtained the first images of its target asteroid Bennu from a distance of 2.2 million km, or almost 6 times the distance between the Earth and Moon. This cropped set of five images was obtained by the PolyCam camera over the course of an hour for calibration purposes and in order to assist the mission’s navigation team with optical navigation efforts. Bennu is visible as a moving object against the stars in the constellation Serpens.

And here is New Horizons' first look at MU69: 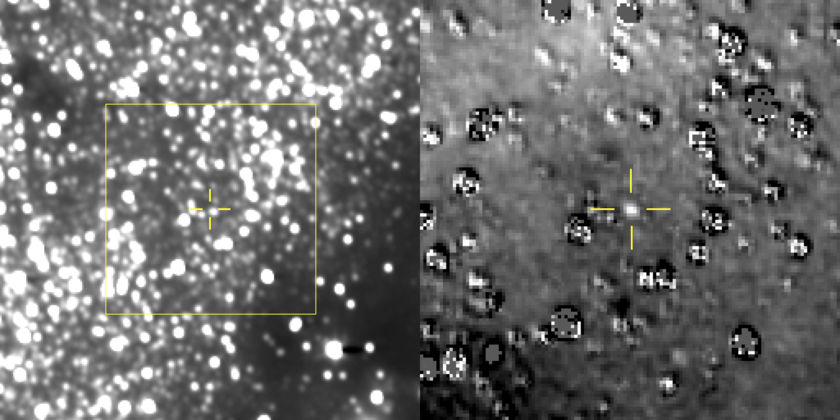 On August 16, 2018, New Horizons used its Long Range Reconnaissance Imager (LORRI) to take 48 photos of the spot in space where navigators hoped to spy 2014 MU69. Each exposure lasted 30 seconds, the longest possible with LORRI. The left image merges those 48 photos. The predicted position of the Kuiper Belt object is at the red crosshair at the center, just above and to the left of a nearby star that is approximately 17 times brighter. The right image is a magnified view of the region in the yellow box, after subtraction of a background star field "template" taken by LORRI in September 2017 before it could detect the object itself. 2014 MU69 is clearly detected in this star-subtracted image and is very close to where scientists predicted. At the time of these observations, 2014 MU69 was 172 million kilometers from the New Horizons spacecraft and 6.5 billion kilometers from the Sun. The star that appears practically on top of 2014 MU69 is 4.56 kiloparsecs away.

When I last wrote about New Horizons in January, I described the LORRI software improvements that enabled the 30-second exposures that, in turn, enabled them to spot MU69 so far out. (Skip down to the header on "New Horizons' timeline for 2018..." to learn about that.) Congratulations to the team for making this difficult observation work!

Both of these images contain the same good news: Bennu and 2014 MU69 are quite close to the locations that we expected them to be. This is a vindication of the hard work of the astronomers who discovered and tracked the objects and predicted their future paths. It's also great news for the missions' navigators, who find themselves right on course toward their eventual destinations. Steady as she goes!

The next four months are going to be super for both New Horizons and OSIRIS-REx, especially December. Both mission teams will be getting their first science results from small worlds at the end of 2018.

Apart from their coincidence in timing, the two missions couldn't be much more different. New Horizons is much farther from its target -- in fact, it's about 100 times farther away from MU69 than OSIRIS-REx is from Bennu. New Horizons is also closing the distance at much higher speed. Consequently, MU69 is really just going to be a dot right up until the final moments before the New Year's Day flyby, and then New Horizons will zip on past; all the good science data (including the really good views of MU69 as a world) will come from a 48-hour period of observations, and it'll take weeks to return those best observations to Earth.

By contrast, OSIRIS-REx is closing the distance much more slowly, because unlike New Horizons, its goal is to brake to a relative speed of just about zero when it finally enters orbit at Bennu at the end of this year. It'll be the first space mission to orbit such a tiny world; Bennu is far smaller than Churyumov-Gerasimenko.

Beginning around October 15, we should be able to see the asteroid grow slowly in OSIRIS-REx's viewscreen. For more detail on what to expect from OSIRIS-REx, check out this June blog post.

The sportier Hayabusa2 will already have dropped several rovers on Ryugu by then. It's a small-body mission bonanza!

Thanks Emily for the great news update and congratulations to the for successes so far and also for the astronomers for doing 1st grade accurate tracking of this "pin tip" point of light that the spacecraft is now approaching. Mind boggling math going all the way out to the needed decimal range to make this happen! Ouch! LOL!!! Astro-navigators have a non-forgivable error job. That far out, once you miss, you can't turn around and go back. One day we'll be able to but not now. So you future astro-navigators, please don't complain about 'how hard' your job is. You'll have the spacecraft power to correct it. Your predecessors don't. : ) Smile! I'm correct, your predecessors are correct and you all know it! : )

Well, at least we know that they're headed in the right direction. Good Show!...and oh yeah, didn't they start calling MU69 "Ultima" recently? We should start doing that too.

Why can't the New Horizons crew use this technique to look for future targets? It seems to me the only requirements would be a series of photographs within the "cone" of possible future travel - then send all those pictures back to Earth for processing.