This week is the annual American Geophysical Union (AGU) meeting, an overwhelmingly large gathering of people who study the physics of planets, mostly Earth but also all the rest of the solar system. As of today, 22,500 people have registered for this meeting. Check out the size of the poster hall:

Reporting from the #AGU17 poster session! This is the vastest poster hall I’ve ever beheld. pic.twitter.com/BMdrqO8KWI

I'm here for two days to cover Juno, Cassini, Curiosity, and one Earth-as-a-planet session. I'm taking notes for longer posts that I'll get to later this week, but thought I would share a brief news item from yesterday: Juno has obtained some surprisingly good images of bright spots showing volcanism on Jupiter's moon Io, which are nicely complementary to work being done from Earth. I wanted to post about this because all the Io scientists I've found at AGU were completely unaware of these observations and didn't see the talk. So Io fans, a call to action: go find the JIRAM team today!

What's JIRAM? Most of you know about JunoCam's lovely images of Jupiter. JIRAM is a scientific imager on Juno. It doesn't take pictures in visible wavelengths, and it doesn't take them in high resolution. Instead, it's an infrared imaging spectrometer. It has far fewer pixels than JunoCam, but each pixel in a JIRAM image is a spectrum, a detailed measurement of how much energy is radiating from the target in wavelengths at which Jupiter -- and Io -- glow with heat.

Unfortunately, unlike JunoCam, whose images are all instantly public, JIRAM is a scientific instrument with the usual proprietary period, and the JIRAM team hasn't released many images. None of them are of Io. There actually is publicly released JIRAM data in NASA's Planetary Data System, and now I'm excited to dig into the data set. I pulled out one image at random, and it shows how JIRAM sees Jupiter: bright areas are Jupiter glowing with heat from within, and dark areas are high clouds blocking that radiation from view. At Io, JIRAM sees the difference between the dayside and the nightside, and it sees maybe two dozen active volcanoes glowing with heat.

I had a look through our image library for Io images, and the one that looks most like the Juno JIRAM images is the New Horizons LEISA image, below right. I think that JIRAM had somewhat better resolution, and they were also able to clearly discern volcanoes on the sunlit as well as the night side of Io. In his talk on the images, Alessondro Mura explained that the particular geometry of Juno's orbit means they can't see the moons too often, and when they do, they have polar views. He also showed that the JIRAM team is trying to match bright spots with known volcanoes. I hope very much that they can work with Io activity experts like Julie Rathbun or Rosaly Lopes or Katherine de Kleer to add the JIRAM observations in to all the great work that's being done from Earth! 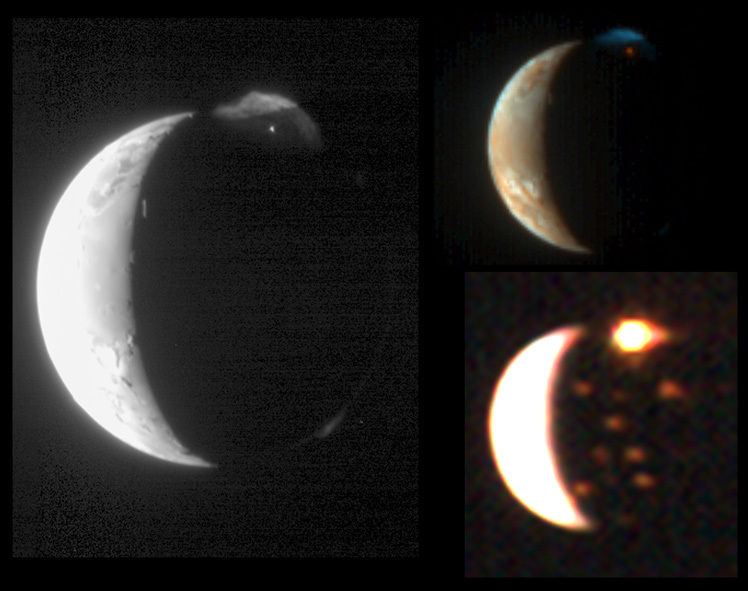