The European Space Agency posted several articles this morning about the plans for the end of the Rosetta mission scheduled for September 30, just three weeks from now. On September 29, a rocket burn will essentially cancel out Rosetta's orbital motion around the comet, initiating a free fall from an altitude of 20 kilometers. The spacecraft will impact the comet at a speed of about 90 centimeters per second at 04:20 PDT / 07:20 EDT / 11:20 UTC / 13:20 CEST, give or take 20 minutes. Upon impact, the spacecraft will automatically "passivate," cutting the radio connection to Earth and ending the mission forever. (Why does the mission have to end? Read ESA's FAQ.) 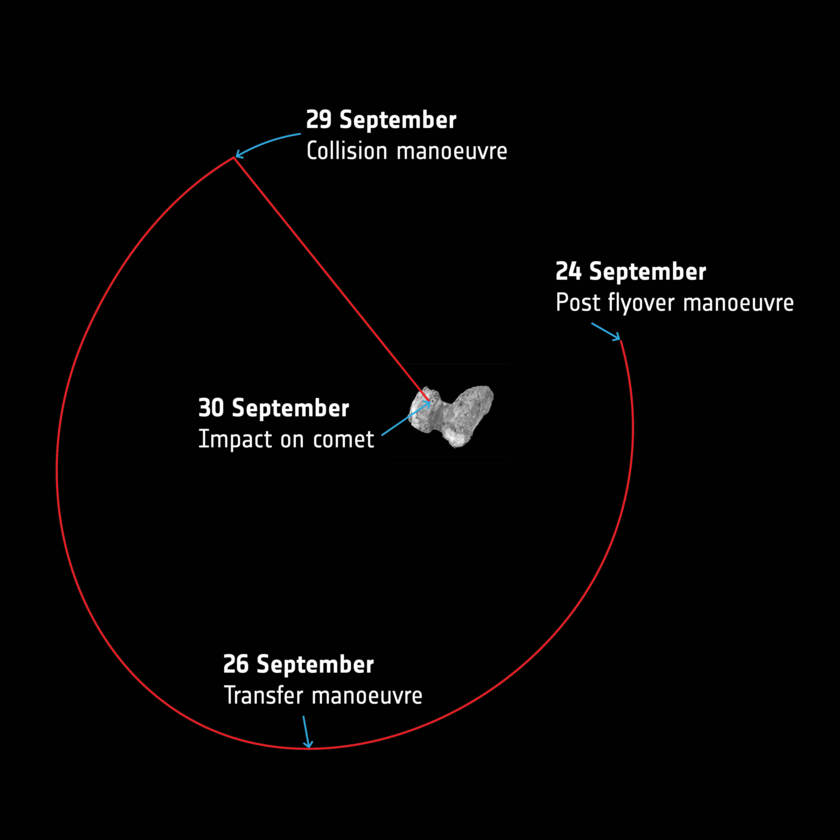 A simplified overview of Rosetta’s last week of maneuvers at Comet 67P/Churyumov–Gerasimenko (comet rotation is not considered). After 24 September the spacecraft will leave the flyover orbits and transfer towards an initial point of a 16 x 23 km orbit that will be used to prepare for the final descent. The collision course maneuver will take place in the evening of 29 September, initiating the descent from an altitude of about 20 km. The impact is expected to occur at 10:40 UTC (±20 minutes) at the comet which, taking into account the 40 minute signal travel time between Rosetta and Earth on 30 September, means the confirmation would be expected at mission control at 04:20 PDT / 11:20 UTC / 13:20 CEST (±20 minutes).

They have targeted a landing site in the Ma'at region on the "head" of the comet, in a flat area adjacent to a pit from which Rosetta has seen cometary activity. During the descent, they hope to observe at very high resolution the "goosebump" structures in the wall of the pit that they think may be a record of how the comet formed by accretion of smaller cometesimals. The team has named the pit Deir el-Medina for its resemblance to the Egyptian archeological site. Deir el-Medina is the site labeled "Ma'at_02" in the image below. Simulations of the landing suggest they should be able to touch down in that flat area between the sites marked "Ma'at_02" and "Ma'at_03" (within a region 500 by 700 meters in size).

Pits Ma’at 1, 2 and 3 on Comet 67P/Churyumov–Gerasimenko show differences in appearance that may reflect their history of activity. While pits 1 and 2 are active, no activity has been observed from pit 3. The young, active pits are particularly steep-sided, whereas pits without any observed activity are shallower and seem to be filled with dust. Middle-aged pits tend to exhibit boulders on their floors from mass-wasting of the sides. The image was taken with the OSIRIS narrow-angle camera from a distance of 28 km from the comet surface on September 12, 2014. From left to right the pits measure 125 m, 130 m and 140 m across and are 65 m, 60 m and 50 m deep, respectively. 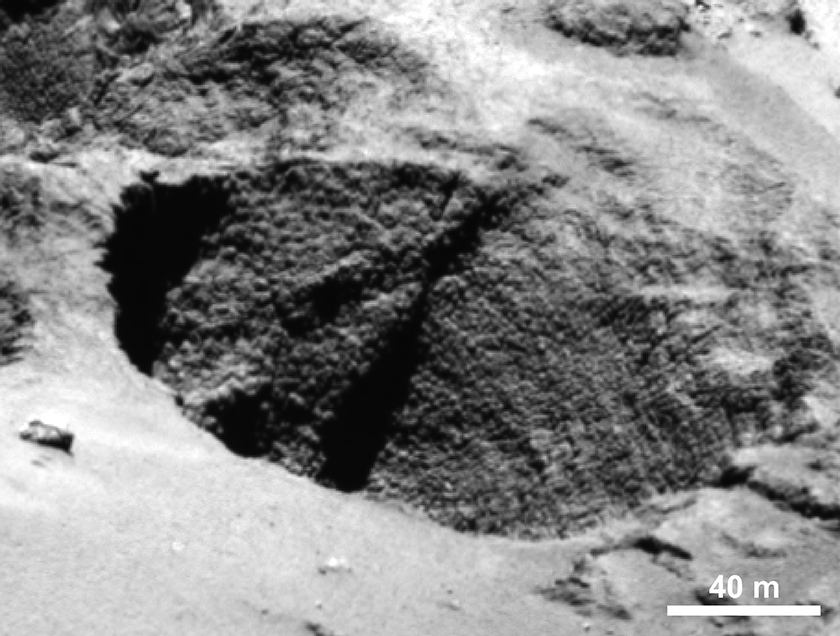 Where exactly is this on the comet? I find it really difficult to orient myself on the double-lobed and craggy-shaped Churuymov-Gerasimenko, but the two deep Ma'at pits are actually relatively straightforward to find. First, look for an image of the comet in which it looks like a small animal (perhaps a capybara). The Ma'at pits are the dots on the left upper lip, maybe where whiskers would be rooted. (Or perhaps our space rodent has reptilian heat-sensing pits on its schnozz.)

Not sure what kind of monster Churyumov-Gerasimenko is, but it's kind of cute. Bulldoggy-gopherish thing. pic.twitter.com/iMQDjTjoFO

If you consider the comet to be "upright" when looked at this way, the "three pits" image at the top of this post is "upside down." Thus oriented, I went through some of the Rosetta data archives and found a few views of the pits under different lighting conditions. Here's one that orients you to the comet and allows a peek at the floors of the pits. 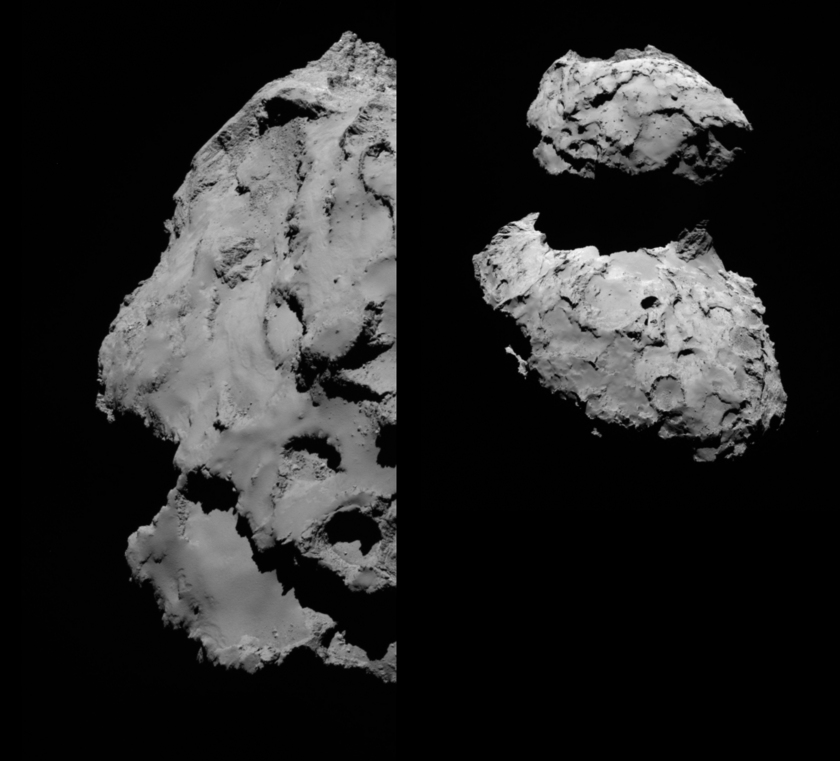 Two views of the prospective Rosetta landing site in the Ma'at region of comet Churyumov-Gerasimenko, taken with the wide-angle (right) and narrow-angle (left) OSIRIS cameras taken on August 30, 2014. The relatively high angle of the Sun allows a view into the bottoms of two prominent pits, each about 100 meters across, one of them shallower than the other. The shallower one has debris on its floor; this is Deir el-Medina. The planned landing site is to the upper left of Deir el-Medina in this view.

In this view, the pit floors are shadowed, but the low lighting picks out interesting texture in the "flat" region in which Rosetta plans to land. 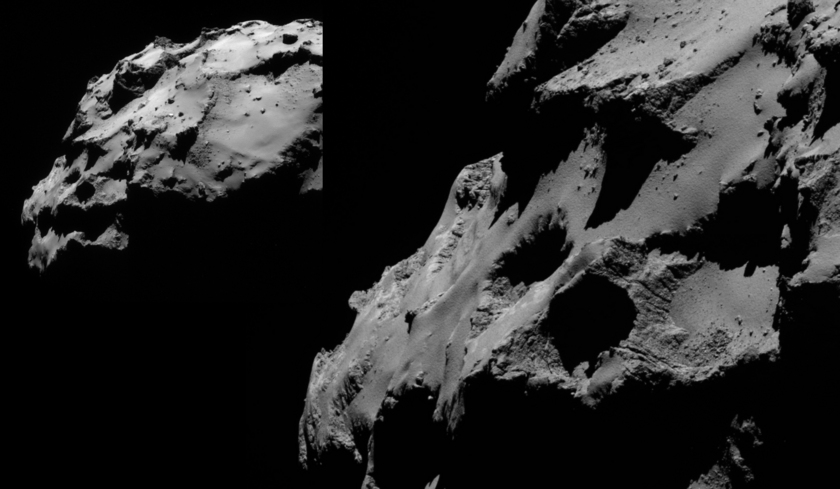 Two views of the Rosetta landing site on the Ma'at region of comet Churyumov-Gerasimenko taken by the Navcam (left) and OSIRIS narrow-angle camera (right) on November 11, 2014. With the low sun angle, the interiors of the two prominent circular Ma'at pits are hidden, and a hint of texture can be seen in the smooth areas outside the two pits. The upper left pit is Deir el-Medina. The prospective landing site is to the let of Deir el-Medina in these images. The pits are about 100 meters across.

Finally, here's an oblique perspective, providing a better view of the textures on the walls of the pits.

Views of the Rosetta landing site onto pit walls

An OSIRIS wide-angle camera view of the head of comet Churyumov-Gerasimenko, with a perspective onto the interior walls of the two prominent pits of the Ma'at region. The most easily visible pit in this view is Deir el-Medina. The proposed landing site for Rosetta is to the lower left of Deir el-Medina in this view.

I'm sure there are much better views in the archives. I pulled these from my own Rosetta image data pages, but the Rosetta mission has released much more data since I made those. If you find other great views of the landing site, please post them in the comments!

Hi Emily, the image pit showing the "goosebumps" is from another area: It is the Seth_01 pit, the deepest on the comet. It is located in the Seth region, on the edge of the Aswan plateau, close to the "neck" of the comet. Here is a link to the paper describing all these pits: http://www.nature.com/nature/journal/v523/n7558/full/nature14564.html Now, the pits in Ma'at are smaller, but also show a bumpy/fractured texture on their walls and it will be very exciting to land there !

I have formed the view, after much analysis, that the ESA is unnecessarily wasting a billion dollar craft. There is many measurements, including the sniffing of plumes at very close distances that are impossible with the current plan but can happen with an alternative plan. We feel that the Rosetta craft should be put into hibernation and donated to the international Astronomical community as the way to end the ESA's commission regarding the spacecraft. In this way, the ESA is removed from any funding obligations in any future use of this craft, but the craft will be available for reacquisition by volunteers and crowdfunding. Even if it never happens or reacquisition fails, nothing is lost with this plan. The detailed outline of this alternative plan, including fly by parameters and all the advantages and calculations are in the following link. https://scute1133site.wordpress.com/2016/09/01/part-59-the-dare-devil-apis-flyby-escape-and-2020-reacqusiton/ Of course, I do not expect the leadership of the Rosetta team to listen to me, or answer why not?

I'm fully in aggreeance, Marco. ESA's "explanation" for why Rosetta has an EOM at all sounds far more like a thinly-veiled reason to cut funding than it does a rational explanation based on the capabilities of the craft.

Where is this in relation to the recently re-discovered Philae lander?