In the two months since I last checked up on the Rosetta mission, the comet has heated up, displaying more and more jet activity. Perihelion is now only four months away, and the pictures are just getting more and more dramatic with time. 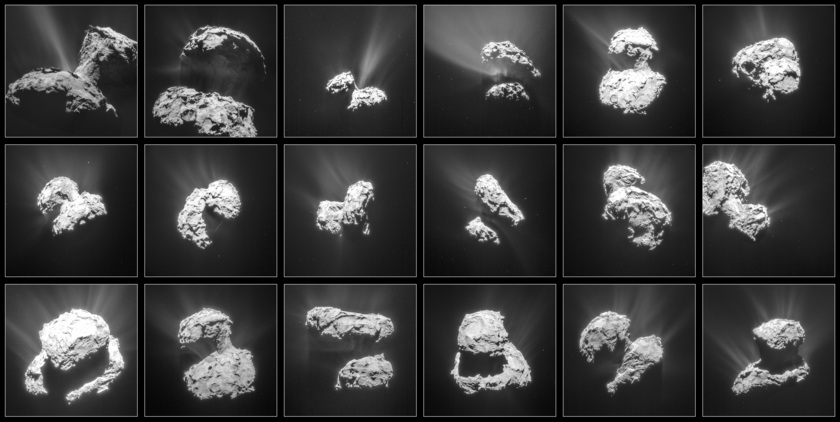 Rosetta has completed two close flybys -- one at a distance of only 6 kilometers, on February 14, and one at a distance of 14 kilometers on March 28. During both flybys, stray comet particles spoofed the star sensors that Rosetta uses to understand its orientation in space. Following the second flyby, pointing was affected enough that Rosetta's high-gain antenna rotated away from its Earth pointing, and the spacecraft eventually entered a protective safe mode. The spacecraft is fine and they are working to bring all the science instruments back online, but the entry into safe mode caused them to travel much farther from the comet than planned, and the navigational problems have forced the mission to replan their future trajectory and, consequently, science. It's all part of the fun challenge of doing something nobody's ever done before: orbit a comet as it approaches perihelion.

Rosetta's long residence at the comet paid off recently, as the OSIRIS science camera fortuitously caught a jet in the act of starting up. In an ESA blog post about the fortunate photos, principal investigator Holger Sierks is quoted as saying: "This was a chance discovery. No one has ever witnessed the wake-up of a dust jet before. It is impossible to plan such an image." In a sense, though, ESA was able to make this lucky observation happen by being at the comet for long enough to catch a lucky break.

A comet bursts into life

Rosetta's OSIRIS wide-angle camera fortuitously captured the moment a jet burst into action on March 12, 2015. The first image was taken at 06:13 UTC on March 12, the second two minutes later.

I've just spent a pleasant morning reading through two months' worth of the Rosetta blog to catch up on how the mission has evolved. Until January, Rosetta was flying in circular, "bound" orbits, with the comet holding the spacecraft to its path. But as the comet has gotten more active and begun to produce more gas and dust, that gas and dust exerts drag on the spacecraft, preventing Rosetta from being able to maintain these bound orbits. Since February, though, it has flown further away, on "unbound" orbits, meaning that the comet's gravity no longer constrains the spacecraft's path. With these unbound orbits, Rosetta must perform regular trajectory correction maneuvers to maintain proximity to the comet.

When your spacecraft's orbit is unbound, a safe mode can mean a missed trajectory correction maneuver and an unplanned excursion. That's what happened during the March 28 flyby, summarized in detail in this blog post. An update from April 10 explains that Rosetta wound up in an escape trajectory and traveled as far as 400 kilometers away from the comet. There wasn't any real danger of Rosetta losing the comet, though, because the speeds involved are very slow and well within the capability of Rosetta's thrusters.

On April 1, a rocket firing began to return the spacecraft toward the comet, and it reached its target distance of 140 kilometers altitude on April 8. It is a terminator orbit, meaning that the spacecraft travels around the comet in an orbital plane that coincides with the night-day boundary, and it sees the comet at roughly half phase at all times. As of that update, the plan was to go into pyramid orbits with minimum altitudes of 100 kilometers throughout the rest of April.

The change in Rosetta's trajectory unfortunately meant a complete replanning of targeted science observations and a reconsideration of the entire orbit strategy, which involved a few more of these close flybys. As of April 10, not all the instruments had been returned to normal operation yet.

Meanwhile, the unplanned excursion from the comet has not affected Rosetta's plans to listen for the Philae lander. Philae mission manager Stefan Ulamec still does not expect conditions to favor Philae's waking until at least next month, but listening campaigns were conducted over a period of about a week beginning March 12 and April 12, just in case.

Throughout all of this work, the NavCam is continuing to photograph the comet to good effect. ESA has begun to release NavCam data using its archive image browser, which presently only contains Rosetta data. It includes NavCam data from the cruise phase of the mission (which was already public; I worked through that archive and blogged about some of the images a while ago), and also includes early images from the comet phase of the mission. As of this writing, it contains images taken through August 1, when Rosetta had approached to within 850 kilometers of the comet. They plan to release images on a monthly basis, eventually catching up to the point that they release pictures approximately six months after the images were originally taken.

I can't possibly include in this post all the great photos they've released in the last two months. I'll pick a few favorites, but also provide links to help you browse. First, some oldies but goodies: photos from October "bound orbits" at 10 kilometers: Three super close up images and another one. The image below contains both "dunes" and a funky sort of foldy lineament. All of the closeup images contain bizarre morphology. 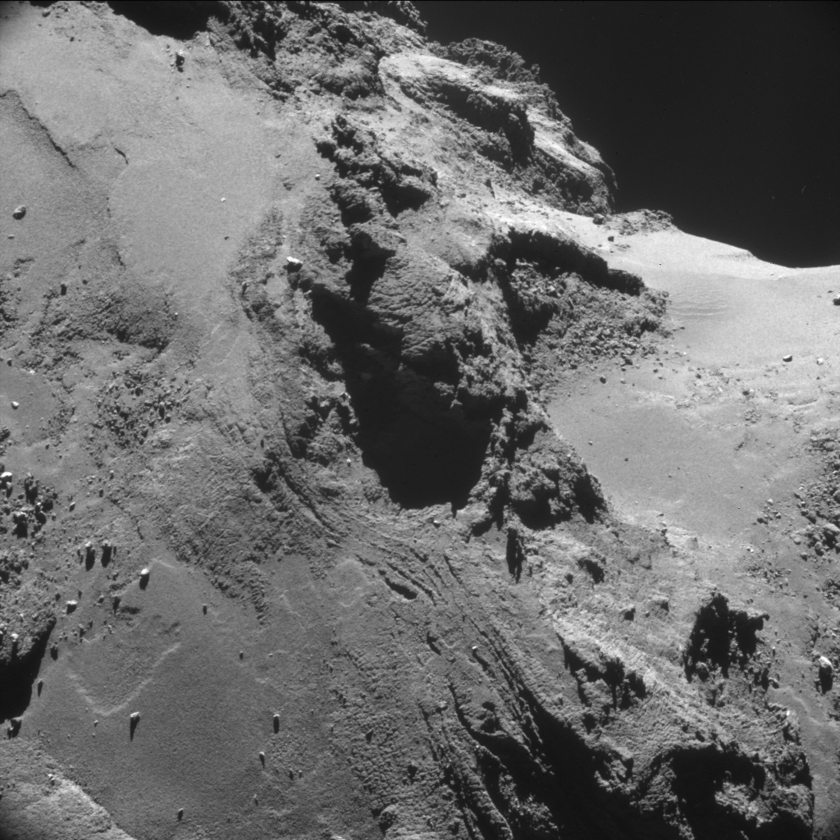 This single frame Rosetta navigation camera image was taken from a distance of 10.1 km from the center of Comet 67P/Churyumov-Gerasimenko on 21 October 2014. It has a resolution of 86 cm/pixel and measures 883 m across. 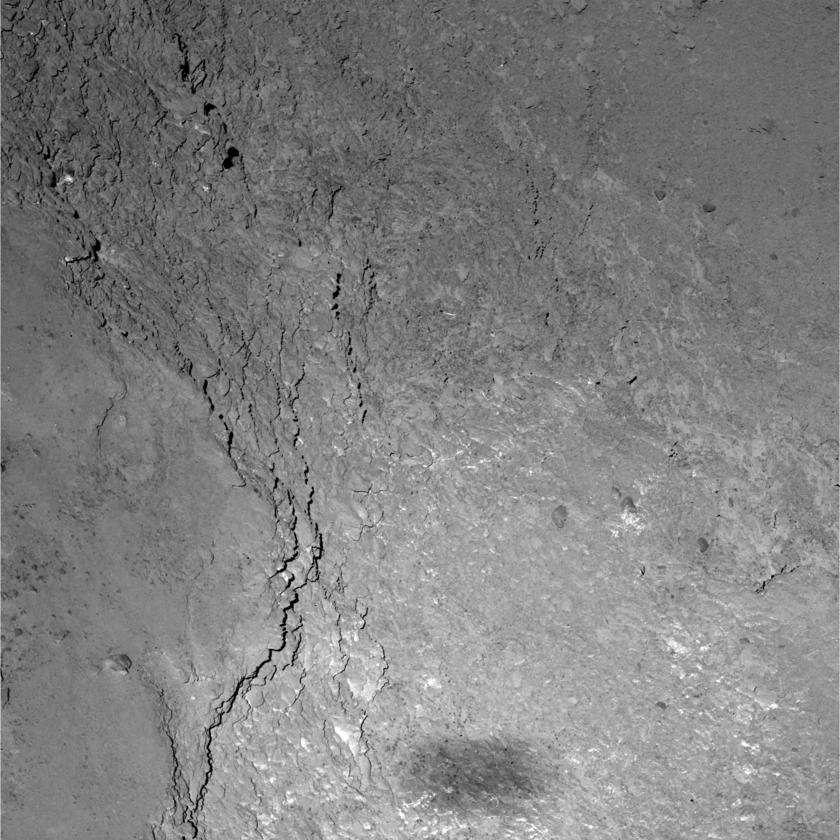 Close view of a 228 by 228 meter region on Comet 67P/Churyumov-Gerasimenko, as seen by the OSIRIS narrow-angle camera during Rosetta's flyby at 12:39 UT on February 14, 2015. The image was taken six kilometers above the comet’s surface, and the image resolution is just 11 centimeters per pixel. Rosetta’s fuzzy shadow, measuring approximately 20 by 50 metres, is seen at the bottom of the image.

I also like this artful crop of a NavCam image that contains such a wide variety of surface types. 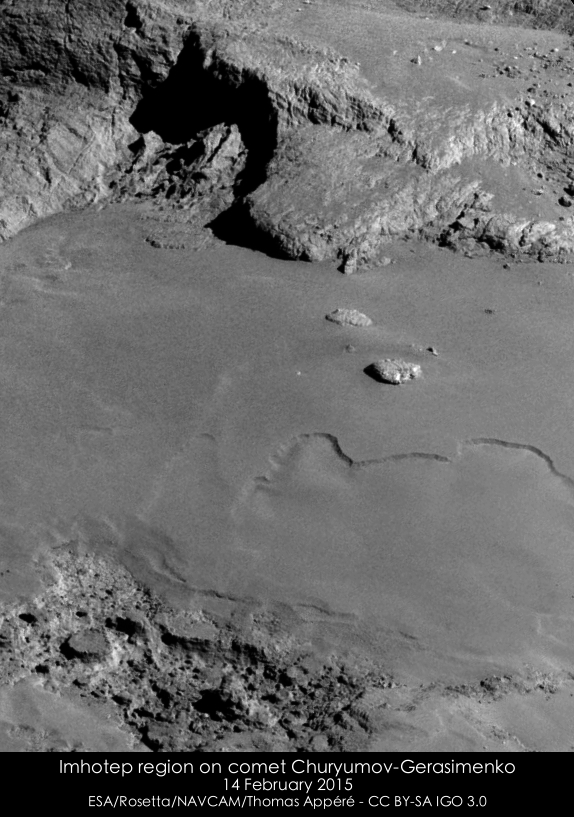 Imhotep region imaged by NavCam camera aboard Rosetta spacecraft on 14 February 2015. This picture was taken from a distance of 8.9 km and the resolution is 0.76 m per pixel. For scale, the circular structure on bottom left has a size of about 40 m. 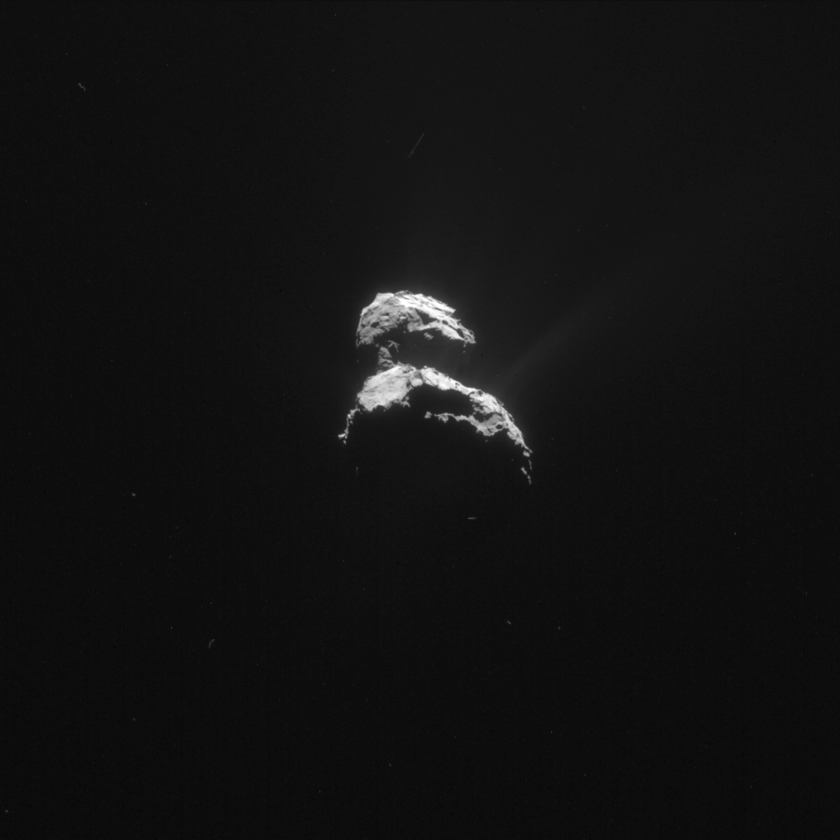 Following its February 14 close flyby, Rosetta receded to 255 kilometers away from comet Churymov-Gerasimenko. It took this photo as it was returning closer to the comet again, on February 18, from a distance of 198 kilometers. The comet wears a crown of erupting gas and dust. The noisy background is a combination of detector noise, background stars, and grains of material ejected from the comet, which are sometimes captured as streaks.

On March 28, Rosetta accomplished another flyby, passing 14 kilometers from the surface (16 kilometers from the center at 13:04 UT. Released images include ones taken from 20.2 km on approach at 09:33 and 09:51; from 16.6 km, just after flyby, between 14:35 and 14:53; and from 31.3 km, 7 hours after the flyby. Here's a striking closeup of the boulders that lie in the comet's neck. I'm intrigued by the subtle scalloped scarps adjacent to the boulders -- is the ground collapsing there with increasing comet activity? 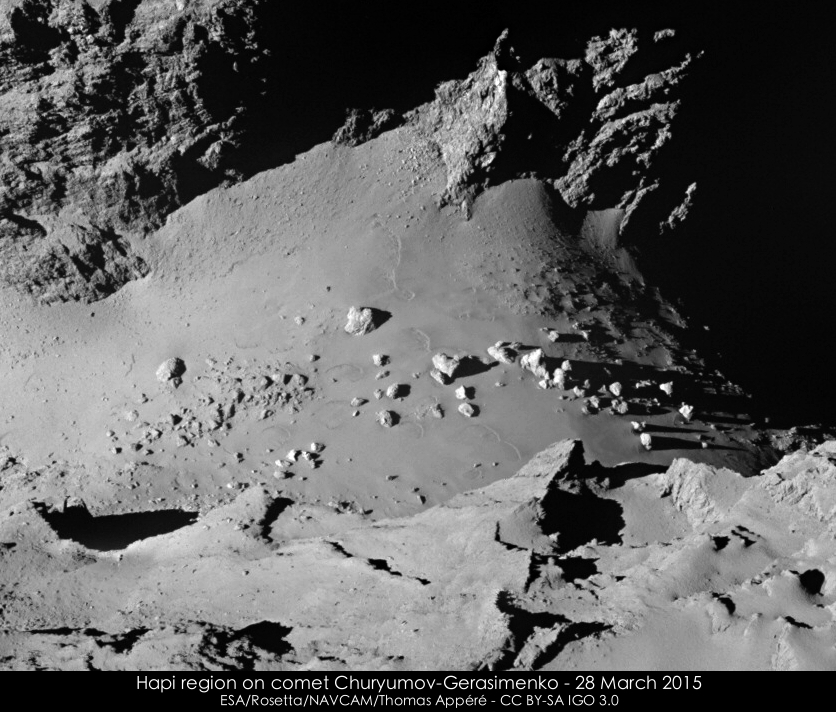 The boulders of Hapi

The Hapi region corresponds to the "neck" of comet Churyumov-Gerasimenko. Boulders scattered on this smooth region cast long shadows. Their size ranges from 1 meter to tens of meters. This photo was taken by the NavCam camera of Rosetta during a close flyby on 28 March 2015 from a distance of 16.6 km. The resolution is 1.4 m per pixel.

And then there's this striking, moody landscape. 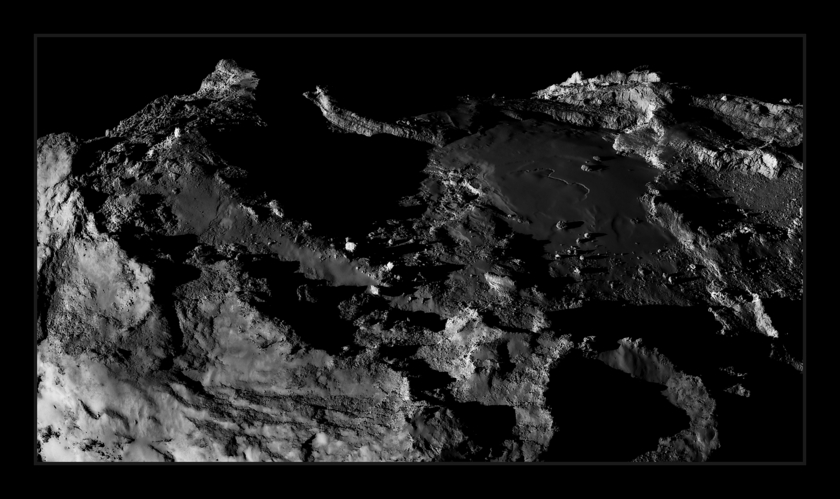 Rosetta captured the images comprising this stunning landscape from an altitude of 20 kilometers just before a 14-kilometer flyby on March 28, 2015 at about 9:50 UT. 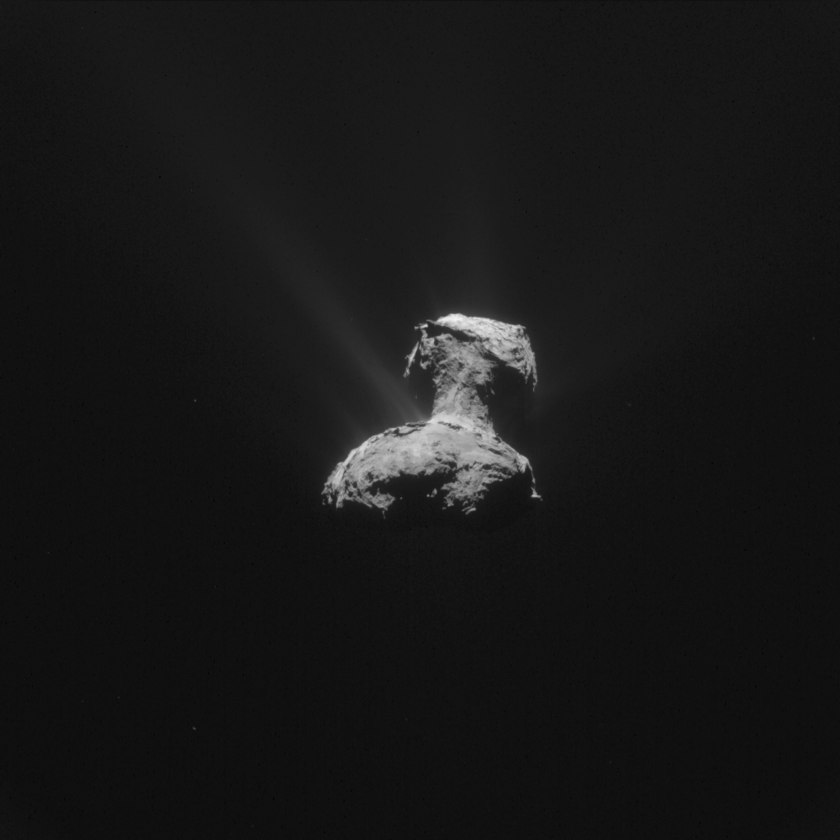 Rosetta kept its distance from Churymov-Gerasimenko in April 2015 following a safing event during its March 28 flyby. This photo was taken on April 15 from a distance of 165 kilometers.

Have not seen much discussion on what the probability is of cometary dust particles causing a "fatal" hit on Rosetta. As the Comet continues to increase in activity I would assume the probablity of disaster increases. Has anyone done analysis on this?? If the particles are of sufficient mass and velocity things could get bad quickly if the Comet suddenly wakes up very quickly.

Hello Emily, I wonder if the rock in the upper left area on this image from October, 1st 2014, is a "small moon" with its shadow on the surface? http://www.frank-specht.de/astronomy/images/Comet_on_21_October_2014_NavCam-frank.jpg

Enthusiast, this blog post here: http://blogs.esa.int/rosetta/2015/04/16/cosima-meet-the-family/ shows that Rosetta is being hit by dust particles all the time. I think they don't move very fast.

Has there been any actual before and after photos that show movement of any of the surface features such as a rolling boulder or sliding surface material?

Good question, Skip. I haven't seen anything like this, except for the before and after shots of Philae's first touchdown area. Hopefully Rosetta will eventually obtain some images of the area around the new jet to see what has changed.

@Astronomy Enthusiast: It's probably unlikely that a small particle would do much damage. The escape velocity for particles from the surface of G-C is quite low, and the orbital speed of Rosetta is about walking speed. ESA's earlier comet probe, Giotto, had protective shields because the closing speed (being a fly by of Comet Halley) was very high - being hit by a particle (even a relatively small one) would have the kinetic energy of a bullet. In fact Giotto's camera was "taken out" because of such an impact and the probe knocked off it's spin axis (it eventually recovered). Given the relative speeds in Rosetta's case this is less likely. The probe could be lost if the "star trackers" got confused and the lock on Earth lost (permanently) OR if a larger object (say one of the "bolders" were to hit Rosetta at even modest speeds). An interesting point is that Rosetta already orbits "inside" the Coma as seen from Earth yet the photographs seem remarkably clear....