The excitement is building for Hayabusa2! The spacecraft is now complete and ready to be shipped to its launch site. JAXA unveiled its next interplanetary traveler to the media in a special event on August 31. Soon the spacecraft will begin its journey to asteroid 1999 JU3 by departing JAXA's Samagihara spacecraft assembly facility for the Tanegashima Space Center. Launch is planned for December. 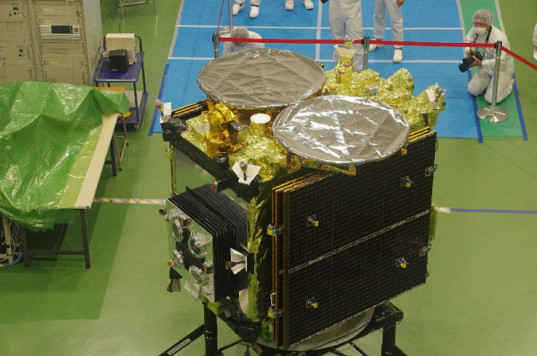 Hayabusa2 is very similar to its predecessor, but there a few differences clearly visible from the outside. The most obvious difference is the switch to two high-gain antennas (one each in Ka- and X-band). You can also see the stowed solar panels and the four ion engines. Looking at the spacecraft from the side: 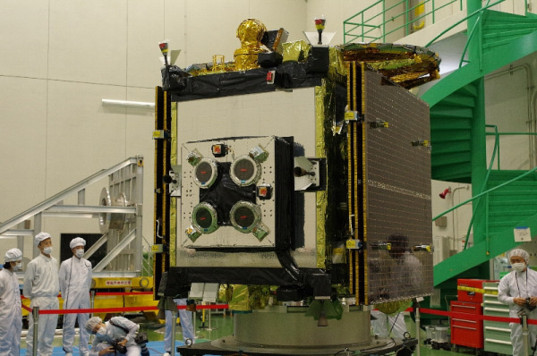 Side view of Hayabusa2

The ion engines are similar to Hayabusa's, but produce more thrust (10 millinewtons as opposed to 8 millinewtons). In this view you can also see the steerable X-band medium-gain antenna on the top deck of the spacecraft (it looks like a gold ball with a black horn angled to the right). You can also see a bunch of little nozzles at corners and edges of the spacecraft, all part of the reaction control system (that is, the maneuvering rockets). There are 12 in total, one at each corner and four on edges. Here's a closeup on one of those little guys: 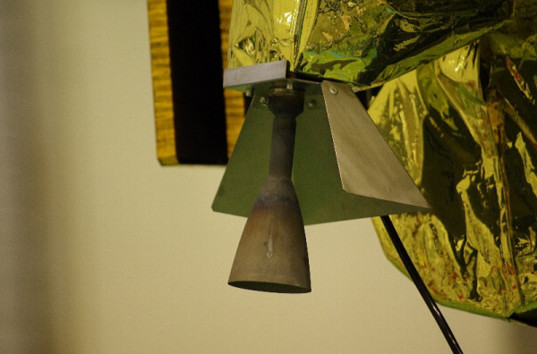 One of Hayabusa2's ion engines

A closer look at an ion engine, which has a "remove before flight" cap on. I'm not sure what the square thing is with the lens cap that says "non flight item" on it. 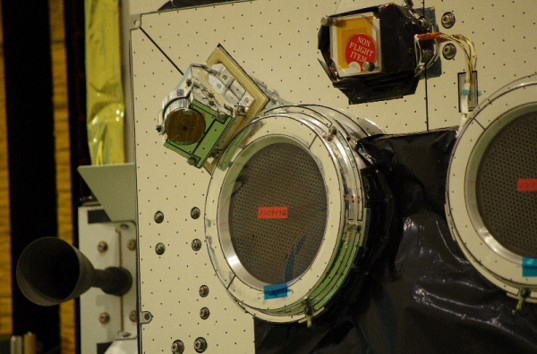 Closer look at an ion engine

Here's a view of the opposite face: 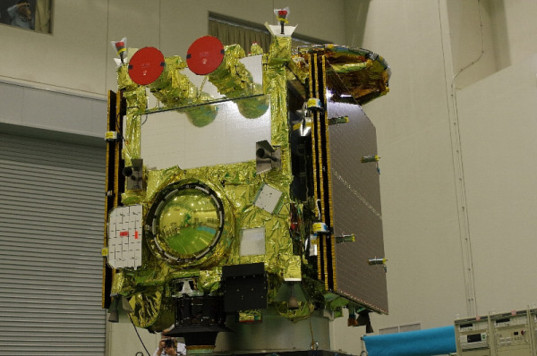 Opposite face of Hayabusa2 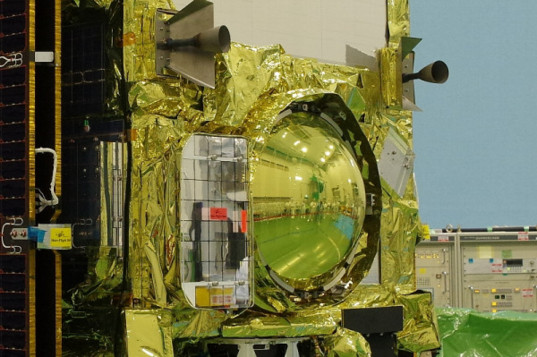 Here's a view of the sampling horn in its stowed configuration: 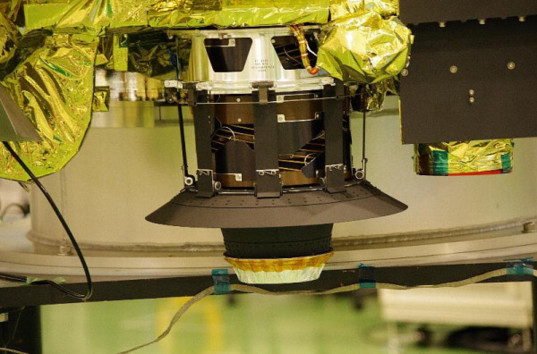 And here's a close-up of the top deck: 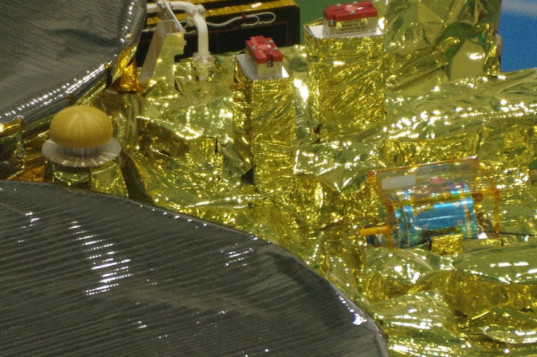 The little mushroom cap between the two high-gain antennas is the X-band low-gain antenna. The little blue thing is DCAM3, a deployable camera that will hopefully take pictures of the explosion and impact of Hayabusa's "Small Carry-on Impactor" while the mothership hides safely in the shadow of the asteroid.

Here's a view of the development test model of the MASCOT lander; the flight one is already attached to the spacecraft (to the bottom, I presume).

If that's not enough photos for you, check out this gallery from the Asahi Shimbun website, or a video from Nikkei.com.

I don't pay too much attention to missions until they're ready for launch. So today is really the first time I've read much about Hayabusa2, and I am just amazed by its audaciousness. Its profile is much like its predecessor's: it'll rendezvous with an asteroid, collect a sample, and return to Earth. But they plan to do so much more at the asteroid than Hayabusa (which I suppose I now need to refer to retroactively as Hayabusa 1) did. Hayabusa2 will deploy one of five target markers that it will use to guide itself into landing and collecting a sample. It will deploy a European-built lander named MASCOT and three (count them, three) "rovers" called MINERVA-II. I put "rovers" in quotes because I think these are not wheeled rovers but rather bouncy hoppers like Hayabusa1's MINERVA (which was deployed but sadly missed Itokawa). Then it will do an experiment like Deep Impact's, releasing an impactor to make a crater on the asteroid's surface. But because Hayabusa2's impactor won't have much kinetic energy, they made it explosive. The mothership will have to hide in the shadow of the asteorid as the explosion happens, so they have also added the deployable DCAM3 to try to get a view of the crater's formation.

Here's a cool video summarizing just the sampling part of the mission:

In the video you can see that, once the crater is formed, they'll descent to take a second sample, transfer it to the sample return capsule, and return it to Earth. So you have a spacecraft; sample return capsule; lander; 3 rovers; 5 target markers; deployable camera; and an impactor. Add up all of those items and the five target markers that Hayabusa2 carries in order to help guide it to its sampling touchdowns, and I get 13 distinct and inedependently operating spacecraft. That's not a spacecraft, it's a colony!

You can read more about Hayabusa2 in this presentation given by Paul Abell to the most recent Small Bodies Advisory Group meeting, or this one by Hitoshi Kuninaka given to the 10th IAA International Conference on Low-Cost Planetary Missions last year. Or follow Koumei Shibata or Avell Shinnosuke on Twitter! Now that the spacecraft is ready for launch I'll be paying much closer attention to this mission. I'll update you whenever I hear news! 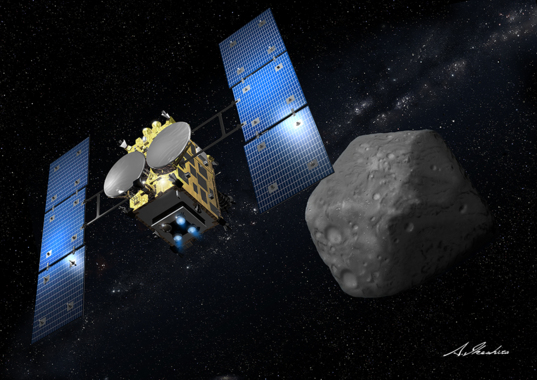 Hayabusa2 will arrive at an asteroid in 2018 to investigate it for one and half years, before returning to Earth in 2020.

another rock with an orbit out to Mars. We could run into the same problems that original had. AKA hard resets, static problems, etc. Here is some info on methane hydrates for when the SOND tries their radio sounding experiments. There might be some weird P wave stuff if different densities of compressed hydrates and fillers http://www.searchanddiscovery.com/documents/abstracts/2004hedberg_vancouver/extended/winters/winters.htm

Instead of Hayabusa 1, i'd go with Hayabusa TOS. It worked for Star Trek.

That sounds like a great mission, it is indeed audacious. Why are we doing any like that?

Matt: We are. It's called Osiris-Rex