A few weeks ago, I received an email from Eric Palmer, representing the Asteroid/Dust archive of NASA's Planetary Data System (apparently a subnode of the Small Bodies Node, a part of the Planetary Data System that I wasn't aware existed). Go to http://sbib.psi.edu/ and click the "Launch Vesta Image Browser" button and you'll find yourself at a map interface to the Vesta data. This is pretty neat. It doesn't do everything one might want it to do, but what it does do vastly simplifies access to Vesta image data. Here's a screen cap:

It's fairly simple to use. Radio buttons turn on and off useful things on the map -- a coordinate grid, feature names, and quads (the quads are from the High-Altitude Mapping Orbit atlas, not the Low-Altitude Mapping Orbit atlas that I also wrote about today). You can click a spot on the map and it will populate the latitude/longitude field in the lower right corner with the position of that point; clicking on "Search" will then bring up all images that contain that point. The positional feature search isn't completely error-free, I assume because Vesta's extreme topography can make it a bit difficult to know precisely whether a spot really is in the field of view or not. But it's pretty good.

Anyway, the search populates a list of specific Dawn images in the lower left. If there are too many results, you can limit it by selecting only certain phases of the mission using the buttons at far lower right. Clicking on one of the images in the search results list plops a footprint on the map, which is extremely useful. It really helps to know whether the feature you want is fully covered in the image or not. Clicking on the image name also pops a preview of the image into the upper-right panel. You can choose to view images either as they were taken by Dawn or in a reprojected form. The ability to switch between the original and reprojected images so easily in the preview window is fabulous.

I tested out the browser by looking for pictures of one of Vesta's beautiful contrasty craters, Cornelia. I thought I'd try to find several frames that could be mosaicked together to produce a high-resolution image of the crater. Finding those frames was extremely easy. I downloaded map-projected versions of several images that overlapped the crater and went to work.

I found that the map-projection of the data is not quite good enough to make it easy to assemble mosaics. The problem, as I've explained before, is that Vesta is so lumpy that the normal way of going about map-projecting data just doesn't work. Usually in planetary mapping you can assume that the body you are dealing with has an ellipsoidal shape -- that is, like a sphere, only it might be a slightly flattened or elongated sphere, but still a geometrically smooth shape. This approximation works really well for planets and larger moons, because they are very smooth. But it breaks down once you get to small enough bodies that their topography is extreme compared to their diameter, so what you really should do is drape the images over a shape model of the asteroid, with all its lumps and bumps. The reprojected images available via this image browser is not doing that; it's using an ellipsoid approximation. Here's what happens when you try to size two Vesta images to the same scale and overlap them. You can see that the shifting perspective of Dawn, combined with Vesta's topography, makes the images overlap okay in some areas and poor in others.

Comparison of two map-projected Vesta images of the crater Cornelia

But, to my delight, the Photomerge feature in Photoshop was able to cope with the shifts in perspective. The resulting image is not a product on which science should be done, because the tricks Photoshop uses to make images appear to align may have actually cut out some terrain, exploiting high-contrast edges to hide the seams. But it produces a visually pleasing product. Unfortunately, as far as I can tell, there's no high-resolution image data to fill in that gap in the corner; I'd have to fill it in with data taken from a higher orbit. 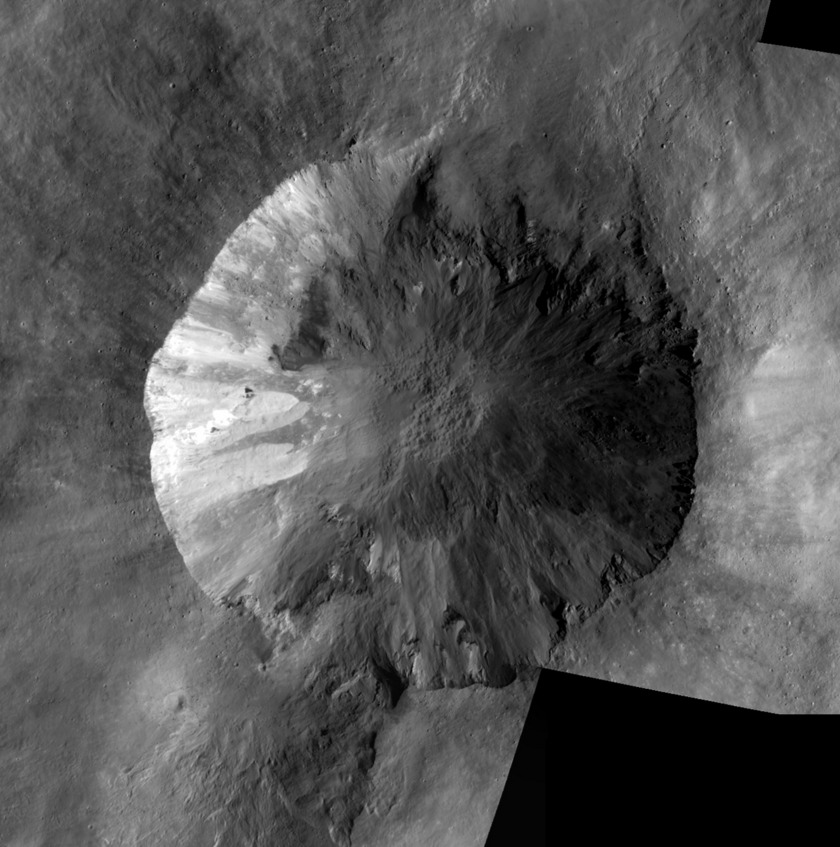 Looking at the Atlas of Vesta that I also wrote about today, you can see that there really is a data gap in that corner, which is a bit awkwardly filled in with a melange of other images. That reassures me that the Small Bodies Node's image browser really is doing a good job of providing me with all the available data that I ask for. Great! 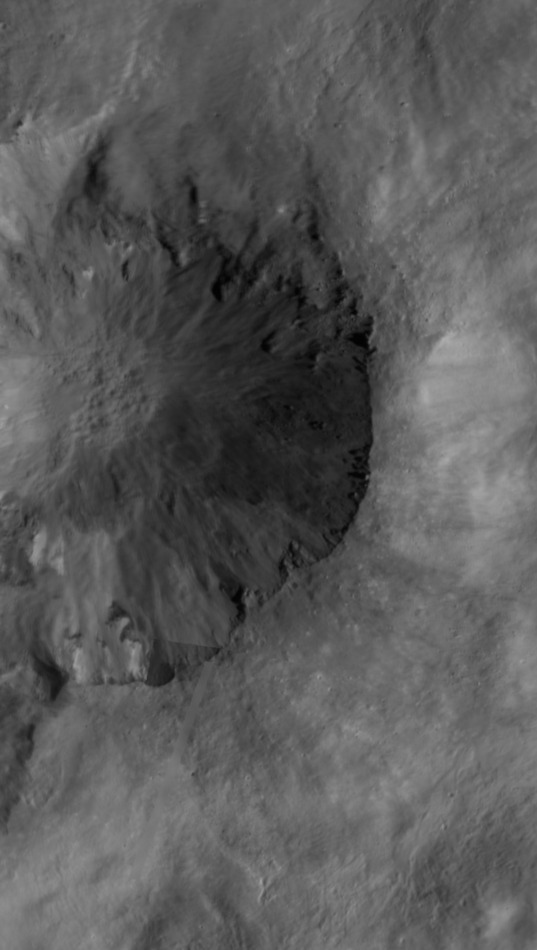 For the purposes of the Atlas, Vesta’s prime meridian (zero degrees longitude) passes close to the tiny crater Claudia, measuring approximately 620 m in diameter, at 1.66°S and 356°E. All positions used by the Dawn project are in that Claudia system.

But this Vesta image browser uses the IAU-defined coordinate system, as descibed in their About page:

This software uses the PDS-Vesta-2012, as approved by the IAU. This system is also known as the "Claudia Double Prime." The prime meridian goes through the Olbers region, following the coordinate system established by Thomas et al. 1997. The Prime Meridian is 150.7 degrees east of the crater Claudia.

It's this dispute about which coordinate system to use that delayed the public release of Dawn image data. The image data all out now, and released with that image data is an explainer describing the four (yes, four!) coordinate systems in use for Vesta. The problem is, according to that explainer, the Prime Meridian in the Claudia Double Prime system is located 214 degrees east of the crater Claudia, not 150.7 as it says on the Vesta image browser About page. I did check in the browser map, and it does have Claudia crater correctly located at 1.6 degrees south, 146 degrees east as it should be in that coordinate system.

It all makes my brain hurt. But the pictures are pretty, no matter what numbers we use to describe them!