Last week was the European Planetary Science Congress in London, and there's been a lot of science news. One thing that caught my eye Friday was the publication of an atlas for Vesta. Even though people don't interact with printed maps all that often anymore, it's still traditional to split a world into numerous map "sheets", or quadrangles, as shown below for the latest Vesta atlas: 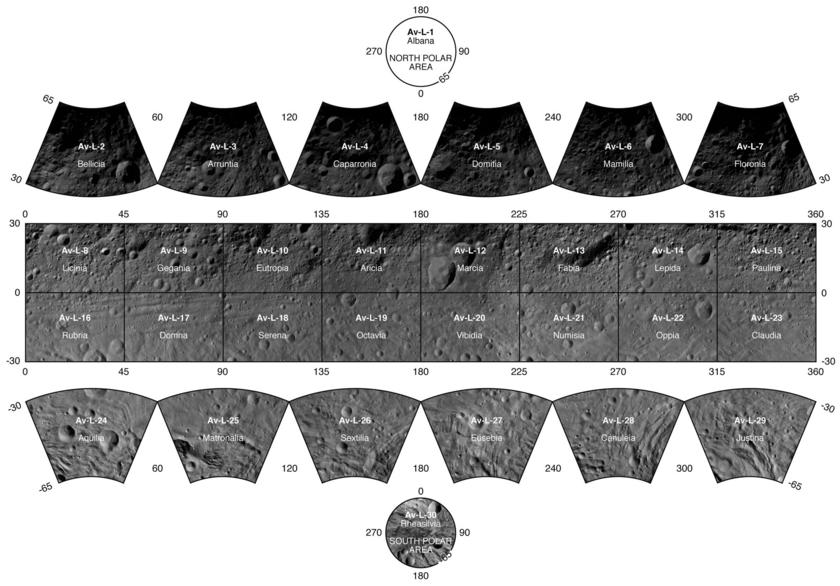 This atlas of the giant asteroid Vesta was created from images taken as NASA's Dawn mission flew in its Low Altitude Mapping Orbit, at an altitude of about 210 kilometers. The set of maps was created from mosaics of 10,000 images from Dawn's framing camera. Full-resolution photo maps and PDF versions of each map with topographic information are available here.

Notice that one of the sheets is blank -- alas, spring had not reached Vesta's northernmost latitudes by the time Dawn had to depart Vesta for its journey to Ceres, so that section will likely remain blank for a very long time. (I'd like to think it'll get filled in some time in my lifetime. Yes, tthat's a challenge.)

These photomaps have been painstakingly crafted from huge amounts of image data -- more than 10,000 images -- returned by Dawn during the Low Altitude Mapping Orbit phase of the mission, when it was orbiting at an altitude of 210 kilometers. Dawn was not originally planned to achieve complete global coverage of Vesta in this orbit, and in fact there are some gaps in the data; but the gaps have been filled on these photomaps with lower-resolution imagery from the High Altitude Mapping Orbit, and the final products are just lovely. For each quadrangle they have released a map-projected image, as well as a map sheet where the image has been labeled with topographic contours and place names. Smaller inset maps show your location on Vesta and two different visualizations of the local topography. 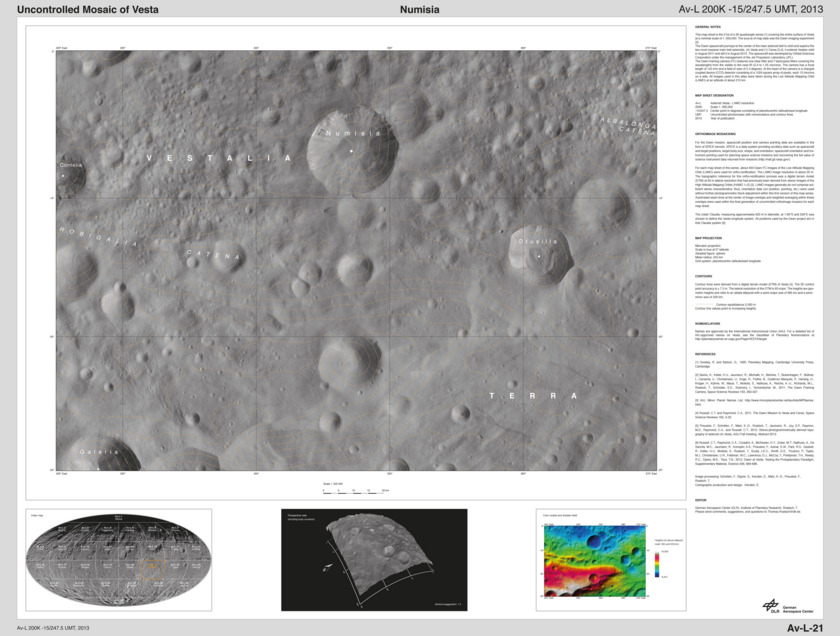 Allegedly there will be a companion set of map quadrangles comprising the Vesta Atlas of Spectral Parameters, using data from dawn's Visible and Infrared Mapping Spectrometer, which will allow researchers to correlate topographic features with color data from which they can infer the composition of the materials exposed at the surface. I can't find any high-resolution version of the Atlas of Spectral Parameters online yet. I assume we are waiting for a peer-reviewed publication on it. In the meantime, here's the little thumbnail version that is available online. 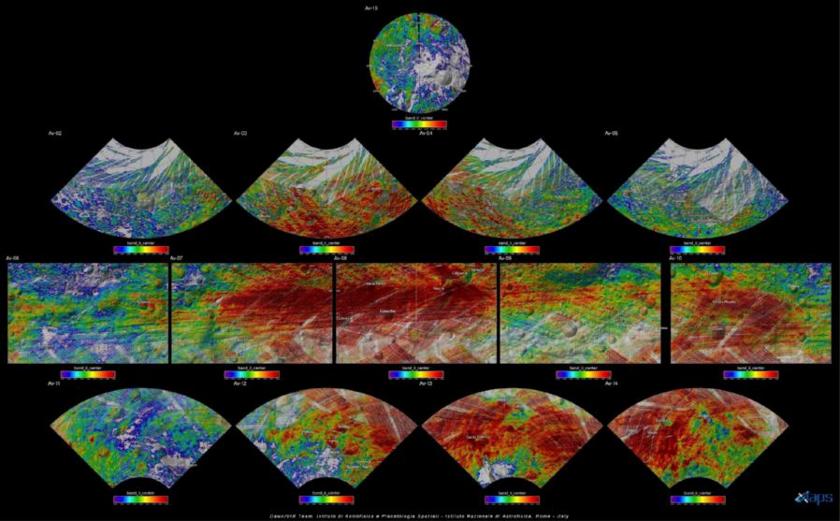 A full resolution version of this map should eventually be available at the INAF website.

So these maps are very handy. Except for one thing. The "quadrangles" into which Vesta has been divided for these maps are not the same "quadrangles" about which people have published conference abstracts describing their geologic mapping. Compare the "Numisia" quadrangle I posted above, with the "Numisia" quadrangle described by Debra Buczkowski and coworkers in recent LPSC and EGU abstracts (PDF).

It took me a little while, but I figured out what was going on there. This is actually the third atlas of Vesta published by the German Aerospace Center (DLR). Dawn's mission to Vesta proceeded in several stages, with the spacecraft performing many orbits at one altitude before transitioning to a lower altitude. The previous two atlases were ones based on data taken during the Survey phase (altitude 2700 kilometers) and the High Altitude Mapping Orbit (HAMO) phase (altidude 680 kilometers). At higher altitudes, the camera had lower resolution. Consequently, The Survey atlas was split into only four sheets, and the High Altitude Mapping Orbit atlas had fifteen sheets. All three atlases are available for download from the DLR website. One thing that's cool to compare among the three atlases is how the Sun reached farther and farther north as the season shifted during Dawn's mission to Vesta, revealing more of the map.

Anyway, the abstracts about geologic mapping that I'd seen before were maps on High Altitude Mapping Orbit base maps. At some point in the future, then, we can expect to see geologic maps drawn on the most recently released, Low Altitude Mapping Orbit base map. I wish they'd generated unique quadrangle names for each of the atlases, to avoid confusion. But they didn't ask me! Quibbling aside, they are lovely maps.

There's another cool map of Vesta that was released recently -- check out today's other Vesta mapping blog post for more on that.