Opportunity and Curiosity updates: Rolling and drilling and a little wear on the wheels

For most of April, while Mars scuttled behind the Sun as seen from Earth, both Mars rovers were pretty inactive. Now that conjunction has ended, both are doing what rovers should be doing: roving and exploring.

Oppportunity's last view of the work area at Matijevic Hill before heading southward toward the hills of Solander Point, in the distance.

After conjunction, Opportunity wrapped up her work at Matijevic Hill with some APXS work on a light-toned outcrop of rock named Esperance. In an update posted to the JPL website on Friday, Steve Squyres explained why it was worth sticking around at Esperance after conjunction:

"What's so special about Esperance is that there was enough water not only for reactions that produced clay minerals, but also enough to flush out ions set loose by those reactions, so that Opportunity can clearly see the alteration," said Scott McLennan of the State University of New York, Stony Brook, a long-term planner for Opportunity's science team.

This rock's composition is unlike any other Opportunity has investigated during nine years on Mars -- higher in aluminum and silica, lower in calcium and iron.

So this is what Squyres was so excited about at the Lunar and Planetary Science Conference two months ago. Here's what I wrote about his presentation then:

There was one last enigmatic thing that Squyres mentioned during his talk. Whitewater Lake, and Shoemaker Ridge above it, are both shot through with calcium sulfate veins. But there's another spot with some intriguing boxwork veins, and preliminary APXS results show that it has a "very interesting composition," but Squyres was mum on what that was, only that it was "exciting."

Opportunity is wrapping up work on this spot. The rover will spend solar conjunction (which is most of April) examining Boxwork with the APXS, then will head south to the next bit of Endeavour crater rim, where the orbital signal of clay minerals is much stronger.

Since then, Opportunity has put the pedal to the metal, clocking about 100 meters per drive on sols 3309, 3310, and 3312. She's running along the slope, keeping to Cape York. This was the view on sol 3308; the rover drove due south 100 meters, then took a slight angle to the right for another 200, keeping to the same elevation along the inner rim of Endeavour.

Another two such drives will have her into "Botany Bay," the gap between Cape York and the next bit of Endeavour rim, named Sutherland Point, and then Nobby Head. As A. J. S. Rayl explains in her latest update, they'll take a short break at that location for some science and scouting of possible safe haven locations, but then they'll scuttle on south to Solander Point, where they'll spend the winter. The equinox is on July 31; they want to be at Solander Point by then, so that they can crawl around doing short-distance science until they have to park on a north-facing slope to wait out the winter.

Meanwhile, over in Gale crater....

Curiosity has finally rolled again after more than three months parked at John Klein. On sol 272 (May 12), the rover moved about 2 meters -- backing up, turning, and scooting forward, accomplishing essentially a shift of a meter to the right of her previous position -- to reach a site called Cumberland to perform a second drill. That was the first drive since sol 166 (January 23). Here's a nice Navcam panorama taken on sol 275. The view hasn't changed much. You can see the two drill holes at John Klein just above the rover's "shoulder" if you enlarge the image.

Curiosity backed up, turned to the right, and drove forward again on sol 272 to reach the second drill site, named "Cumberland." The first drill site, "John Klein," is visible over the rover's shoulder. The arm is in the "ready out" position. Curiosity drilled at Cumberland on sol 279.

And hallelujah, yesterday they drilled:

Here's a 3D view of the drill hole. 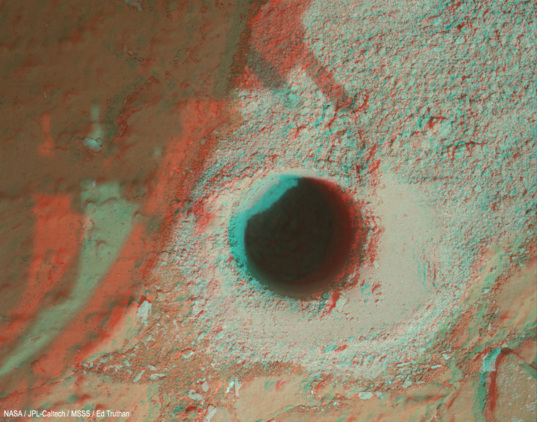 On sol 279, Curiosity drilled at her second site on Mars, named "Cumberland." The hole is about 1.6 centimeters in diameter and about 6.6 centimeters deep. More formats: Left stereo | Right stereo | Flicker gif

On sol 275 they also checked out the state of the wheels. It's so cool they can use the MAHLI camera on the end of the arm to do this. There's something so satisfying about seeing the wheels in contact with the ground.

Curiosity checked on the condition of her wheels on sol 275, after making a short drive from John Klein to Cumberland.

Let me caution you against something if you enlarge this photo. Many people look at close-up images of the wheels and get very worried about their condition. They show a lot of little dents and dings. Mars' surface is covered with gravel, much of it pointy, and this is a very heavy rover riding on wheels that are made of aluminum. They will acquire dents. Once in a while, they will get big dents. Who knows, at some point we may see a hole ripped through the thin aluminum between the treads. Don't fret. The dents will not affect the rover's ability to drive. I've been assured that even if the rover's wheels were replaced with square ones, the rover's motors would have the power to propel it across the surface. Here's a post at unmannedspaceflight.com containing a slide that actually says the "wheel cleats and surfaces [were] thoroughly tested for odometry, wheel impact, functionality -- localized denting & rupture, ovalization permitted." So don't worry about those dings; they're expected.

Safety First!.. are Curiosity and Opportunity wearing protective equipment, i.e., goggles and a hard hat?! If not, are we talking an OSHA violation! lol

Thanks for the article and the wonderful photos!

Indeed it was a successful mission and provided us with a glimse of the bedrock and associated structures. I am still curious about its capability to analyze minerals and procure elemental signatures given the size of the debris.