It's always awe-inspiring to see our great world as just a tiny spot within vast space. The latest spacecraft to get such a view of Earth and the Moon is the Jupiter-bound Juno. 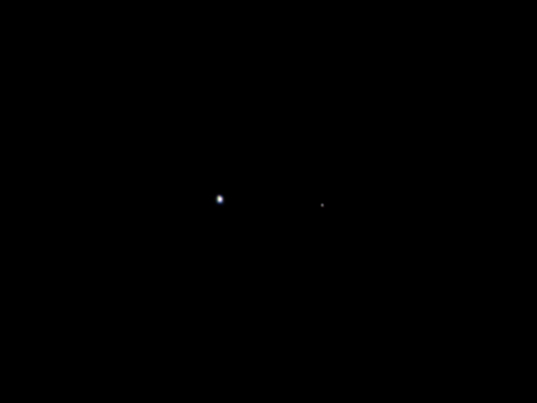 This image of Earth (on the left) and the moon (on the right) was taken by JunoCam on the Juno spacecraft, three weeks after its August 5 launch. On August 26, 2011, the spacecraft was already almost 10 million kilometers away from the Earth-Moon system.

This is very low-resolution; not much detail is visible from so far out. JunoCam is a pretty wide-angle camera (with a 70-degree field of view) because it's designed to be operated pretty close to Jupiter. I think we'll probably be getting better pictures of Earth and Moon from Juno in two years, when the spacecraft makes a return visit to Earth for a boost onward to Jupiter.

Congratulations to the Juno team on an apparently successful instrument checkout!