EDIT 22:31 UTC: Ooops. I misidentified a moon -- two moons, actually. These images contain Dione and Tethys but not Enceladus. Thanks, Jason, for the correction, and apologies for my mistake! 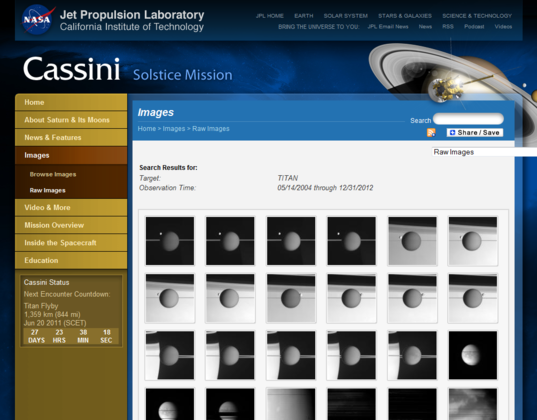 These images are cool enough in black and white, but the imaging team commanded Cassini to cycle through the proper filters to capture the view in color: red, green, and blue, and a clear-filter image for good measure. (You can always tell the blue ones at a glance because Titan and Saturn, which are orange and yellow, appear darkest in the blue-filter image). In one of the sets -- the one in the third row -- they've even taken one image through a filter in which methane is transparent, which allows a tantalizing glimpse of fuzzy details on Titan's surface.

I've described before the process of assembling such images into color views, and even written a bunch of tutorials on the subject. If I had access to a decent image-processing computer I would use the clear-filter images as a base and register all the moving parts of Saturn, Enceladus, Titan, and rings to the clear-filter pic, producing something really spectacular to see. This will be a challenging one to assemble, so I wouldn't recommend it to a beginner. But it'd be so rewarding in the end!

A final comment -- this kind of quadruple conjunction, where Cassini, Titan, Enceladus, and Saturn were all within a few hundred kilometers of being on the same line through space -- must be exceedingly uncommon. It can only happen when Cassini's orbiting in the plane of Saturn's rings, because Enceladus and Titan never leave that plane. And Cassini does spend a significant chunk of its mission in the ring plane, to facilitate flybys of Saturn's moons. Still, it can't be that common to see Enceladus and Titan pass each other while Saturn's in the background. But Cassini's been at Saturn for nearly seven years now, and the more time you give a mission, the more time it has to see spectacular sights, the more opportunities there are for its crafty controllers to capture those sights in images. Here's to six more years of spectacular sights!