A lot of attention has been paid recently to a storm in Saturn's northern hemisphere that is large and bright enough to be visible from Earth, but Saturn's atmosphere actually features lots more swirling storms. They can be hard to see, at least in visible wavelengths. Saturn usually looks much more bland than Jupiter, but there actually are Jupiter-like belts and storms just underneath the visible cloud tops. Cassini's Visual and Infrared Mapping Spectrometer (VIMS) can peer through the methane in Saturn's uppermost atmosphere to reveal Saturn in all its stormy detail. Here's an animation of Saturn's southern hemispheric storms rotating with Saturn, produced from archived VIMS data by Daniel Macháček.

VIMS data, like the data from Cassini's main cameras, is freely available to the public, but it's a bit harder to understand. Imaging spectrometers split incoming light into its component wavelengths, and measure the intensity of each point in each wavelength. A mapping spectrometer can do that task for many points simultaneously, building up an image that is incredibly rich with color information. VIMS images contain information on 352 different wavelengths of light from ultraviolet to the mid infrared, captured simultaneously. This is 15 or 20 times higher spectral resolution than the cameras, but the spatial resolution of VIMS is roughly 100 times lower than the resolution of the narrow-angle camera. The VIMS field of view is about half that of the wide-angle camera, or five times that of the narrow-angle camera.

VIMS produces what scientists refer to as "image cubes." A monochrome image is two-dimensional: it has information in two spatial directions (x and y, or north-south and east-west). A color image adds a third dimension: wavelength. But ordinary color images only have information along three points along the wavelength dimension. VIMS has a lot more depth, 352 points along the wavelength dimension. As a result, VIMS "images" are truly three-dimensional data entities.

Daniel's animation is cool but it doesn't take advantage of VIMS' awesome spectral depth; the color is based on only three wavelengths from the 352 in a VIMS cube. The images of Saturn below are based on much more of the VIMS data; Gordan Ugarkovic convolved all the data from visible wavelengths with a model of how the human eye responds to light at different wavelengths to produce these views of Saturn as the human eye would perceive them. 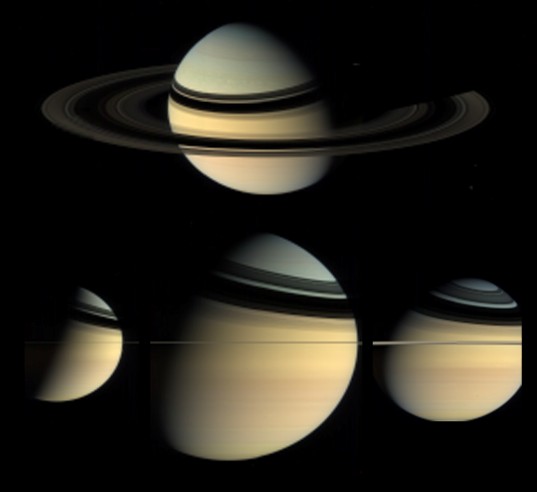 Cassini's Visual and Infrared Mapping Spectrometer lacks the spatial resolution of the cameras, but it achieves much more accurate color. The top image is a mosaic of 9 VIMS data cubes; the bottom row shows Saturn as viewed between 2006 and 2008.

Gordan actually wrote his own software to process VIMS cubes into PNG images, and made it available to all at unmannedspaceflight.com. There's even a version of the tool to make these pretty RGB images. And the data is much, much easier to find than it used to be, thanks to the Rings Node of the Planetary Data System, who have made it easy to browse the VIMS data set using their OPUS search tool; Here's an explanation by Mark Showalter of what the preview images show.